The Kind of Painting That Stops You in Your Tracks

The story behind Hiba Jameel's award-winning painting of Saddam Hussein and Donald Trump. 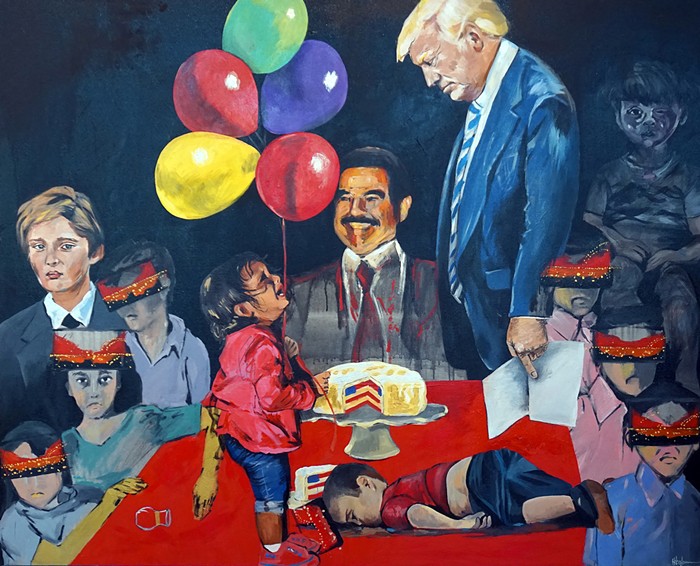 I was inside the A/NT Gallery at Seattle Center when I saw through the window a mom outside pushing a baby carriage. She stopped, scooched the baby carriage over, pressed her face to the gallery window, and looked for a long, long time.

After a while, she fished her phone out from a pocket in the pram and took a picture. Most people outside were splashing around in the International Fountain or sprawled on the grass. It was a play-in-the-sprinkler kind of day, but this mom with a kid was stopped by a painting.

The painting that made the mother stop depicts a birthday party. There are colored balloons and a cake from which a slice has been cut so you can see red and white layers and a square blob of blue.

The six boys and girls at the table are facing you, wearing what look like falling-down party hats. On second thought, they look like the black boxes tabloids put over eyes to block people's identities. Except these aren't only black; they're also orange and red with dots of yellow, tiny cityscapes of night. A man at the head of the table grins. He's dressed in a suit and tie, but his clothes are dripping blood: It is Saddam Hussein.

When Iraqi American Hiba Jameel first made this painting, she called it The Gulf War Was a Piece of Cake. She was 8 during the first Gulf War, and she played with shrapnel that fell on her street. She saw on TV the lavish birthday parties Saddam Hussein threw for himself while she and her family, like most Iraqis, didn't have enough to eat. The night the war began, her parents told her, as bombs fell on their city, to pretend it was a video game.

The first version of the painting was part of an exhibit of Jameel's at A/NT Gallery back in March. But then the US government started separating refugee parents from their kids at the border, and Jameel, who came here as a refugee in 1998, began to add stuff to the painting. She added stuff to it like history does, one thing crammed next to something else, or layered over, the stuff before still underneath whether you can see it or not.

Now next to Saddam Hussein stands Donald Trump, and joining the solemn-faced kids at the party are children we've seen a million times on the internet, TV, the cover of Time, either crying for mom or dazed in a van or washed up dead on a beach. Plus Barron Trump. Barron is a human, not a metaphor, but he stands in here for lots of us: well-dressed, alive, white, a bystander.

He doesn't care about politics. It has nothing to do with him. The title of the work is now I Really Don't Care, Do U? When is care something more than what you wear? When you do something about it. (If you're looking for ideas, the Northwest Immigrant Rights Project needs money and volunteers.)

I Really Don't Care, Do U? will be on exhibit at A/NT Gallery through August 25. It recently won an anti-Trump art contest held by an experimental news media group called Rapid Response Unit in the UK. The prize? The painting is heading to Washington, DC, where it will join the collection at the Newseum news museum.

Comments 7
Tags: Visual Art
The Stranger depends on your continuing support to provide articles like this one. In return, we pledge our ongoing commitment to truthful, progressive journalism and serving our community. So if you’re able, please consider a small recurring contribution. Thank you—you are appreciated!
CONTRIBUTE NOW