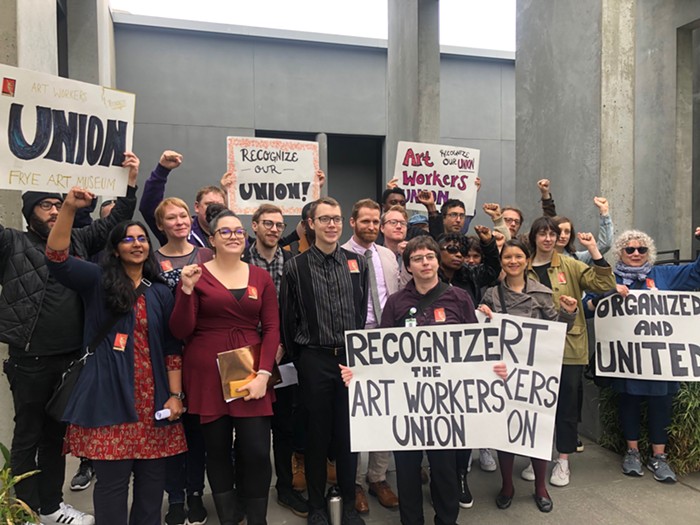 The Art Workers Union is comprised of security guards who work at the Frye Museum of Art. Jasmyne Keimig

Friday morning the Art Workers Union gathered in front of the Frye Art Museum's main entrance to call for the board of directors and CEO Joseph Rosa to voluntarily recognize the newly formed union, which consists of the Frye's security staff.

Across the street, noise from the construction of twin 33-story luxury high rises being built by Vancouver developer Westbank Corp. on the Frye's former parking lot almost threatened to drown out the voices the workers. The metaphor was lost on absolutely no one.

Stickers and flyers with a 1920 Soviet May Day poster the museum itself tweeted out on May 1st, but altered to add AWU, the initials of the union, were handed out to the crowd.

"We're doing this because we love the Frye Art Museum and we love working here," said Caitlin Lee, who has worked as a security guard at the Frye since 2017. "But if something doesn't change we're not going to afford to keep working here."

Most of the security staff at the Frye have college degrees and are artists themselves, but Lee says they're stuck making minimum wage and working part time hours with no benefits.

These conditions make it nearly impossible to live in a city where workers need to make at least $26 per hour just to afford a studio apartment. To illustrate the issue, Lee mentioned a coworker who is currently sleeping on a couch in south Seattle, commuting an hour to get to work, and another who had to put off surgery because they couldn't afford the cost.

Often, Lee said, security staff end up working a second job just to get by, but they end up losing shifts at the museum because of timing conflicts that arise when trying to coordinate with other jobs.

"At a certain point watching your coworkers struggle just to afford to live in this city, you can't ignore that much longer. We all love working here and this is a necessity," said Lee. "We're doing this because we have to."

Of the 12 security guards on staff, 11 are officially members of the union. At the moment, AWU is focused on being recognized by the museum so that they can begin the bargaining process. Once recognized, issues of top priority include equitable wages for the staff, expanded hours, health care benefits, and transit passes for part time workers.

In a statement, the Frye says that they were "notified yesterday afternoon by our security staff of their intent to unionize and asked that we review their request with our board. We look forward to beginning a discussion with them to understand their position." 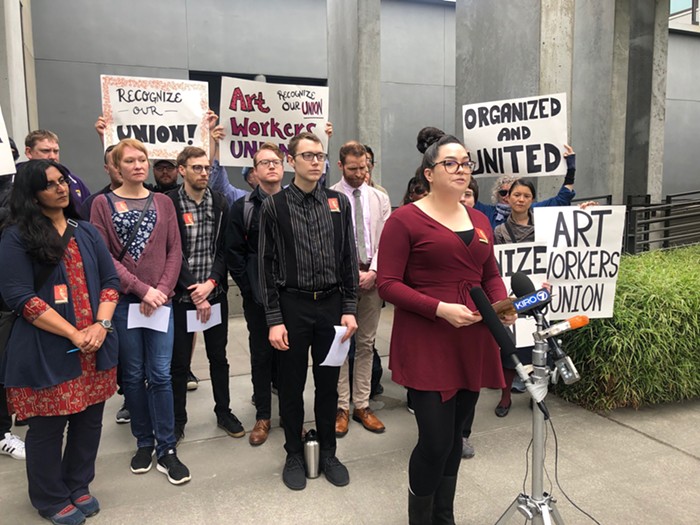 AWU member Caitlin Lee speaking outside the Frye this morning JK
Joining the AWU in solidarity with their cause were District 3 Councilmember Kshama Sawant, District 4 city council candidate Shaun Scott, members of the Democratic Socialists of America, and other union members from around the city.

Councilmember Sawant promised that her office will do everything in its power to support these workers in their fight for "dignity, good pay, and respect at work, and for their right to housing affordability in Seattle."

She called on Frye management and the board of directors to recognize AWU without delay and to promptly begin negotiations, connecting the workers' struggle to issues of rent control without corporate loopholes, publically owned and operated affordable housing, and the necessity to tax major business who make billions off our communities here in Seattle.

"It is also not acceptable for the Frye Art Museum, a free museum, that says it is a 'living legacy of visionary patronage and civic responsibility' to pay its talented workers such paltry wages," said Sawant. "I invite Frye board of directors to practice civic responsibility and start right here today by recognizing the Art Workers Union." A sticker with a 1920s Soviet-era May Day poster on it with AWU's initials JK
Kelly Cox, a long time member of SEIU Local 6, and Renee Holmes, an organizer from the Chateau Apartments, echoed Sawant's calls for AWU recognition and the need for rent control and affordable housing here in Seattle so that workers are not overly rent burdened.

“It's definitely the case that there were a lot of people who have been celebrating the demise and the decline of organized labor over the last thirty or forty years in this country,” said Scott, who spoke last. “So workers who are getting together to organize today are making a very loud statement that labor is entitled to everything it creates in this city and that we have a right to be in this city.”

***
The AWU isn't the first group of museum workers in the country to unionize. Earlier this year, staff at the New Museum in New York City demonstrated their desire to join UAW Local 2110—a desire that was not met warmly by the higher-ups. Staff at the Brooklyn Museum have also made moves towards unionizing some of their workforce. Like the AWU, most cite a need for a seat at the table and the necessity of better wages for staff who live in increasingly expensive and crowded cities.

If its management recognizes the union, the Frye would be the first museum in Seattle to unionize. But other areas of the city's arts community have enjoyed the benefits of a unionized workforce. Stagehands, technicians, and other theater workers can join the local chapter of the International Alliance of Theatrical Stage Employees.

“We're doing this because we care about the Frye and we care about future employees of the Frye," added Lee. “We know we're not alone. We know that other museum workers are also facing similar hardships and it would be amazing to see other art museums rise up and join with us.”

Tonight, the Frye is opening two new exhibitions. Security guards will be wearing their stickers—show up and support.