Shoreline Prudes Cover Up Nippleless Mannequin at the Library 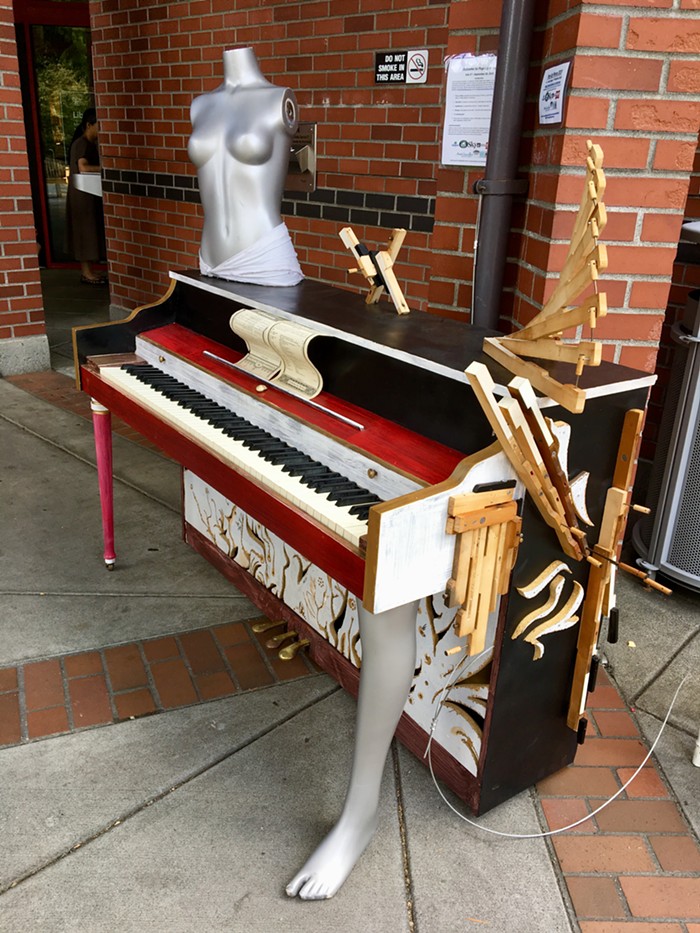 Free the nippleless. O. / Typonexus
The city-county border is just a line on a map, but somehow crossing from Seattle into the rest of King County turns up the prude-o-meter. While by no means as serious as the vitriol that drag performers have faced in south King County at Drag Queen Story Hour, yet another King County library has found that pushing the envelope in even the slightest way can invite head-scratching complaints.

The scandalous item in question is a female mannequin torso—breasts but no nipples—salvaged from the demise of Macy’s at Northgate Mall. Intrepid City of Shoreline public art coordinator David Francis dumpster dived the mannequin, among other detritus of late capitalism, and offered it as raw material to artists decorating pianos as part of the tidy suburb’s 2019 edition of Pop-Up Pianos.

O., the local artist behind boutique art and performance outfit Typonexus, created a “sculpturally enhanced piano” that situates the mannequin atop the piano with a loincloth covering the groin area but leaving the chest exposed. The piece, called “Rise, Come to Light, and Sing Forth, Anima,” was installed in front of the Shoreline branch of the King County Library on July 17. It quickly elicited a negative reaction.

Librarian Deirdre Miller requested that O. modify the piece to address patron concerns, a proposal the artist did not receive well.

“The demand to modify or remove the art installation is deeply alarming,” O. told The Stranger. “Unclothed mannequins are not uncommon in street-facing storefronts. Barbies are mainstream children's toys. But an inspiring, interactive, aesthetic ode to an individual's true, whole, inner self, the animating force of relatedness, the feminine complementary to the masculine ignites intolerance simply because it's a female form?”

O. requested a community outreach event at the library to discuss patron concerns directly with the public, something the library said was not in their purview since the City of Shoreline, not the King County Library System, manages Pop-Up Pianos.

Francis brokered a compromise, purchasing a blank tank top from Ross Dress for Less to cover the torso. O. / Typonexus
“I had hoped that the artist might explore a box of shirts and additional signage to encourage patrons to actively clothe the mannequin—thus interacting visually with the object in addition to playing music—but that has not happened yet,” Francis said, citing as inspiration Fremont’s Waiting for the Interurban sculpture, which is frequently adorned with fanciful attire.

O. said she would have preferred a more overt message covering the mannequin, like “Censored by Library.”

“Dressing the issue doesn't address it,” she said. “The still attached Dress for Less discount merch tag prices the glaring root problem at $7.99.”

O. claims that the piano has been further vandalized—the mannequin leg in place of a traditional piano leg has been knocked out—and strewn with religious pamphlets from Unity church in Lynwood, though The Stranger has not visited the Shoreline library to confirm these latest developments.

O. / Typonexus
The brouhaha has left Francis and other library staff puzzled. “Perhaps because the mannequin is also headless and armless, it might implicitly convey the objectification of women’s bodies that the current political climate magnifies and heightens, but I am speculating,” he said. “[Library staff] were as surprised as me that the public reacted this way, and were in support of art as a source of ideas rather than perceived aesthetic beauty.”

To his credit, Francis is taking the controversy in stride as a valuable lesson in the provocative potential of art.

“The whole project is evolving now and in flux, which I find compelling and interesting in ways I had not anticipated,” he said. “Her inclination to add the words, ‘censored by the library’ made me cautious; my advice if that were to happen would be to simply ask ‘censorship?,’ with a question mark: even though the answer is pretty obvious, it creates a question so that individual viewers can think and decide for themselves.”

Comments 3
Tags: Visual Art ??!! Fashion
The Stranger depends on your continuing support to provide articles like this one. In return, we pledge our ongoing commitment to truthful, progressive journalism and serving our community. So if you’re able, please consider a small recurring contribution. Thank you—you are appreciated!
CONTRIBUTE NOW