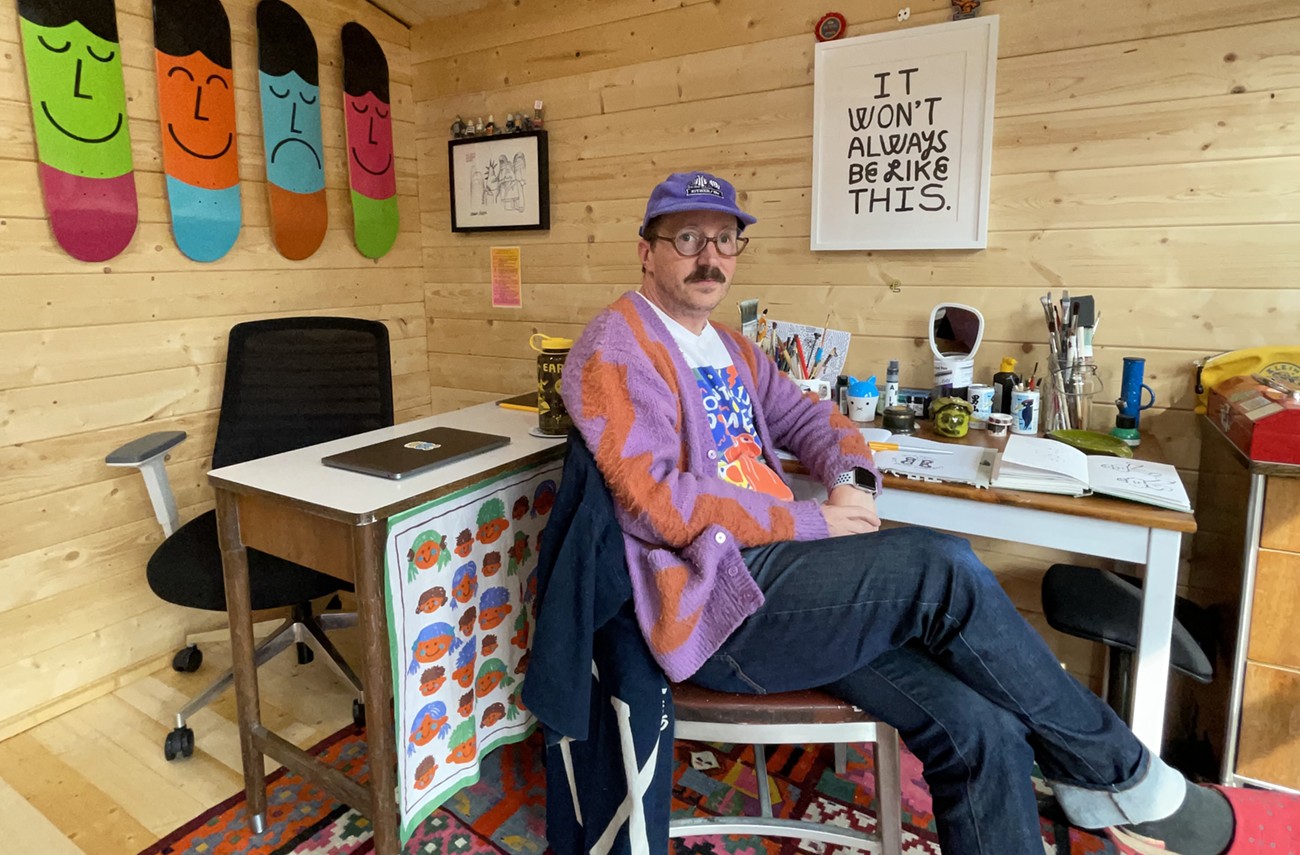 Just wants to have fun. courtesy of the artist

Jason Sturgill is an illustrator, designer, consultant, and artist based in Portland. He’s tackled a wide spectrum of creative endeavors including starting a record label and his own online art gallery as well as doing packaging design for Dark Horse Comics, marketing and product design at Nike SB, and interactive and strategy at Wieden+Kennedy. He also gives talks at schools and corporations, and previously taught at Portland State University. In our interview, we talk about creativity, originality, and the bravery to speak up about your struggles.

Can you tell me a bit about your beginnings, and how skateboard and album graphics inspired you as a PNW youth?

I grew up in Longview, WA which was a really small conservative lumber mill town in the pre-internet days. I sometimes equate it with the town in the movie Rad, which was one of my childhood favorites. So in terms of exposure to arts and culture, I really only had Thrasher Magazine and luckily a tiny alternative record store that gave me a small window into the outside world with more exciting possibilities.

Your work has always been clever and charming, but in the last decade you’ve begun to share more of your struggle with bipolar, and your work has developed into something tremendously meaningful. Can you share a bit about your journey to becoming an advocate for mental health?

Yeah, it was something I was definitely hesitant to talk about at first. I had concerns about how that would be perceived publicly—would I get less work for admitting I struggle with mental health issues? Would people look at me differently? Once I made the decision to share my story, though, it felt like a giant weight was lifted and I was able to use my art to process what I was going through and in turn, people seemed to really connect with it. It’s also been a great opportunity to help people learn more about the disorder and not feel afraid to tell their story.

You’ve lectured on the subject of creative originality and quoted David Bowie’s line, “I wasn’t original, just a tasteful thief.” What do you think is the ideal formula for doing respectably "new" work?

I truly believe that there is no such thing as original work, it doesn’t exist. You can’t create anything in a vacuum without any sort of spark of inspiration from something else. And that thing that sparked your inspiration is likely to spark someone else’s inspiration and that’s how similar work comes about. I think the only way you can really make something “new” is by injecting your personal story into the work, which then creates a unique stamp that is on a molecular level going to be different than others. There is visual theft, though, which I do think is wrong and it, unfortunately, happens a lot in the creative space. I think by following Bowie and taking from multiple sources is where it gets interesting.

How do you see AI influencing the art world, for better or worse?

This is such a hot-button topic right now and I’m in the camp of “it’s going to happen whether we like it or not” so we might as well find a way to work with it. I’ve seen people like Erik Winkowski, who’s utilizing it in a thoughtful and super creative way.

You began illustrating later in your life and career, and I’m always advocating that it’s never too late to try something new. Were you worried about drawing without any training, and how did you push through it?

I really owe it all to my old studio mates, Kate Bingaman-Burt and Will Bryant. They are both self-taught and it gave me the push I needed to try it and see what I could do. I’d always been a big fan of illustration, it just seemed like it was something you had to have a natural talent for. The funny thing is I also really love art brut/Naive art and it really just comes down to not overthinking things and just trying to have fun with it. At the beginning I gave myself assignments, my first one was when I was coming out of grad school and really depressed. I started my “Face Each Day” project, where I would draw a face each day and post it to Instagram.

What role does music play in your current work and what are you listening to in the new studio space?

That’s funny you ask because I’ve been thinking lately how I want to make some art in response to things I’m listening to. Today I’ve been listening to the latest from 49th & Main on repeat. TM by Brockhampton, Steve Lacy, Remi Wolf, Clairo, Jean Dawson, and Frank Ocean always comes back on.

When we last spoke you said, “I’m not here for a long time, I’m here for a good time.” Which cracked me up and also I think is the perfect antidote to the obstacles we all create for ourselves.

Yeah, I think it’s really easy to be serious when you get to be an adult and it becomes harder to have fun. Which is counterintuitive, I’m constantly trying to channel my inner child. Kids just wanna have fun.

Comments 1
Tags: Visual Art
The Stranger depends on your continuing support to provide articles like this one. In return, we pledge our ongoing commitment to truthful, progressive journalism and serving our community. So if you’re able, please consider a small recurring contribution. Thank you—you are appreciated!
CONTRIBUTE NOW