It Was Laser Zeppelin, and I Got So Stoned, I Ended Up Crawling Around on My Hands and Knees and Almost Peed in the Pacific Science Center Fountain 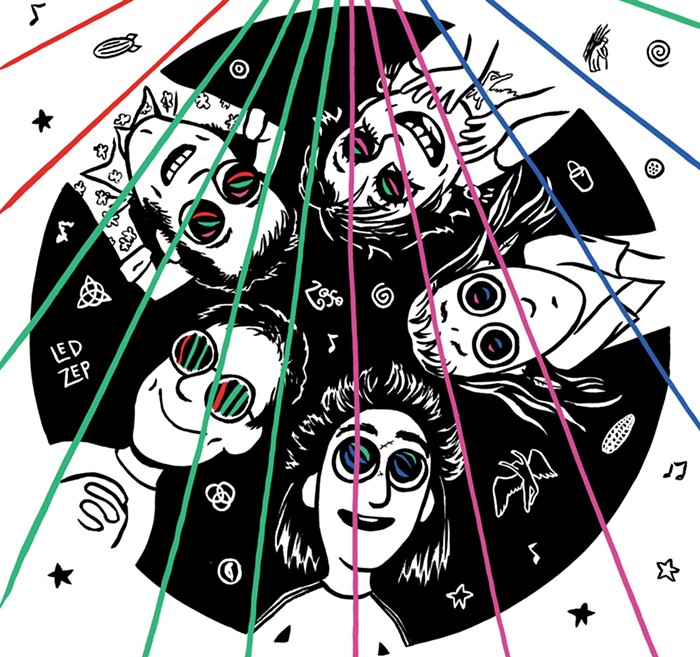 I'm probably not alone when I say the most stoned I've ever been in my entire life was because of an edible. I mean, more than a decade ago, when your semiprofessional stoner friend made weed butter at home, it seemed impossible to know how many milligrams of THC was ever really in the mix.

Of course, any friend should (and in my case, absolutely did) tell you to be careful—to start out eating only a small amount. But you know what? No one is the boss of me!!! NOT EVEN ME! Especially not 15 years ago, when I was young. Nope, I'm still the one who can't go to a buffet without dirtying five plates—still the overzealous ding-dong who buys a MEDIUM-size movie theater popcorn even though it's 12 stupid dollars and has more saturated fat than any human should eat in three days. But I'm passionate. And by passionate, I mean impulsive.

I was definitely feeling impulsive on a sunny afternoon back in 2001 when my neighbor, artist Ellen Forney, proposed a group outing to Pacific Science Center. Ellen, who had just finished a graphic novel called Monkey Food, was about to embark on writing a brand-new book called simply I Love Led Zeppelin. And love Zeppelin she did—Ellen even got a small "LED ZEP" tattoo on one of her teeth (who tattoos a tooth?!). Her love for Zep was paramount, and it made perfect sense for a gaggle of us grown-ass adults to eat pot brownies, jump the number 8 bus, and go down to Seattle Center to see Laser Led Zeppelin. I'd never seen a proper laser show. I'd also never eaten a pot brownie.

"Just eat a quarter of it," said my semiprofessional stoner friend. I did, but then when I tried to pass the rest of the messy, chocolaty treat to anyone else, they'd already eaten plenty. Without thinking twice, I porky- pigged the rest of the brownie right into my own mouth. OH, THIS WAS GONNA BE FU-UH-UNNNN! And I would surely have the MOST fun, since I ate ALL the brownie! Or so I thought.

The brownie started kicking my ass on the bus. One of the people in our party was wearing a cheap black wig that he thought made him look like Nikki Sixx from Mötley Crüe. I decided he was more Joyce DeWitt—you know, Janet from the TV show Three's Company. I started addressing him as Joyce, which to me was hellishly funny. I couldn't stop giggling. No one else on the bus even smiled when I repeatedly said, "Hey, JOYYYY-CE!" but then again, no one else ate an ENTIRE homemade pot brownie either.

Laser shows at the Pacific Science Center (which cost less than a medium movie popcorn) are, plain and simple, AWESOME. I'm just going to own my "dork" and admit this. The Laser Dome's website claims, "At 80 feet in diameter, it's the largest and longest operating domed laser theater in the world." IN THE WHOLE WORLD! It's completely mind-altering weirdness, that room, no matter what music they play, no matter what visuals they project on the ceiling. You can sit in a chair that leans way back, or you can just sprawl out on the floor in front of the chairs. When we made the trip down in 2001 for Led Zeppelin, Ellen, Joyce, I, and the others laid ourselves flat out on the floor and ooh-and-aah'ed at the "world-class laser art" on the ceiling for what seemed like two lifetimes—two long, luxurious and sexy utopian eternities. THEN IT HAPPENED.

"You're gonna have to feel your way outta here," she/he said. The room was pitch-black, to make it easier to see the laser drawings on the ceiling.

"Holy fuck," I whispered to myself. I held out a hand in front of my face. I could not see it! On top of the psychoactive effects of the brownie, I was blind.

I tried to mummy-walk, arms outstretched, gingerly baby-stepping toward what seemed like it might be the edge of this strange new world. "Ouch! Watch it!" cried a stranger. Walking just would not do. I got down and crawled on my hands and knees. Hands did less damage than feet, and I crawled around, bumping into people and really trying not to let my mind be poisoned by visions of lifting my leg, like a dog, in some corner of the room.

I wasn't a dog, of course, I was a LADY. A very stoned HUMAN LADY. When I finally crawled headfirst into the thick, velvety blackout curtains, a single tear rolled down my face. Or maybe it was pee trying anything to escape my body. I pulled myself up into a standing position, using the glorious curtains. "Oh, the end of thy bladder's nightmare is nigh!" I shouted inside my head in a triumphant and dramatic Shakespearean accent. But it wasn't the end of my nightmare. Instead, this was the moment I would experience the perfect circular shape of the Laser Dome. I walked around the edge of the circle for what must have been three or four complete 360-degree laps. WHERE WAS THE BREAK IN THE CURTAINS?! I was trapped! And time, oh time, was running out.

When I finally found the split in the fabric, I launched my whole body through it, like a cosmic portal into the old world in which I had once lived—a world of light, sight, and toilets.

But I thrust myself out the worst possible exit door. Immediately the bright sunlight reminded me of how dark it had been where I just was, and also of how wickedly stoned I was. I covered my eyes, howled, and started to drop back down to my hands and knees. THEN I HEARD IT. Wait, what... a fountain?! Oh, nooooooooo! NOT A FOUNTAIN! The sound of the running, splashing water called out directly to another set of ears located somewhere deep inside my bladder. Could I, by sheer will with a stoned brain, really keep the floodgates closed? These gates protecting the world (and my pants) from a most heinous pee-tsunami? Had I done enough Kegel exercises to endure this Olympic-athlete-scale challenge? I stood for several minutes, with "praying hands" jammed into my crotch, and begged the sky—pleaded to whatever god or goddesses that just might live up there for forgiveness. "I'm sorry I ate ALL the brownie, just please don't make me pee my pants!"

I repeated this 10 times fast and, like a miracle, I looked up again and a puffy white cloud slowly formed into a giant hand, with a finger pointing toward a Seattle Center restroom. I carefully walked, with praying hands still holding back the floodwaters, to my salvation. In the restroom, I promised myself I would try to be a better person if I survived. I hope that I sort of am. I still get a little tingle in my wee parts when I hear Led Zeppelin, though.

We Asked 12 People at Hempfest: How High Are You?

A Beginner's Guide to Ingesting Marijuana

(Dedicated with Love to Maureen Dowd)