What Is Dabbing? And Should You Do It?

The First Time I Tried It, I Couldn't Believe How High I Got 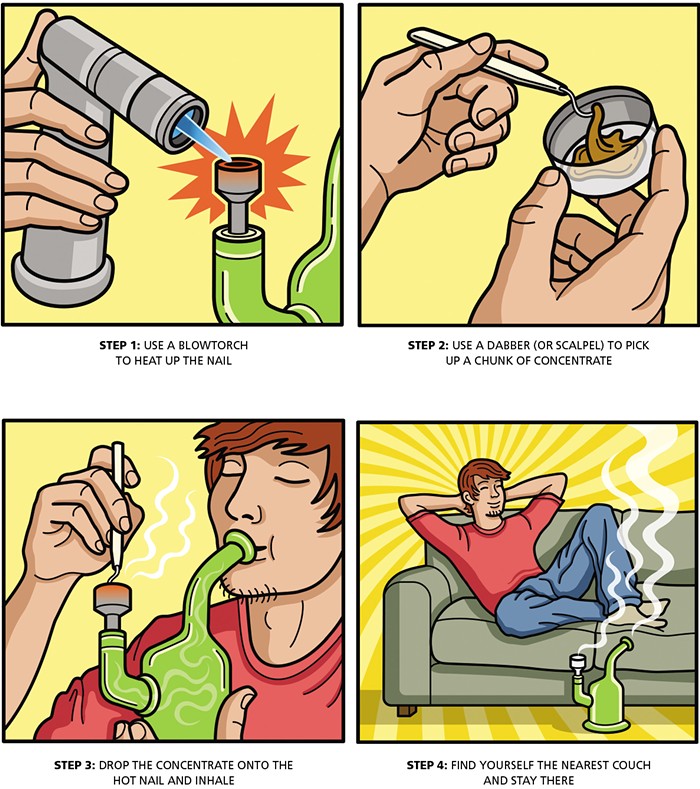 I have never seen someone smoke crack, but the first time I saw someone smoking a dab, I definitely thought that's what they were doing. The process involved a blowtorch, a metal piece, and some kind of waxy substance. The smoker took a huge hit and was immediately knocked into the kind of stuttering high usually reserved for drugs more illicit than pot.

After being assured it was really just cannabis, I decided to try it. My friend put the bong in front of me, lit his blowtorch, and started heating up the metal piece that had replaced the bong's normal glass bowl. Once it got red hot, he turned the torch off, let the metal cool for a bit, and then told me to inhale as he used a scalpel to put a small drop of honey-colored concentrate onto the metal piece.

The concentrate immediately turned to vapor and, as the bong bubbled away, I inhaled a surprisingly clean hit with an herbal and piney aroma. It tasted like that beautiful smell you inhale when you open a fresh package of weed, a smell that is often compromised during smoking because of the butane in your lighter or the ash from your joint's rolling paper.

And it got me high as fuck.

I really didn't understand what a dab was at the time, but I definitely enjoyed it. That was a couple years ago in Colorado, just after they legalized cannabis. Since then, dabs have gotten only more popular, both in states where it's legal, like Washington and Colorado, and in the parts of the country that haven't come around the corner yet.

Dabs are being demonized as a dangerously powerful drug in those states where cannabis is still illegal, while many smokers in legal states just scoff at dabbing as a sophomoric way to get higher than you need to, akin to shotgunning a beer.

But dabs are actually more interesting than they get credit for.

Most evidence points to them being far healthier than the standard way of smoking weed (but until the DEA reschedules pot, it's very difficult to make definitive health claims about cannabis). The high you get off a dab is quicker and cleaner than conventional smoking methods, and cannabis concentrates (the substance that makes dabbing possible) promise more innovation than any other sector of the legal industry.

To the ho-humming pot smoker from the 1960s claiming weed doesn't need innovation, well, those foot-long joints of Cheech & Chong are all the evidence necessary that your weed needed improvement. Thanks to modern strains that are 30 times more powerful than 1960s weed, and modern concentrates that can be 90 times more powerful, we no longer need to inhale a quarter of an ounce of burning plant material to get really high. That is a good thing.

Walk into any of Washington's recreational weed stores, and you'll see a few display cases dedicated to products that look like a mix between honey, hard candy, and hash. This is the world of concentrates, which is attracting people of all ages, according to Sarah Bukantz, the store manager for Uncle Ike's in White Center.

"More experienced smokers who reach a higher tolerance see that smoking flower doesn't get them as high," Bukantz said. "They are looking for ways to smoke less and get higher."

So what do you need to dab?

The traditional dab rig setup includes a water pipe with a metal piece, called a nail, replacing the normal glass bowl. The metal allows the nail to go over 500 degrees Fahrenheit without cracking. You'll also need a metal utensil to collect your concentrate and put it on that heated nail. The traditional setup requires a blowtorch to heat up the nail, but there are two ways to get around having an open flame in your living room.

First, you can buy an electronic nail, which plugs into your wall and heats itself to a specified temperature. These can be pricey, starting around $100 and getting more expensive if you want more control over the temperature. Dustin Choi, an extract specialist at Suncliff in Sodo, said regular dabbers should look into electronic nails.

"E-nail kits are a good investment. I have one at home, and you can really dial it down," Choi said. "You can do a low-temp dab on the e-nail so you're not burning your throat."

The other option is to buy a dab pen. They are similar to e-cigarettes or vape pens but have been modified to take single hits of solid concentrates. Dab pens will run you $60 to $80 and will replicate most aspects of the traditional dab rig while also being portable and far more discreet.

So now that you have your dab setup, what are you going to put into it? That's where things get a little bit more complicated.


The Future of Cannabis

Circanna, a cannabis processor in one of the many unassuming warehouses in Sodo, feels like a mix between a craft brewery and the research department of a pharmaceutical company. A friendly pit bull mutt wanders around the front half of the building, where young office workers type away at desks. Behind a keypad-locked door sits Circanna's lab, where technicians in blue jeans and lab coats quietly work next to humming stainless-steel lab equipment.

Andrew Sorkin, the owner of Circanna, gave me a tour of the facility and tried to convince me to stop asking questions about THC.

"THC is the least interesting part of the plant, and it contributes the least to your experience being unique," Sorkin said. "The difference between an exhilarating and uplifting experience or a sedating and relaxing experience is the stuff besides the THC."

Sorkin was speaking about the hundreds of other active chemicals in cannabis, including cannabinoids and terpenes. Cannabinoids, like THC, interact with receptors in our brains that can give them psychoactive properties. Terpenes are aromatic compounds created by all plants, and the ones in cannabis are thought to have a profound effect on how our brain's cannabinoid receptors process THC.

Growers have been breeding cannabis to increase specific cannabinoids and terpenes for decades. Think of the high-CBD medical strains that won't really get you high, or strains like Lemon Skunk, a heavy sativa bud that has such high limonene terpene content that it could easily be mistaken for smelling like fresh lemon zest. But it's the world of concentrates that offers a future of manipulating what cannabinoids and terpenes we consume.

Labs like Sorkin's—there are 75 across the state, according to 502 Data—use machines that cost hundreds of thousands of dollars to extract and then refine all of those active chemicals, allowing them to separate specific compounds and make new ratios and combinations to create certain types of recreational highs or specific medical uses. The techniques behind these concentrates are still in the early stages—extraction specialists have been able to work legally for only the last two years—but the concentrate market is already being differentiated based on quality. Unfortunately, there's little standardization of names or labels in the concentrate industry, making it harder for newer consumers to know which concentrates are better.

Go dab shopping and you'll hear words like honeycomb, shatter, pull 'n' snap, Rick Simpson Oil, butane oil, CO2 wax, water hash, live resin, rosin, the clear, and hash oil, to name a few. An experienced budtender will be able to walk you through what is going on with each concentrate, but not all budtenders know the products they're selling.

Concentrates, by definition, are heavily processed goods, so you should be shopping with as much knowledge as possible. Ask your budtender these basic questions to navigate through their selection. If they can't answer them confidently, don't buy their products.

"What strain was used for this concentrate?"

The only way to produce a top-shelf concentrate is to start with good weed. It doesn't need to be a picturesque nug—it's all going to be ground up and shot into a pressurized machine—but the starting bud will determine a lot of the final product.

"What solvent was used on this concentrate?"

Almost all concentrates use some kind of solvent to separate the cannabinoids and terpenes from the rest of the bud's plant material. The classic example is butter—heat crushed up cannabis in butter, strain out the plant material, and you have THC-laced butter ready to be baked or spread on anything. Butter is effective for the home concentrate maker, but the chemists working on modern concentrates opt for more efficient solvents like butane, propane, ethyl alcohol, or carbon dioxide.

Rosin is one of the solvent-free concentrates available on the market. It is made by heating and squeezing the resinous sap out of flower buds (often with a hair straightener on the black market). This solvent-free process eliminates any need for more refining (see below). Don't confuse rosin with "live resin" or "loud resin," which do use solvents (see about that naming thing?).

"Was this concentrate refined or distilled?"

Extraction is usually the first of multiple steps when creating concentrates. If a petroleum-based solvent was used, like butane or propane, the lab will need to further refine that solvent out of the concentrate. Further refining or distilling of the concentrate will also increase its strength and certain flavor profiles.

"When you look at the difference between your bottom shelf and your single barrel whiskey alcohol, it's the preparation that went into it. So when you're looking at your distilled concentrates, they're taking more time for the experience of the smoothness of your concentrate smoke," said David Desroches, a manager at Vela Cannabis in Sodo.


Don’t Get Too High

There's some irony in dabbing—it's a clinical way to administer massive amounts of THC extremely quickly, but most of the people who dab regularly do so moderately. It's common to see people taking small dabs, say .05 gram or about the size of a cannabis seed. If you're using a 70 percent THC concentrate, you're getting 35 milligrams of THC per .05 gram hit, or about three average dose edible candies. Frequent dabbers will likely take multiple dabs of this size, so they could ultimately be ingesting more than 100 milligrams of THC.

If you are trying dabs for the first time, you should certainly use restraint. A smaller dab will let you enjoy the smoothness and flavors without getting too high. "A lot of dabs that people get the first time are too big, so start small," Sorkin said.

But once you have a feel for dabs, I'd recommend finding a time when you have absolutely nothing you need to do and nowhere to go. Sit down on the couch and rip a good-size dab of top-shelf concentrate—and you'll be as high as you've ever been.

Getting High with the Queen Kisser