Tips to Take the Edge Off When You’re Too High

“Don’t Be Concerned. It Will Not Harm You.” 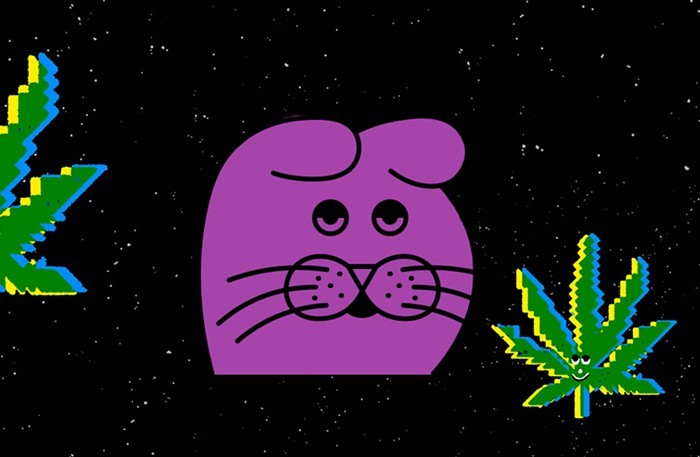 One beautiful Saturday, I was lying on the couch in my living room playing guitar solos. I’d just eaten a piece of weed brownie the size of my thumbnail and my evening plans included nothing but guitar skronk noises and maybe ordering Thai at some point. Then my phone rang and holy shit my best friend was back in town! She’d been traveling for months so I got on my bike and rode over to her house where she immediately started telling me she was breaking up with her long-term boyfriend so she could date a travelling circus guy. It was at that point, sitting on the floor of her room, I remembered the brownie. Oh no, the brownie, I thought. I was really fucking high.

My friend stalked her room, listing the reasons her current relationship wasn’t working, and I pulled a heavy art book off her bookshelf. I began turning its massive, colorful pages—hoping that somehow the art would calm me. I do not remember anything concrete about the book. I only remember an unreasonable terror that I was about to ruin an important friendship because I was so thoughtlessly stoned.

I bet the whole internal ordeal that felt so epic to me lasted 10 minutes, tops. I looked up, interrupting her. “Hey, I have to confess something,” I said. “I ate a weed brownie before I came over—before I knew you were back in town—and I haven’t understood anything you’ve said since I got here.”

I like to use cannabis responsibly, but I have, as evidenced by this anecdote, misjudged my tolerance from time to time. Although the heart-racing panic of feeling way too stoned never seems to lessen with frequency, I have developed some approaches for calming down or managing my high when things have gone, as the professionals say, all higgledy-piggledy.

Going Outside / Taking a Walk

I know, the cops are outside. But it’s completely legal to be high in your own backyard, and you’re not gonna to be in too much trouble just walking around your own neighborhood. The fresh air and the gentle sound of leaves moving in the wind are a holistic soft-pedal to a buzz gone bad.

Although I would never suggest going to yoga class high, I have been known to get really deep into a stretch as a way to stop worried, too-high thoughts. Paying attention to your body and controlling its responses uses similar methods as one might study in cognitive-behavior therapy. Controlling your breath focuses the mind away from unhelpful thoughts and can stop the cycle of compounding fear and the body’s reaction to that fear.

Middle-obscure ’60s folk-rock musician Bob Lind has nothing bad to tell you about life. Whether he’s singing, “Don’t be concerned/It will not harm you” on his most famous single, “Elusive Butterfly,” or actually naming the album it’s from Don’t Be Concerned (because Bob Lind sticks to what Bob Lind knows best), we can all agree that the gentle songs of Bob Lind won’t introduce anything jarring into your delicate emotional state. Occasional breakdowns into lite psychedelic acoustic guitar never stray into anything more intense than hypnotic drumming. Bob Lind wants you to have the tamest trip imaginable.

I heard about grapefruit juice from a friend who was working in the Netherlands and was suddenly attending brainstorm meetings in hash cafés, as opposed to coffee shops or bars. The first few times, he got way too high and called upon his Dutch peers for advice. They ordered him a glass of grapefruit juice. More research into this mixed-up citrus reveals that grapefruit can have a serious impact on the effectiveness of a variety of drugs—serious drugs like Methodone, Viagra, or Oxycodone. For some drugs, grapefruit juice increases the drug’s entry to your blood, and for some it blocks the absorption. Who would have expected grapefruit juice to be nature’s wild card? In my experience, grapefruit juice smooths me out—seeming to block my body’s absorption of THC—but there haven’t been any citable studies on the subject and I’m not a doctor, so maybe quiz your weed nurse on this.

That Saturday, my friend and I utilized a little from my first and fourth listed tips. We walked to a nearby barbecue place where I drank all the juice and then ranted about ’80s X-Men comics for what felt like hours.

“I think those guys are in love with you now,” my friend laughed, as we left.

“What guys?” I asked. I was beginning to finally come down.