Sex and weed do mix. 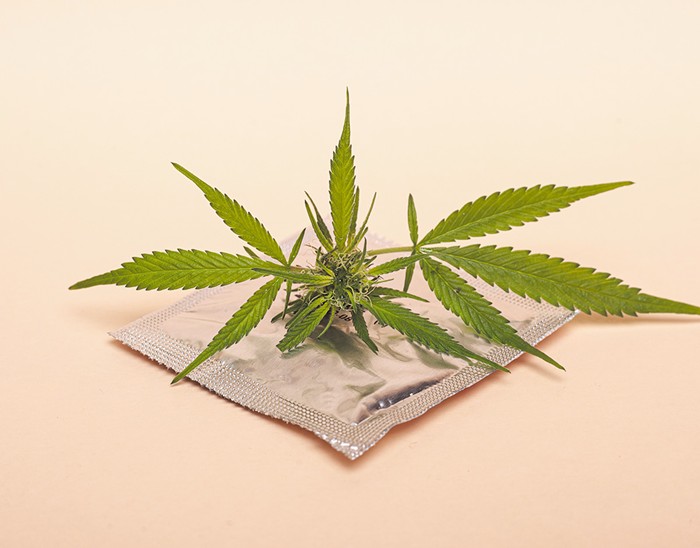 This Valentine's Day, couples (or thruples or quads) around the country will be plying themselves with alcohol, which, for better or worse, is an essential ingredient in any number of sexual or romantic encounters.

Alcohol, obviously, lowers inhibitions and makes things that might not be possible sober seem not just doable but actually a good idea. (For instance, putting candlesticks up your butt.) The downsides to drinking, however, are obvious—for instance, an increased likelihood of assault, not to mention a godawful hangover—and yet, humans like to get fucked up before we fuck. It's a thing.

According to a new study, science has verified something that many stoners have known for ages: It's not just booze that increases sexual activity and pleasure; weed does it, too.

In a new paper entitled "Sex, Marijuana and Baby Booms," researchers from Georgia State University and the University of Connecticut analyzed how sexual behavior changes in states that introduced medical cannabis. The study, which was published in the Journal of Health Economics, found that not only does the amount of sex people have increase in those states, so do birth rates and gonorrhea. So while the upside of ending prohibition of cannabis is that people are having more sex (yay!), the downside is that they're not always using protection (which is fine until you find yourself unexpectedly pregnant and with itchy junk).

So, why might more weed lead to more sex—and more risky sexual behavior? The theory is, weed, like booze, lowers one's inhibitions and makes us more able to indulge in behaviors that otherwise might cause us anxiety or shame.

"Anything that might inhibit the inhibition could increase sexual desire—even if it 'taketh away the performance,' as the Porter in Macbeth notes," says sexologist James Pfaus, a former professor at Concordia University who was not involved in the study. "Liberalized marijuana laws clearly lead to more use, and the effects from an epidemiological standpoint show clear increases in disinhibited (and 'risky') sexual responses. It is not a huge effect, but it is significant."

For some people, especially women, there may be other effects going on, too. According to Pfaus, there's a growing body of evidence suggesting that some compounds, including THC and possibly CBD, can increase vaginal and clitoral blood flow, which then signals to the brain that the body is down to fuck.

"There may well be some women who smoke up before sex because it makes everything easier and perhaps better," Pfaus says, "but it also may affect the quality of orgasm, making it easier, with good sympathetic blood flow, to have one, and easier in the brain to suspend disbelief and let yourself go."

This is echoed by clinical psychologist and sex therapist David Ley. "Wish fulfillment comes in all flavors," Ley says. "Separating out sexual effects of cannabis from the effects of anxiety, placebo effect, and intentionality are likely impossible at this point." But, he adds, "Humans have used substances, predominantly alcohol, for many, many years, to soothe their anxiety and guilt enough to be able to enjoy sex the way they want to. I see no reason cannabis would be different."

So this Valentine's Day, remember, the best lube is lube. But the second-best just might be a little bit of weed. Not so much that you end up locked on your couch with your head in a bag of Doritos, but just enough to put your inhibitions to rest. And the best part is, you won't wake up with a post- Valentine's Day champagne hangover.

Making Pot Butter Without the Smell

In preparation for the second-biggest weed holiday after 4/20, I tried out an MB2e MagicalButter Machine.

How to Clean Your Nasty-Ass Bong

Or pipe. Or bubbler.

Pot and Pregnancy: What Do We Know?

The science is very limited.