25 Years of The Stranger: Table of Contents

Everything in our Anniversary Issue 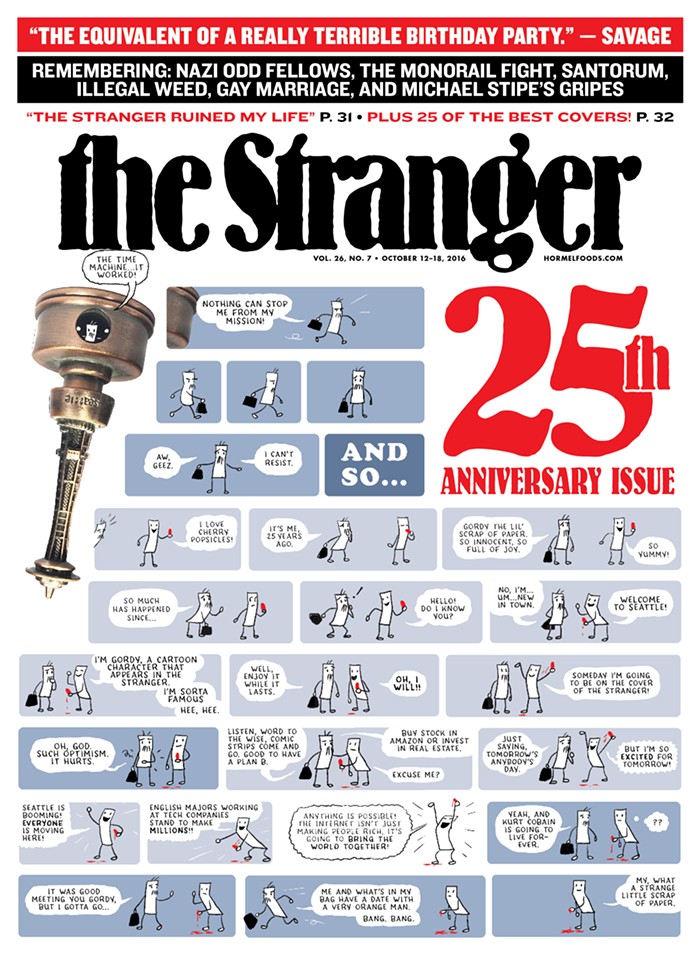 An oral history of the first year of The Stranger, by Amber Cortes

Excerpts, essays, covers, and features from the first seven years

Are You Gay? by Eric Fredericksen

The canned ham dropped from the 23rd floor of the Washington Mutual Building of newspapers: excerpted articles

Where are they now: Former Stranger staffers reminisce about confronting neo-Nazis, death threats, and the time before the internet, by Rich Smith

The Stranger ruined my life, by Brad Steinbacher

Pretty on the outside: Stranger covers through the years

Excerpts, essays, covers, and features from the difficult second period.

What it was like to work at The Stranger during the early 21st century, by Sean Nelson

How writing for The Stranger made me blacker, by Charles Mudede

I was Stranger music editor for three minutes 18 years ago and Seattle music still sucks, by Everett True

25 Years of Savage Love: How Savage Love changed the way we talk and think about sex, by Debby Herbenick

The biggest mistakes The Stranger has made in our 25-year history, by Christopher Frizzelle

Excerpts, essays, covers, and features from the Imperial Phase

That time we won a Pulitzer, by Christopher Frizzelle

The Third Wave: an excerpt collection

The Pulitzer Prize–winning story "The Bravest Woman in Seattle" in full, by Eli Sanders

For 25 years, The Stranger has spoken the sexy, unruly visual language of art itself, by Jen Graves

In 25 years, The Stranger has made a few enemies. Here's how we did it, by Heidi Groover

Min Liao on Shanghai Garden and the tyranny of Dr. Atkins, originally published on April 3, 2003

Angela Garbes on the time her family ordered a whole fried catfish, originally published on March 30, 2016

A. Birch Steen, Stranger Ombudsman and OSHA Board of Governors Member

A tribute to five people who helped shape The Stranger

20 questions with Mike Nipper, The Stranger's receptionist since 1994

Keeping secrets: Matthew Stadler on NAMBLA,the idealization of children, and the contradictions of gay politics, originally published on March 20, 1997

Tags: 25 Years of the Stranger
The Stranger depends on your continuing support to provide articles like this one. In return, we pledge our ongoing commitment to truthful, progressive journalism and serving our community. So if you’re able, please consider a small recurring contribution. Thank you—you are appreciated!
CONTRIBUTE NOW