From GGG to Santorum: Excerpts from Some of the Most Memorable Savage Love Columns 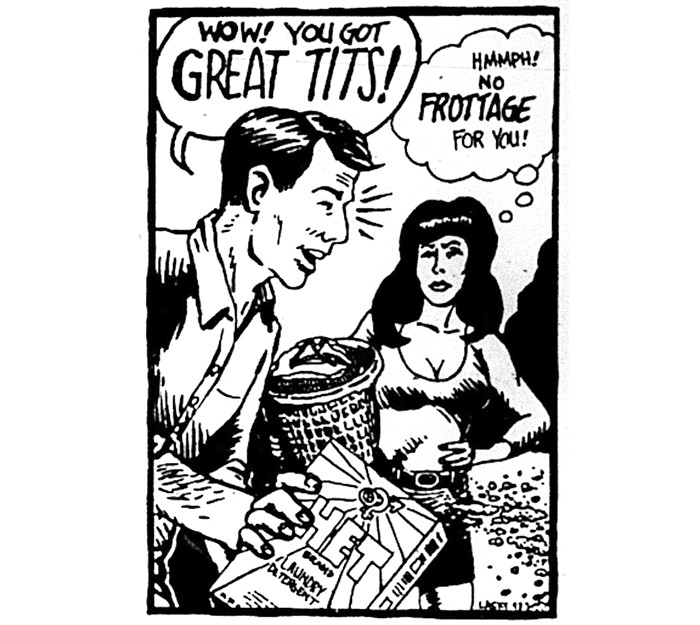 What the hell is frottage and where can I get some? If you don't answer my question, I'll stay awake nights watching info-mercials.

There's no such thing as "frottage." It's a word I made up. I wanted to see how many letters I would get asking me what "frottage" was after I introduced it in my column. Originally, I was going to make up a definition—something like "Frottage is the act of making charcoal rubbings of your lover's genitals"—but my conscience got the best of me and I'm coming clean; there's no such thing as "frottage."

[Ed. Note: Dan has often been known to lie to stupid people in his column.]

Ann Landers writes an advice column that appears in daily papers across the country. Since I know my readers are way too hip to waste their advice-seeking time on ol' Ann, you might have missed her column last Sunday:

"Many straight people believe homosexuality is a curse and that gays are mis­erable. Some homosexuals may agree with them. I, however, have heard from gays who consider homosexuality a 'special bonus.' So let's settle that question once and for all. I'd like to ask the gay community how it feels about this."

Ann is a fellow advice monger, and out of professional courtesy, I've decided to help her out. Clip the coupon at the bottom of this week's column. If you're queer, check the "I'm glad I'm queer. I wouldn't be straight if you paid me" box. If you're not queer, poor thing, check the "I'm not queer, but I wish I were" box. Then put the coupon in an envelope and send it off to Ann. Do it right now.

It feels like a million years ago that Senator Rick Santorum (R-Pennsylvania) told a reporter that he hoped the United States Supreme Court would uphold anti-gay sodomy laws and compared consensual gay sex to incest, bigamy, adultery, and "man-on-dog" sex. There was a mini uproar, of course, with gay groups calling for Santorum's head and anti-gay groups defending Santorum. For his part, George W. Bush called Santorum "an inclusive man"—and for once Bush was right.

Alas, the Santorum scandal didn't have legs. In fact, most of us—myself included—had already moved on when a Savage Love reader wrote in to say that he didn't want to see the Santorum scandal fade into political oblivion. SARS (Sex and Rick Santorum) suggested that we name a sex act for Santorum, "[so that] this episode will never be forgotten."

But now that the votes are all counted and a winner has been declared and the cheering has stopped, I see a problem. While everyone who has anal sex has to confront a little santorum now and again, no one likes to think about santorum, much less discuss it. A polite buttfucker says nothing about santorum to the embarrassed buttfuckee, and vice versa. They just get up and clean up. Since people don't discuss santorum even with people they've covered with santorum, getting the word into general use is going to be tricky. I'm willing to do my part, however: Please send me your santorum-related questions and/or santorum-related memories and I'll do a column or two on santorum. This will not only help to get the word out and into general use, but also help break the silence about santorum."

After all, this is serious business: What term, from this day forward, will be the commonly accepted slang for a woman fucking a man in the ass with a strap-on dildo? Three candidates stood in this election: bob, for Bend Over Boyfriend, a popular series of "how to fuck your man in the ass" videos; punt, for kicking the ball to the other team; and peg, for a device once used to, uh, keep the butts of some very unlucky boys gaping open. Thousands of people took the time to cast ballots (12,103 to be exact) and many included impassioned pleas for their favored candidate along with their votes.

I'm not running your letter for the small number of pee-lappers out there reading this. I'm running it to give hope to all the young, single people who read letters from unhappy, sexually frustrated married people in my column and then write to ask if there's something about being married that destroys your sex life. No, kids, there isn't. You can be married and enjoy an exciting, mutually pleasurable, wildly adventurous sex life—provided, of course, that you have the good sense (or the good luck) to marry someone who's good, giving, and game, and that you and your partner are both willing to be open and make compromises.

Older folks who mess around with younger folks have a special duty, TT, and it is to leave 'em in better shape than they found 'em. You don't make babies, you don't give 'em diseases, you don't lead 'em to believe that anything lasting is going to come of this. You answer their questions, correct any misconceptions they may have about sex, show them where the clit is, make sure they know that birth control is their job too.

If your McJob isn't in a McSchool—if you're not a teacher or a coach—the law in your state is clear: You can fuck your young coworkers senseless, DOM, so long as the sex is consensual. But remember the first rule of sleeping with legal teenagers: Younger sex partners are like campsites, DOM. You should always leave 'em in better condition than you found 'em. Don't knock 'em up, don't give 'em STDs, and don't mislead 'em about the long-term possibilities (which are nil). Make sure they're having fun, be open and accommodating, and combat their youthful ignorance about sex by answering their questions.

As for my marriage—my monogamish marriage—it's lasted twice as long as Ronald Reagan's first marriage, longer than all but one of Newt Gingrich's three marriages (and soon it will have lasted longer than all three of Newt's marriages), and much, much longer than any one of Rush Limbaugh's four marriages.

More Savage Love from The Stranger’s 25th anniversary Issue: Relive the very first Savage Love column, find out what saddlebacking is in the SL glossary, and read up on how Savage Love has changed the way we talk and think about sex.

Comments 7
Tags: 25 Years of the Stranger
The Stranger depends on your continuing support to provide articles like this one. In return, we pledge our ongoing commitment to truthful, progressive journalism and serving our community. So if you’re able, please consider a small recurring contribution. Thank you—you are appreciated!
CONTRIBUTE NOW