In/Visible: Corin Hewitt: The Desire and Anxiety of Reproduction and Decay 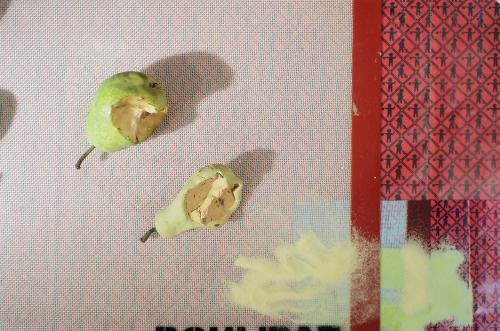 Corin Hewitt does not think of himself as a performance artist in the traditional sense: his performances are always in the service of demonstrating how images are made, and—perhaps sending up the way that performance art finds this end no matter what—they result in an ongoing series of images.

In 2007 at Small A Projects in Portland, Hewitt set up a space for himself that was part-kitchen and part-photo studio. Visitors could watch him from an aperture in the wall. What they saw when they looked in was him cooking up his food at the same time as he was cooking up his photographs using materials he'd brought with him. He did an earlier version of this in Redhook, N.Y., and a later version at the Whitney Museum of American Art, which has a great video and photo archive from the project here. 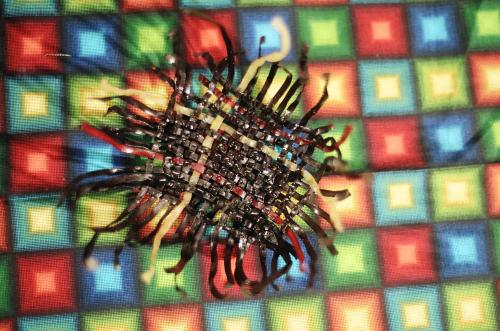 For the Portland project, he brought with him various cooking implements, foods, plasticine, patterned fabrics he'd bought in Portland, and printed-out images of Native American baskets in the collection of the Portland Art Museum. He set to work, sending each of these materials through a process of continuous transformation pictured in (and effected by) photographs taken by four different cameras: a 4-by-5 traditional format camera, a Polaroid, a 35mm, and a digital camera.

He might weave a copy of the museum basket out of multi-colored pasta, set the pasta basket down on a backdrop of vividly patterned (woven) fabric, and take a photograph. That photograph might make its way into another photograph of the artist eating a bowl of the pasta, which might also include, in one corner, a camera not being used but still sort of standing there and watching the moment. 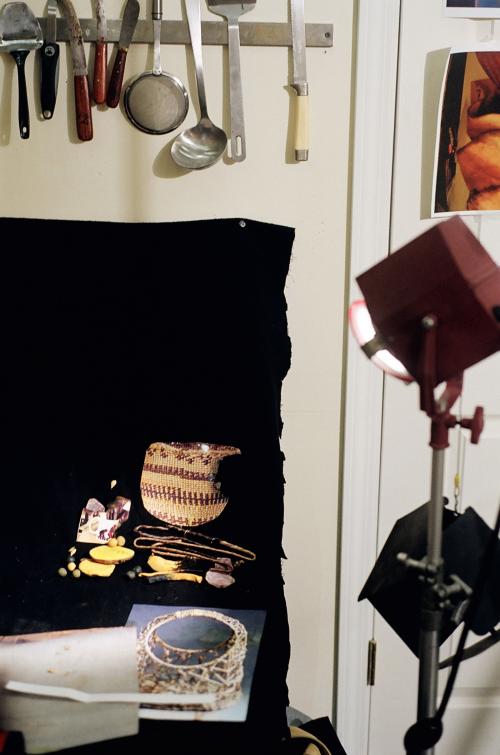 Things that get consumed in Hewitt's performances often reappear in another form. He might take a bite of a pear, sculpt a perfect copy of that bitten pear, and then take a picture of the two together. That picture might appear again in another image, and so might that pear's core appear in a photograph of the installation's compost pile. (Every Hewitt performance includes a compost pile.)

At the Whitney, the outer walls of the built studio-in-the-gallery served as an exhibition space. Hewitt would change out photographs every so often, as he made new ones. There is no such thing as a final photograph in Hewitt's work; something that appears on a gallery wall now may later appear in a photograph sitting in a compost heap. What do we decide to keep and what to let go of? How do we decide what's worth taking a picture of, and what should be left on the periphery?

Hewitt's work playfully and poignantly points to the way that photography transfers matter from one form into another through desire and anxiety about reproduction and decay. 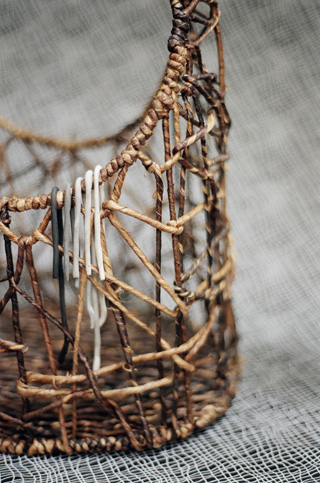 The Portland performance did not have enough space for gallery walls, so the current SAM exhibition is serving as the second half. Titled Weavings, it's an installation of 75 photographs of varying sizes, styles, and techniques (remember, there were four cameras). They're a hodge-podge; there's no linear order to them, which is an invitation to the viewer to form his or her own ideas about what they're looking at and how it got there. And another version of this exhibition—transformation is Hewitt's calling card—exists in a new, hardcover book of the 75 photographs published by J&L Books. In the book, the scale of the varying prints and the sensation of looking into a building through 75 individual windows is lost, but the qualities of each image—this interplay of sculpted and edible pieces of food, that patch of slimy shine on a rotting melon—are heightened.

When Hewitt came to Seattle for the opening of his show, he sat down for this podcast, and turned out to be a master of ungodly eloquence. Our talk ranged from Nan Goldin's Ballad of Sexual Dependency to the death of his father when he was young to a photograph's dual role in providing a model for future behavior and a document of the past. When we began to talk about decay, a fleet of sirens drove by. You'll hear.