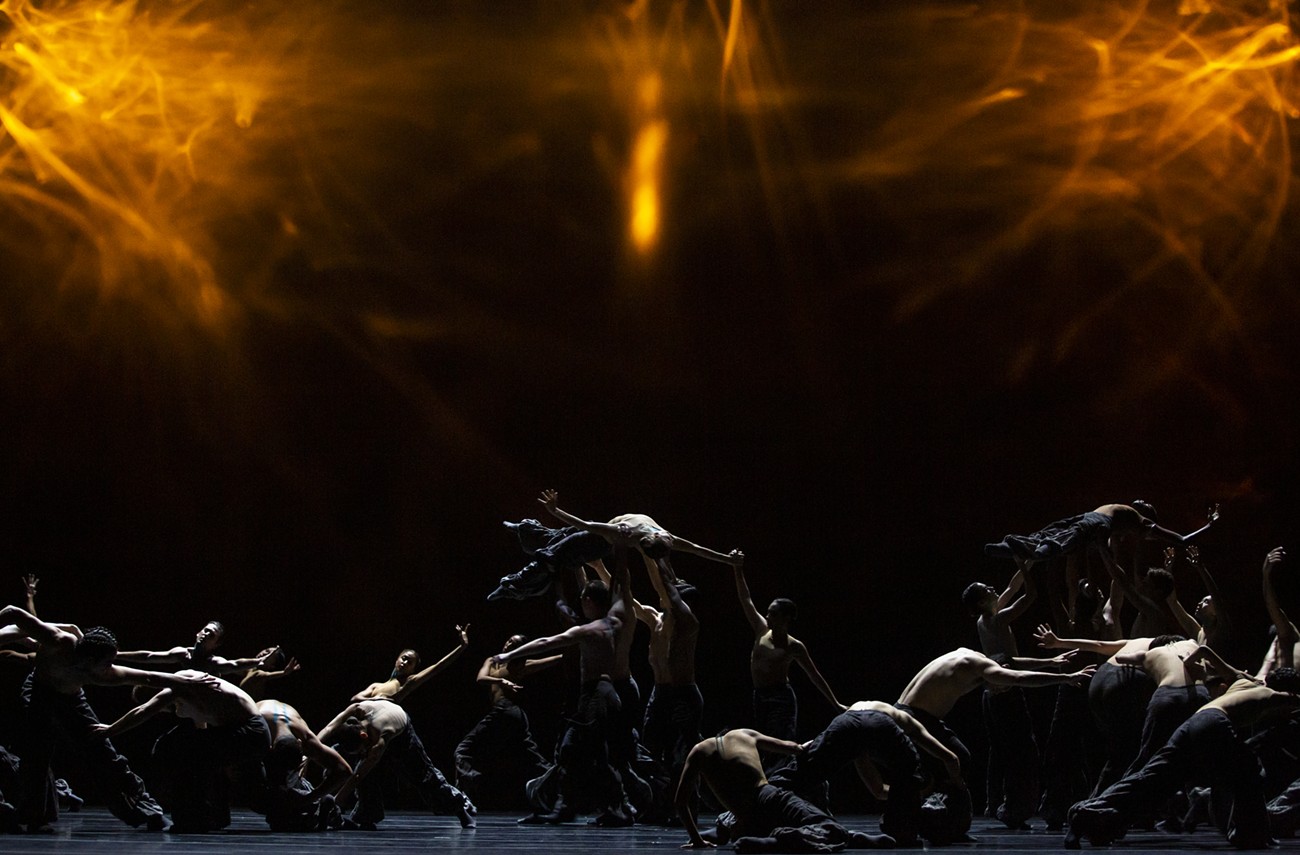 In Crystal Pite's The Seasons' Canon, dancers were water drops in waves and the waves themselves. Angela Sterling

When I walked into my regular post-show bar after seeing Pacific Northwest Ballet's The Seasons' Canon, the bartender took a look at my suit and asked how I liked the ballet. I told her it was one of the three best shows I've seen at McCaw Hall in the last six years. She told me that everyone had been telling her the same thing. Everyone is right.

If you're not doing anything this weekend, then go to the ballet. If you're planning on doing something else, then cancel those plans. Think you're priced out? Then take advantage of PNB's Pay-What-You-Can Thursdays deal. You can score seats for as low as $5. You gotta buy them at the box office 90 minutes before the show. First come, first served.

Now why would you go through all the trouble of braving Mercer Street and buying tickets at an actual box office? To see the North American premiere of the evening's titular performance, Crystal Pite's stunner, The Seasons' Canon.

The show bears some of the hallmarks of Pite's earlier work, but Canon feels like an evolution. Some of that feeling originates from Max Richter's recomposition of Antonio Vivaldi's The Four Seasons, which provides a strong musical spine and simple theme to riff on.

Like 2009's Emergence, Canon features lots of mass, synchronized movement that bursts into organized chaos. The dancers variously looked like drops of water in a cresting wave, a swarm of spiders, autumn leaves tumbling down a street, and a frozen torrent. This choreography aims straight for the lizard brain, with every second hitting like those viral videos of elaborate, toppling dominos or 1990s-era screen-savers.

As she does in 2010's Plot Point, Pite also bucks genre conventions to push the art forward. In this case, she eliminates gender roles and more or less dissolves the company's hierarchy into a single organism to refreshen primal truths; the individual depends on the collective and vice versa, the only constant is change, nature rolls on—we can come along or die.

The company clearly embraced the choreography, moving like schools of fish and exploding into the odd solo moments. Their collective energy magnetized the stage, making it impossible to look away.

Pite's blockbuster followed a piece from an earlier trailblazer, George Balanchine. Though his Duo Concertant was much smaller in scale than Canon, the performance was a big hit.

After listening in on the conversation between the two instruments, the dancers hopped to it and embodied the music, reflecting each instrument's (and, in turn, each dancer's) battle for the spotlight before ultimately realizing they work better together. Principals Lucien Postlewaite and Lesley Rausch danced the parts during the show I saw, and they charmed the whole room. Both veterans make everything look so effortless, and so they were perfectly cast in a piece that's partly about the rigors of practiced effortlessness.

Catching Feelings, a world premiere from Dwight Rhoden, was dramatic, hot, leggy, and moody. Dancers whipped up swift extensions and cast shady glares all over the stage as driving cellos and violins propelled the action forward. The whole thing felt like leaning out of your apartment window in a big city, watching love affairs spark up and fizzle out under street lights. All the dancers rose the challenge, but corps dancer Zsilas Michael Hughes found curves and a kind of energy that some of the others just did not. An appropriately kinetic start to a thrilling night of ballet.

PNB owes part of this show's success to the six Corps de Ballet dancers it promoted to the rank of Soloist last Friday. Those dancers include Madison Rayn Abeo, Dammiel Cruz-Garrido, Christopher D'Ariano, Christian Poppe, Leah Terada, and Amanda Morgan, who's another trailblazer on stage this week. With this promotion, she became the first Black woman soloist in the company's 50-year history. All hail.