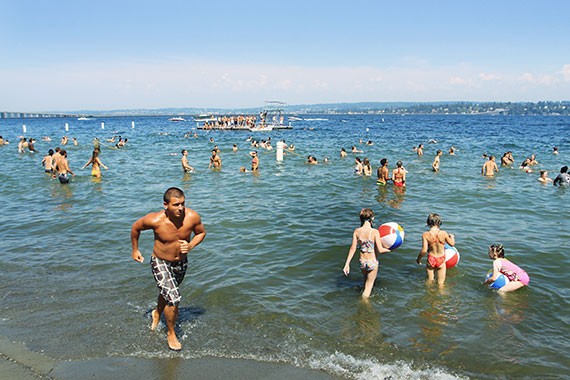 Lake Washington, the mother of all swimming experiences in Seattle. Kelly O

Whenever people ask me where I swim in Seattle, I tell them I go to the edge of the land and get in—everywhere. It's not like Los Angeles or Chicago, where the beaches are obvious. You need a guide to figure out where to go. But I'm convinced there is more water here than anywhere else in the world. I have so much to tell you.

Our outdoor pools are open only in summer, so a year's worth of pent-up desire is visited upon them, and they get crowded. It's still worth the $5.25 to share a slice of temporary civic heaven. (Prices for all public pools, indoor and outdoor, are $5.25 for people ages 18 to 64.)

The heavenliest is Colman (8603 Fauntleroy Way SW) in West Seattle, which I'd enter into a competition for best public pool in America. It sits between a forest and a sweep of Puget Sound, with only a footpath dividing the pool from the actual beach where fishers catch salmon, and you face rich green islands and the leisurely passing of ferries. You walk through the forested Lincoln Park to get to the pool.

Colman is a full 50 meters long and eight lanes wide for hardcore lap swimmers, but it also makes a great splashing rec zone, with a high dive, a low dive, and a 50-foot spiral tube slide. The water itself, uniquely, is pumped directly from the Sound, filtered, and heated to 85 salty degrees. (You float better in salt—you'll see.)

The bathhouse is made of light, sandy brick reminiscent of 1940s glamour. It was built by the third generation of Colmans to live in Seattle. The family built the pool for the city, and it was dedicated on July 4, 1941. (Do I sound besotted with Colman Pool? I did get married there. I did. It rents for $130 per hour.)

The other outdoor pool is Pop Mounger (2535 32nd Ave W) in Magnolia. It's not as big—25 yards—but it's also heated (to 85 degrees) and has a slide. Plus, it has a warm-water pool of 94 degrees for the super-little ones, and the place has that Magnolia feel, on a sunny day a little like a California soap-opera set.

It's summer and you really ought to be out of doors. But I've swam in all but two of the city's eight public pools, and I can tell you that in general they're clean, well-lit, friendly chlorination stations.

Two-year-old Rainier Beach (8825 Rainier Ave S) is the Cadillac of them all, and this place will sell out. Don't get there late. It has a 25-yard lap pool, a warm-water pool, a lazy river (you lie there and the artificial tide sweeps you along in a loop), a hot tub, a sauna, and something called a "water spray"—an indoor fountain where buckets of warm water dump on your head and there is squealing.

Ballard (1471 NW 67th St) and Southwest (2801 SW Thistle St) pools have hot tubs. All indoor pools besides Ballard have saunas. I like the high, skylit ceilings of Medgar Evers (500 23rd Ave) in the Central District, the times when they unleash the wild rope swing at Ballard, and the airiness and chill atmosphere at Helene Madison (13401 Meridian Ave N) in North Seattle, where at the entrance there's a black-and-white photograph of Helene herself, the winningest athlete at the 1932 Olympics with three gold medals (an honor also achieved by an Italian man that same year). She died in 1970 in Seattle.

Of all Seattle pools, Queen Anne (1920 First Ave W) wins the prize for the greatest number of signs giving specific details about the lap-swimming rules. Make of that what you will.

The Lakes and the Sound

Let me just say this: Lake Union and Green Lake are not pristine. At Green Lake, the danger is blue-green algae blooms. They're visible—what the Washington State Department of Health describes as the scum that "often looks like green paint floating on the water" (but they can also be "bluish, brownish, or reddish green"). Don't swim in scum, folks.

Swimming in Lake Union, you are a little creature in a vast city environment. The water feels a little oily, it's true. (Shower after.) Motorboats are allowed in Lake Union, and while you're swimming, you'll cruise by neighborhoods of houseboats and gaze up at hydroplanes landing. The nice new pocket park next to MOHAI (Museum of History & Industry, 860 Terry Ave N), at the northern tip of Amazonland, is a popular place to jump in.

Green Lake is unmotorized and leisurely. The most you'll have to contend with is a gaggle of stand-up paddlers. A main beach has a lifeguard and a dock—when you see a guarded beach, it means the floor of the lake is maintained and the seaweed cut back—but there are also perfectly civilized, unsanctioned (but entirely public) little beaches along the banks, within the larger park of Green Lake. The distance across the lake, east to west, is about a half mile.

And now for Lake Washington, the mother of all swimming experiences in Seattle.

Your northern stops are Matthews Beach (5100 NE 93rd St) and Magnuson Park (7400 Sand Point Way NE). Matthews has a lawn for picnics and geese with good self-esteem. Magnuson has outlaw areas, where you probably shouldn't be swinging on that rope tied to that tree, and areas where you can lie out on a dock or float inside a roped-off area without any worry about authorities or rogue boats. (In all Seattle waters, motorboats must stay 300 feet away from a swimming beach, nonmotorized boats 75 feet.)

In the center of the city, moving southward, there's Madison Park (4201 E Madison St), Denny Blaine (200 Lake Washington Blvd E), and "The Nude Beach." Madison is crowded. It used to be gayer. Denny Blaine has gotten nuder and gayer; it's semi-both. "The Nude Beach" is slightly south of Denny Blaine and it's a little more secluded and definitely nude. It's sausagey but friendly. At any of these places, you can set out and swim a good half mile in either direction along the coast. Or you can just splash around in the shallow area. The border between shallow and deep comes with a wall of kelpish stuff. Just keep swimming. It's a thin wall, and you get right by it to clear (plant-free, albeit lake-ishly green-brown-murky-colored) stretches of water.

Continue going south and you've got Madrona (853 Lake Washington Blvd), where on the south edge, the T-docks are a scenester's paradise. This is where to wear your new and awesome suit. Then, on the way down to Seward Park and in the park itself, there are beaches where families of all colors and creeds barbecue and camp out for the day. These—like Magnuson, Matthews, Madison, and Green Lake—have restrooms and are some of the most traditional lake-like beaches in Seattle. Denny Blaine and the nude beach are a little wilder.

Finally, there's Puget Sound. The most obvious places to dunk into the Sound are Alki in West Seattle (1702 Alki Ave SW) and Golden Gardens in Ballard (8498 Seaview Pl NW), where you've got wide, unobstructed views of the Olympic Mountains and the whole experience feels epic. You will see sailboats bobbing. Oh, is that a jellyfish? Yes. Oh, is it really this cold? Yes. According to the National Oceanic and Atmospheric Administration, the temperature of the Puget Sound water around Seattle ranges from about 49 to about 56 degrees from April to August.

There are places I'm not telling you about. You will have to find them yourself. Anywhere there's public land terminating at the edge of water, you can basically get in around here.

One morning, I rode my bike down to my favorite secret location, on the Sound. I got in the water and swam for a minute. Jellyfishes typically hang out there, but this time I only saw schools of little fish beneath me, and I swam out and back feeling like I owned the place. I was alone. When I finished, I turned around to look back out at the Olympics. In the place I'd just been, not 20 feet out, two seals sat still and looked me right in the eye. It's your house! I admitted quietly, thanking them and getting on my way.

King County tests lakes for bacteria and water temperature once a week from May through September. Results are posted at green2.kingcounty.gov/swimbeach/default.aspx.

Comments 7
Tags: Features
The Stranger depends on your continuing support to provide articles like this one. In return, we pledge our ongoing commitment to truthful, progressive journalism and serving our community. So if you’re able, please consider a small recurring contribution. Thank you—you are appreciated!
CONTRIBUTE NOW