Do they not have dreams or do they just not remember them? Here's what scientists say. 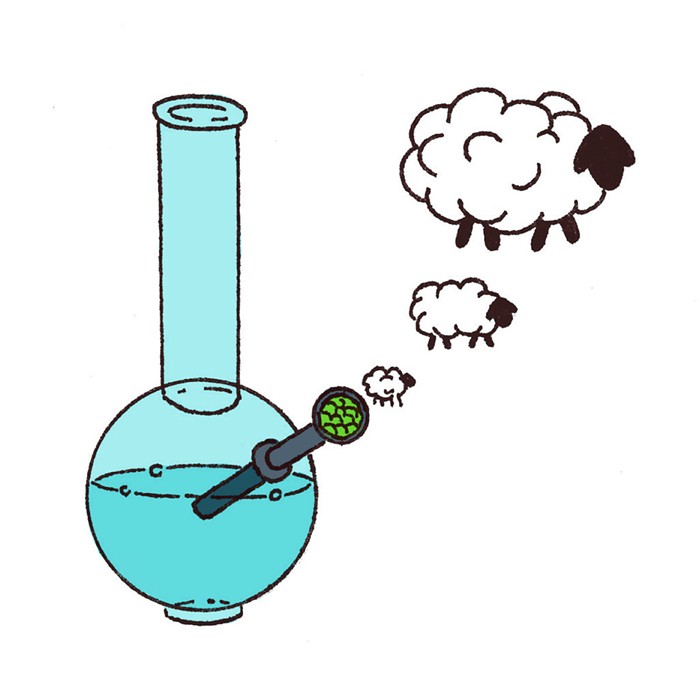 I usually don't remember my dreams. Granted, I smoke a lot of weed. I'm not even sure I have dreams when I smoke weed. But last April, on a backpacking trip, I found myself sleeping underneath the rim of the Grand Canyon, without any weed, a thousand miles away from Washington's recreational stores.

I will never forget falling asleep and having a vivid, colorful dream in which I was holding a million-dollar bong. It was a tiny little thing, no wider than my hand. I sat gazing into its glass walls. The pipe's colors and three-dimensional depth started to make my head spin, and before I knew it, broken shards of the bong lay in a pile of red dirt and someone was screaming at me.

Luckily for me, the bong wasn't real. But the vividness of the dream was. I'm far from the only stoner to report experiencing a burst of intense, memorable dreams after cutting back on pot. A friend of mine quit smoking weed for six months last year, and he reported waking up with a glow every morning from his amazing, weird, hilarious nighttime adventures. In one of his dreams, he met the inventor of the Reese's Peanut Butter Cup.

So what's going on here? Do stoners not dream? Or do they dream normally but just forget what they've dreamed before waking up?

Like many scientific questions surrounding pot, scientists don't have a perfect answer. But there is a lot of evidence showing that cannabis, and especially pot's most famous chemical THC, reduces the amount of time we spend in rapid eye movement (or REM) sleep. This is the stage of sleep where we dream the most, so that may be the reason why many daily cannabis users report never remembering their dreams, according to Dr. Ethan Russo, a board-certified neurologist and one of the country's leading cannabis researchers.

"One of the effects of THC is to suppress REM sleep, and it is the case that people either dream less or remember less while using cannabis," Russo said.

Spending less time in REM sleep and remembering fewer dreams may sound like a bad side effect from using your favorite herb, but there's another side to this coin—reducing dream recall may actually be one of pot's more effective medical uses.

Bad dreams can be one of the most damaging side effects of certain disorders like post-traumatic stress disorder (PTSD) or REM sleep behavior disorder. Sufferers find themselves waking up in the middle of the night, screaming, shouting at whoever's next to them, or even dangerously running out of their beds. Pot can clearly help treat these disorders. A 2014 study found that improving sleep was one of the most frequent reasons people with PTSD used cannabis. Another study in 2014 found that doses of CBD, one of pot's active chemicals, was 100 percent effective in treating REM sleep behavior disorder in the study's participants.

In addition to stopping negative dreams, there's evidence that cannabis can reduce the time it takes to fall asleep. That could be great news to the estimated 60 million Americans that suffer from some type of sleep disorder. Millions of those people take prescription sleep aids that are often accompanied by heavy side effects, sending thousands of people to the emergency room every year, according to the Centers for Disease Control and Prevention.

The therapeutic benefits of cannabis on sleep disorders has been known in the cannabis community for decades. So in many ways, establishment scientists are just now catching up with the anecdotal evidence from medical cannabis circles. But anecdotal evidence doesn't always stand up to rigorous scientific review.

Ryan Vandrey, an associate professor at Johns Hopkins University School of Medicine who studies cannabis and sleep, cautioned that while the plant appears to be ripe for research, pot isn't the silver bullet for long-term sleep therapy, at least not yet. Vandrey said there's significant evidence that the benefits of cannabis on treating sleeping disorders tend to fade quickly.

"If you have people use cannabis every day for an extended period of time, they ended up developing a tolerance. So while it may help with insomnia in the short term—in the long term, it is probably dysfunctional," Vandrey said.

Using cannabis medicinally to treat sleep disorders is made even more difficult by the nature of pot itself. Cannabis is filled with hundreds of different compounds that interact with our bodies in different ways, and each individual piece of pot has different ratios of those compounds. Such shifting variables are a far cry from traditional pharmaceutical medicine, which is composed of engineered chemicals, all of which the scientist can identify and dose precisely.

That's a conundrum with medicinal cannabis. If you investigate claims of cannabis curing everything from Crohn's disease to cancer, you find a very familiar pattern: We know pot can have profound physiological effects on us, but we don't know a lot about how those effects work or how to perfectly control them.

Russo and Vandrey may soon change that.

I have, if anything, the opposite problem when it comes to pot smoking and sleeping. Weed almost always energizes me, even the so-called indica strains that budtenders recommend for nighttime use.

I recently told a budtender that weed very rarely makes me go to sleep but that I wanted to try something as sedative as she could find. She pulled out a baggie of Velvet Kush grown by Clandestine Gardens.

"I've been giving it to my friend who climbs trees for a living and it works for him," she said.

Well, shit, if it sedates a professional tree climber, it should work for a guy who hammers away at a keyboard for a living. I bought the Velvet Kush and brought it home. The nugs were dense and purple, covered in white crystals, and smelled earthy and sweet, with a floral quality.

Those flowers I was smelling might actually be caused by a chemical called linalool, a common cannabis aromatic oil (or terpene) that is also found in lavender. Russo said linalool was "very good as an anti-anxiety medication and helps promote sleep." Linalool's sedating and relaxing properties have been well studied as a stand-alone aromatherapy, but the linalool in pot is, like all the other compounds in any nug, only one of many factors. Scientists aren't sure how linalool works with pot's other compounds, nor do they know how to reproduce its effects.

But that may soon change.

Russo and Vandrey said they recently gained federal approval to start an ambitious clinical trial that will attempt to unravel some of the mysteries surrounding the hundreds of chemicals found in pot. The two scientists are attempting to tease out the individual effects of pot's compounds by isolating and then delivering them to study participants with vaporizers.

The two hope they can use rigorous clinical trials—complete with placebos and replications—to find reproducible and verifiable cannabinoid qualities.

"There are plenty of people out there experimenting and drawing their own conclusions," Russo said. "The pejorative term for that is 'anecdotal experience.' Here we are trying to do a controlled study in which there are placebos and you can draw valid scientific conclusions that will be meaningful to physicians and hopefully patients down the road."

Vandrey said this kind of work needs to be done before cannabis can be used medically in a truly controlled way.

"In order to advance the medicinal use of cannabinoids, we need to understand what parts of the plant are contributing the effects that are desired, and limiting the ones that are producing undesired effects," Vandrey said.

Even if this research only confirms what the medical cannabis community already believes in, it may also inspire continued scientific research. Both scientists declined to list which of the hundreds of chemicals in pot they will be studying.

"The real important thing here is how the terpenoid components of these essential oils interact with the cannabinoids. That is something that some of us believe in fervently, but it's something that we are trying to subject to the scientific method in a way that it will be proven to other people, specifically in the scientific community," Russo said.

The two hope the clinical trials will begin sometime in early 2018, but they don't expect to complete the study for at least two years. That's a long time to wait to find out if linalool really is sedating, so I decided to take the anecdotal approach.

I cracked open that Velvet Kush, loaded it into a pipe, and took a good long hit right before going to bed.

I opened a book, but I didn't get through two pages before I was asleep. The next morning, I awoke refreshed with no signs of drowsiness—and without a dream in my head.