What it's like living with a cat in heat. 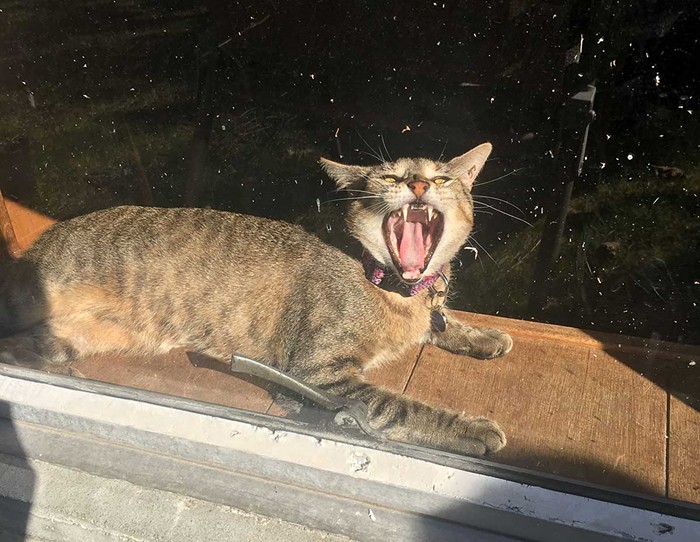 One of the symptoms of a cat being in heat is that she will do anything to escape the confines of the house. My roommates and I did not know that. We did not know anything about cats in heat, actually. We know a lot now.

My roommate Nicole and I had to summon the courage to knock on doors in our mostly-single-family-house neighborhood. We knocked on doors, like, "Hey, we're the only under-30s in your neighborhood, you've probably seen us passing a bong back and forth through that big window? Since we don't close the blinds? Anyway, have you seen our cat? She's gone." It was trying.

We started with a house on the block behind our house. We figured Juno had escaped through the backyard. Logic. But something was going on in this house and it wasn't good. I think we interrupted a domestic crime, a murder, or a heated political debate. The man who answered the door was unnecessarily suspicious, opening the door only a crack. We could only see half his face. Over his shoulder: a worried-looking woman. "What do you want," he said. It wasn't a question. We explained. His eyes darted back and forth between Nicole and me as if we were the fuzz, and not two young women who had simply misplaced our desperate-for-dick cat.

He was no help.

We adopted her from a cat shelter in the University District. She was originally from a shelter in Arkansas. Her paperwork said she had been spayed—in layman's terms, her female parts had been taken out so she couldn't reproduce. But that first day we brought her home, I could tell something was off.

It started with the yowling. Was she just nervous about being in a new space? My old cat AC (aka Attack Cat) would meow whenever he couldn't see a person, because he got lonely. Maybe it was something like that?

Nope. Yowling is one of those words that perfectly suits what it describes. It's nothing like a meow. It is simply and horribly a yowl. Juno would make a sound so loud, it felt otherworldly. How could something so terrible, something patently drawn from the pits of hell, come out of something so small?

There were variations to the yowling. There was the guttural sound that would start low and then pitch up piercingly high, going round and round, like an oscillating fan. There was another that sounded like a baby crying; she'd make that one in the dark corner in front of my room, which we christened the ghost corner. Juno yowled nearly nonstop 24/7.

Once she figured out you weren't going to, uh, do anything besides pet her, Juno would hop off your lap. It was only seconds before the yowling resumed.

This was all happening because Juno was in estrus, and it was nearing spring, the ultimate time for procreation in the animal world. Female cats, I learned on the internet, are known as queens. Queens stay in near-constant heat in springtime, until they're impregnated.

Since I wasn't going to facilitate impregnating my kitten, she'd have to settle for literal heavy petting. But every time I'd pet Juno, she would "assume the position." This involved shimmying so that her head was low and her hips were raised, her tail moving strategically to the side for easy access.

She was smart about it, too. This was literally fuck or die for Juno. She would run in front of me and plant herself, facedown, ass up, as if I'd accidentally—conveniently?—fall into her vagina. One time, I was sitting on the couch and she crawled on my lap. Then she scaled up my body, over my stomach, and past my chest until she was on my shoulder, where she did some wriggling. I knew what was coming as I turned my head and came face-to-face with kitty asshole.

There were a lot of boundary issues during these days.

Juno had a vet appointment the same week we got her. "Hmm. That's not normal," the vet said when she started petting Juno and the cat's bottom popped up. Still, the paperwork said that Juno was spayed, so the vet was inclined to believe it. There was a possibility that the previous surgery missed a piece of ovarian tissue. The only way to tell was through a blood test. The only lab to do that sort of test was in Cornell, New York, apparently. So, $200 poorer, we took our cat home and waited.

For two weeks, the heat got worse. Juno had checked off all the boxes for a cat in heat except one: She hadn't tried to escape. Yet.

It started with the windows. One day, my roommate Tonio came home to find all the plants on his windowsill were not on the windowsill anymore but on the ground, shattered. At night, we kept Juno in one of the bathrooms to minimize yowling, which worked fairly well, until she started throwing herself against the window. That's what it sounded like, at least. Initially I thought our house was under siege. She made a Juno-shaped hole in my blinds because she jumped up so often to yowl into the glass.

When Juno went missing, we saw a single paw print stamped in the plant soil on Tonio's windowsill. His window flopped open uselessly. That's when we started knocking on neighbors' doors.

Some people were home but refused to open the door. Others pretended not to be home at all, even though they clearly were. Finally, we talked to one neighbor who enthusiastically directed her children to help us.

Soon after that, we found Juno darting underneath a parked car. She wasn't hurt. She was fine. But she was still in heat.

Eventually, the blood test came back. She definitely had some ovaries, it said. Finally, Juno went under the knife. The shelter we got her from agreed to pay for it.

Freshly spayed, Juno came back home with us. She's no longer a yowling demon but an actual cat. She cuddles. She plays. She's even softer now; I hadn't realized how rigid she'd been the entire time I'd known her. Meanwhile, my roommates and I have a newfound (and overwhelming) appreciation for silence.

Nathalie Graham is a staff writer at The Stranger. She is not especially good at ping-pong but would love to get better. She writes about neighborhoods, transportation, and whatever else you people want.

Nathalie Graham is a staff writer at The Stranger. She is not especially good at ping-pong but would love to get better. She writes about neighborhoods, transportation, and whatever else you people want.