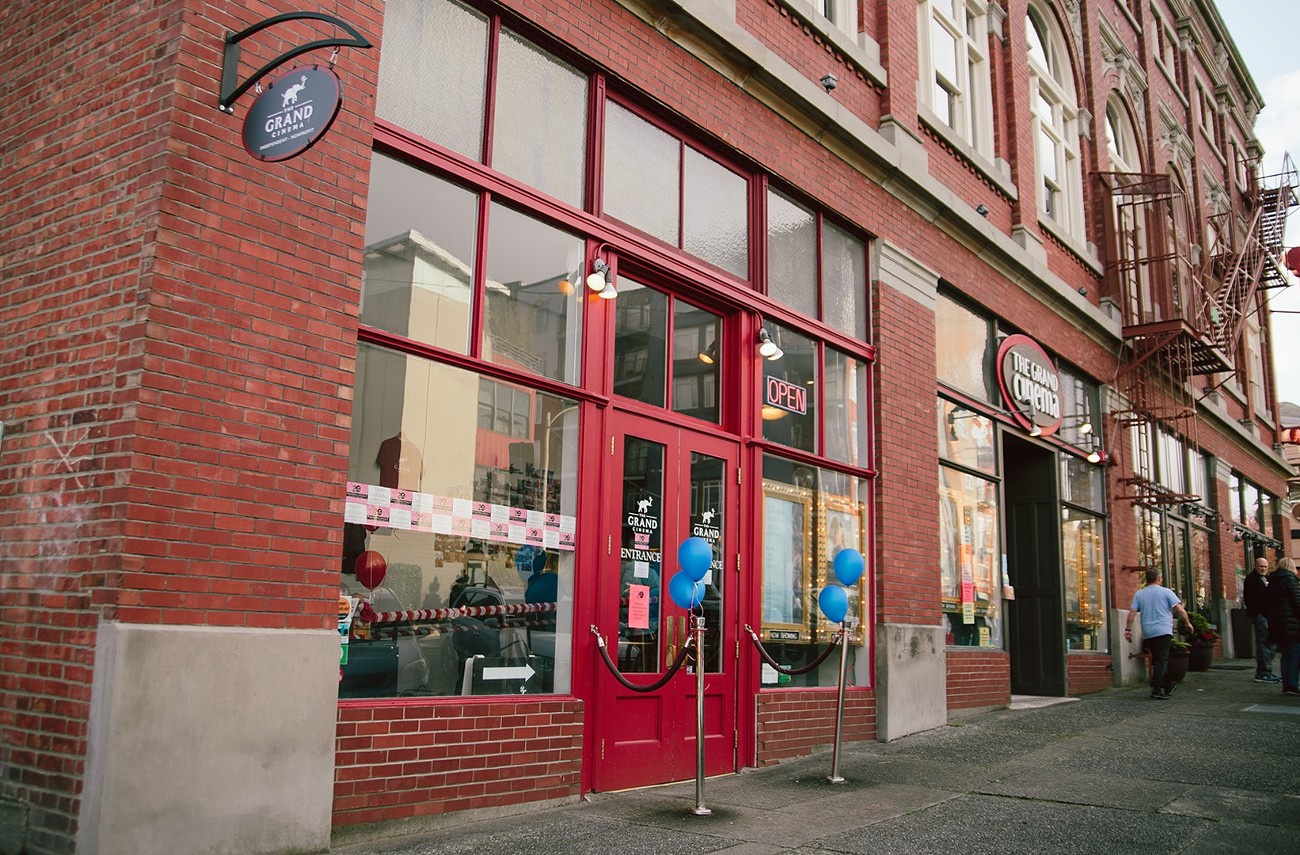 The front of Tacoma's Grand Cinema. Once inside, it will vanish like a dream. Courtesy of Tacoma Film Festival

On the ground floor of a brick building with moldings, engaged columns, and Palladian windows, you will find what has to be the most charming movie theater in this part of the Pacific Northwest, Tacoma's Grand Cinema. There are only two types of movie houses that deserve admiration (or even worship): charming ones and glorious ones.

An example of the former is, of course, Seattle's the Egyptian. (One could also include Cinerama, but its future is far from certain.) Seattle presently has three charming theaters (the Grand Illusion, the Ark Lodge Cinema, and the Beacon), but it also lost two, the Harvard Exit, which closed in 2015, and the Seven Gables, which closed abruptly in 2017.

Tacoma's Grand Cinema opened as the Grand Tacoma Theater in 1997 and became the home of the Tacoma Film Festival in 2006. What makes this festival one of the best in the region is the charm of its main location and smart programming, which is directed by David Dinnell, who joined the Grand in 2018.

But before describing some of the films in this year's festival, which opens on October 6, let's determine what makes a movie theater charming. In the case of the Grand, it's the delightful disorientation caused by the break between the building's exterior and interiors. In modern architecture, there is always this effort to make what you see outside correspond with what you experience inside. There should be no mystery, no magic, as the structure of the building is exposed and functional. No such thing with the Grand. Once you are inside, the outside vanishes like a dream and it becomes its own place with its own rules.

Indeed, despite having visited the cinema several times, I still do not have a fixed mental image of the Grand's interiors. As a consequence, I'm always surprised by the location of its theaters, their sizes, and how they are connected with the lobby and other gathering areas, one of which feels subterranean. And then there's the warmth of the interiors, a feature it shares with the Grand Illusion and Ark Lodge. This is the kind of place you want to watch a movie on a fall or winter day. This feeling of warmness is, of course, enhanced by the smell of popcorn or sips of red wine. The transportive power of a movie is here matched by the transportive warmth of the interiors.

And what movies are screening at this year's festival? Of the 32 "feature documentary and fictional films," I will mention only four. One, Butterfly in the Sky, is a doc about a PBS children's show, Reading Rainbow, hosted, in the '80s and '90s, by one of America's most-loved humans, LeVar Burton. Two, Unrest, a Swiss feature film about two subjects that obsess my Marxist imagination: the 19th century and rapid technological innovation.

Three is the locally produced documentary Buffalo Soldiers: Fighting on Two Fronts. It concerns the 19th-century Black American soldiers who—because of poverty and extremely limited opportunities offered by the race that commanded American society then and now, white people—had to kill Native Americans for a living during the infamous "Indian Wars." And finally, Zia Mohajerjasbi's Know Your Place, a gorgeous feature film set in South Seattle. (Know Your Place is the festival's closing night film.)

Now, Jas Keimig recently described the Orcas Island Film Festival as "our Cannes." I would like to add that the Tacoma Film Festival, which MovieMaker Magazine called "one of the '25 Coolest Film Festivals in the World,'” is our Sundance.

The Tacoma Film Festival runs between October 6 and October 13.