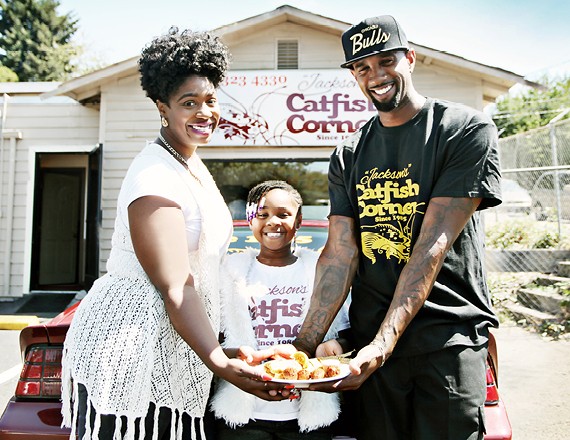 ALL IN THE FAMILY: Terrell Jackson with his wife, Rachel, and daughter, Raymiah. “It’s one big huge family affair,” says Terrell. Kelly O

When Woodrow ("Woody") Jackson and his wife, Rosemary ("Rosie"), first opened Catfish Corner in the Central District in 1985, it wasn't entirely by choice. "I was a steelworker, but Bethlehem Steel shut down," said Woody, who grew up fishing with his grandfather on the Louisiana bayou. "The only thing I knew how to do was fry catfish."

The Jacksons started holding fish fries in their backyard on Beacon Hill. They were so popular that the family moved the operation to the front yard. When a space on the corner of Cherry Street and Martin Luther King Jr. Way became available, just a few blocks from where Woody first lived when he moved to Seattle, he knew what he needed to do.

Over the next 24 years, Catfish Corner became a Seattle institution. Its workers included a rotating cast of members of Woody and Rosie's growing family. But after decades of hard work, the couple was ready to retire. In 2009, they sold the business to family friends who they believed could continue running it successfully. Unfortunately, it didn't work out that way, and after a few years, the restaurant abruptly closed in August of 2014. The city mourned.

Enter Terrell Jackson, Woody and Rosie's eldest grandson. Nickname: Catfish ("I didn't go to no school plays, no school dances, because I was always working at Catfish Corner"). Terrell was born the same year his grandparents started their business, so when the restaurant shut down, he knew what he needed to do.

"I am the first grandson of Woodrow and Rosemary Jackson, the original owners of Catfish Corner," he said proudly. "I know all the recipes. I had to bring it back—the correct way, the way it's supposed to be run."

So this spring, Terrell started, like his grandfather, with outdoor fish fries—first in a tent outside a motorcycle club in Skyway, then in a parking lot by the Rainier Beach light-rail station. Since June, he and his family ("My wife, my mom, my brothers, my cousins—it's one big huge family affair") have been serving their deep-fried catfish and hush puppies (as well as red snapper and burgers) from a small but lively storefront in the Brighton neighborhood of Rainier Valley, in a little plaza that's also home to Karibu, an Ethiopian-owned barber shop, and Auto Fitness Detail, a hand car-washing business. (Fans of the original Catfish Corner, located just across the street from T-Bone's Hand Car Wash & Detailing, will find comfort in this fortuitous coincidence.)

But the greatest assurance that all is right in the world comes with the first bite of catfish—moist, flaky, and minerally sweet—that's lightly dredged in cornmeal and given a bath in hot oil. The recipe is the same one used by Woody's grandmother; there will never be a need to change it.

While the Jacksons are not afraid to use spice, they wisely keep their signature dish simple. The fish, farm-raised in ponds in Mississippi, eat a grain-based diet that gives them a milder, sweeter flavor than their wild, river-bottom-dwelling counterparts. While it's hard for me to stray from my favorite order of bits and pups ($6.95)—small nuggets of fillet served alongside four creamy, garlicky, beautifully brown hush puppies—I was delighted by a whole catfish dinner ($11.25), which comes with the added bonus of a crunchy, oily tail, as well as soft bones from which you can suck little bits of juicy flesh. Every morsel was absolutely delicious.

Then there is the matter of Catfish Corner's tartar sauce, a glorious pink substance about which an entire article could be written. It's tangy, smoky, and spicy all at once, strangely un-tartar-like, and wholly addictive. It's entirely Rosie's creation.

"It has a lot of different spices in it, which makes the color unique," she said. "It's not just a white sauce with green pickles." Along with cayenne and dill, her recipe includes freshly diced onion and green pepper, which she said makes all the difference.

Terrell hasn't changed anything about Catfish Corner besides the location. He's even running the same weekly specials his grandparents did. On Tuesdays, there's Cajun-style catfish ($8.99): fillets rubbed with bright-red cayenne and paprika, then baked in the oven in a generous amount of butter. And on Wednesdays, there's another Louisiana specialty: seafood gumbo ($12.95)—dark and deeply flavorful, thanks to a long-cooked roux, with plenty of chicken, sausage, and shrimp. Adding another layer of flavor are large pieces of cracked crab, still in their shells, from which you can slurp briny, rich liquid.

While Catfish Corner has only been in the building for two months, there's a familiar feeling of warmth and comfort to the place, including the old soul music that's usually playing on the stereo. You can eat in the dining room, which also happens to be the car wash waiting area, but most people tend to eat outside, either in their cars with the windows rolled down or standing and talking to the men washing cars and sitting in the five or so chairs scattered throughout the parking lot.

While the new incarnation of Catfish Corner has been a success so far, Terrell isn't relaxing just yet. "What I've been doing for the last 60 days here ain't nothing compared to what my grandparents did the last 30 years," he said. "I got a lot more to go."

He meant it. When I met with the Jacksons, Terrell had just finalized plans to open another Jackson's Catfish Corner in a modern, 2,000-square-foot space at 23rd and Jackson. He hopes to have it open within the next six months. While it's a return to a familiar place, it also represents the family's future.

"We're doing it," he declared. "Catfish Corner is coming back to the Central District! We always said we would go back to that area, because that is our home. Catfish Corner was there for 30 years, and my grandparents deserve to have one there forever."

"I'm excited," said Woody in his Louisiana drawl, the words coming out of his mouth as slowly as sap from a tree. "And I don't get excited too easily."

As Terrell, Woody, and Rosie sat back beaming, I thought of the opening lines of the Isley Brothers' song "Footsteps in the Dark," which was playing when I stopped by Jackson's Catfish Corner a few days earlier: Are we really sure? Can a love that lasted for so long still endure?

The answer, thankfully, is yes.

Comments 1
Tags: Food & Drink 25 Years of the Stranger
The Stranger depends on your continuing support to provide articles like this one. In return, we pledge our ongoing commitment to truthful, progressive journalism and serving our community. So if you’re able, please consider a small recurring contribution. Thank you—you are appreciated!
CONTRIBUTE NOW