Moonlight Cafe's Vegetarian Sesame "Beef" Has a Magnetic Pull on Me

I've Been Eating It for a Decade, and I'm Still Not Sick of It 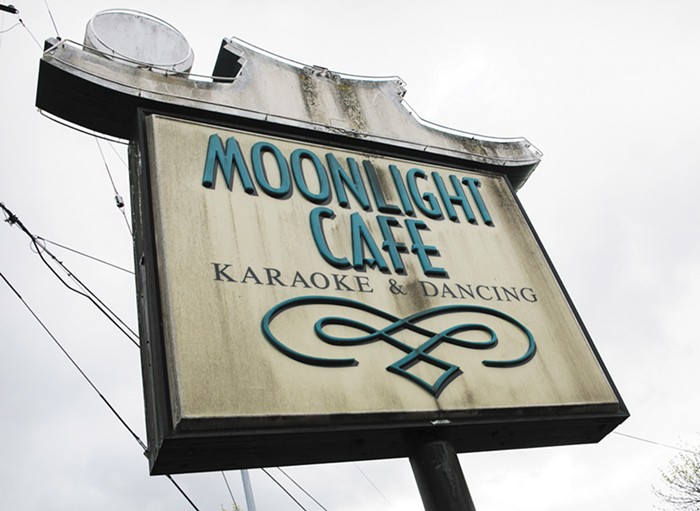 Ask anyone at the Moonlight Cafe when the karaoke happens, and they stare at you like you’re insane. jennifer richard
Tweet

I've eaten Moonlight Cafe's vegetarian sesame beef with varying frequency for a decade. When I lived for $300 a month in a punk house with a few DIY bands, I was taken on a date to Moonlight, where I discovered its vegetable-protein alchemy. Even Burger King now has "vegetarian options," but nearly every item on the menu at Moonlight is available vegetarian (including lobster!). At the time of my first visit, I was so poor that I subsisted on premade burritos found in the dumpster, but Moonlight Cafe soon became my weekly treat to myself. Lunch specials there were (and are) affordable even on movie-theater wages. Now that I live in the International District, Moonlight Cafe is only a few blocks from my apartment. My bike lists in the direction of Moonlight as I ride by; I think it's the magnetic pull of that perfectly seasoned gluten.

Moonlight Cafe is a Vietnamese restaurant on Jackson and 20th, bearing a delightful resemblance to the geometrical designs on kids' notebooks from the early 1990s. More than one of its neon signs advertise karaoke, but if you ask anyone there when karaoke happens, they stare at you like you're insane. Still, the raised floor on one side of the dining area was clearly once a stage. It wouldn't matter what kind of entertainment they offered—I go for the sesame beef.

I tend to get obsessed with certain foods. My first food obsession was peanut butter and jelly on toast. I ate that (with a rotating selection of chips and fruit snacks) every day for lunch from second grade until sixth. I recently ate the same banh mi every day for two weeks. Even when one of these special items falls out of my normal rotation, it joins an index of things I am ready to eat at any time for any reason. Oddly, I'm not picky. I'll try anything—jackfruit, fried crickets—but for me, some things are just perfect, sliding into place like culinary puzzle pieces. Moonlight Cafe's sesame "beef" is one of those things.

It could probably be seductive to anyone, but it's particularly seductive to vegetarians. Any vegetarian who's suffered through weird burned vegetable skewers at every barbecue forever, pining for the source of that barbecue smell but grossed out by meat's gristle and fat lumps, should try it.

The dark, juicy pile of "beef," with a reddish tint that screams "eat me" to the core of the reptile brain, is served on a bed of crisp shredded lettuce, green onions, cucumber slices, and steamed broccoli. Mushy broccoli is nauseating, undercooked broccoli forces the jaw to work like a goat's, but somehow this broccoli is always exactly the right texture. Each tender, slightly chewy bite of beef is bedazzled with sesame seeds as visually appealing as the stripes of sauce that zigzag across plates in fancy restaurants. The way they feel on my tongue makes me want another bite immediately, even after 10 years of them.

As addictive as the sesame beef may be, I knew that if I liked one thing that much, I'd be stupid not to explore the rest of the menu. I've since tried Moonlight's fried rice with egg rolls and grilled "pork," their Mongolian "beef," and their soups. The pho dac biet chay should not be neglected. It's superior to average veggie pho because rather than just a few tofu strips, it contains a parade of veggie meats including veggie mini chicken ham. This is the protein in all of the dishes labeled "chicken," and in my opinion, it is the crown jewel of glutens, the vegetarian equivalent of the prize goose in A Christmas Carol. It soaks up flavor like tofu and tastes like both chicken and ham—the same way cold cuts do, without any of the concerns raised by cold cuts, such as "How many animal anuses am I eating right now?" When I ate at Moonlight Cafe with my uncle, he swore he had accidentally ordered real pork—but he hadn't.

This brings me to the only Moonlight Cafe caveat I'm aware of. If you are a meat eater, you may be underwhelmed. I've heard this from a few carnivores who've dined with me there. It isn't because the meat dishes are inferior to the "meat" dishes in any way, it's just that meat eaters are used to the variety of proteins that make Moonlight so particularly special for vegetarians.

Besides on a first date (the food is hearty but mostly shaped in such a way it won't get all over your face), the best way to eat at Moonlight Cafe is high out of your mind. I used to hallucinate every time I smoked cannabis, so I feared stoned restaurant outings would be unpleasant, if not impossible. When I began having the hungry/horny/relaxed/uncontrollable-laughter response most people do to weed, I made going out to eat high a goal. Fortunately, my cousin, a favorite fellow drug astronaut, lives across the street from Moonlight, so rather than a potentially stressful planned meal, the first one happened simply because we were high and fucking starving and Moonlight was the closest food source. We levitated across the street with a friend who hadn't smoked in a very long while and made a charming running commentary about how wonderful everything was.

On that trip, I had stir-fried "beef" with cashews and vegetables. It was one of the best dinners of my life. I remember how everything on the plate looked, the steaming fresh broccoli, the fluffy mound of brown rice, the cashews glistening with sauce and oil. I'm not usually able to eat a full Moonlight Cafe entrée with rice in one sitting, but I finished mine and sampled my dining companions' dinners. I could feel my body absorbing the food like a houseplant so thirsty that its leaves visibly unwrinkle the moment water touches the cracked potting soil.

The neon and '90s geometry were surreal, but not in a threatening way—it was like watching Blade Runner or Liquid Sky inside a fleece blanket inside a giant martini. We floated back across the street, at peace with the world.

The Crazy Things That Happen Inside Orient Express

My Long History with the Magical Railcar Restaurant and Bar

Put Your Fake Meat in My Mouth!