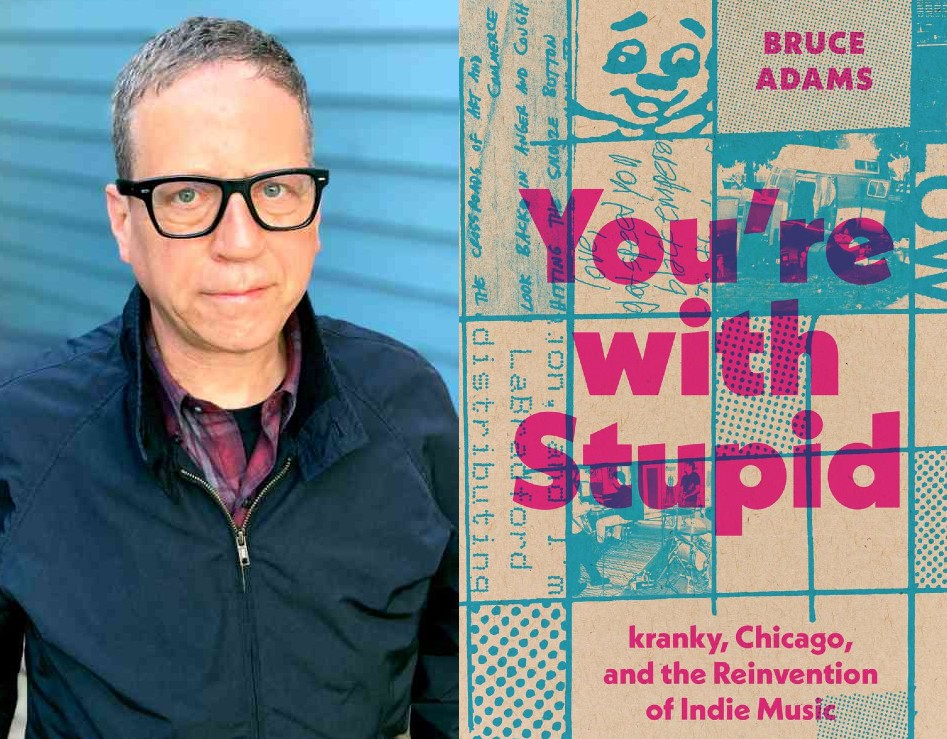 An insider's look at the kranky label's mystique and Chicago's dynamic music scene. Courtesy of University of Texas Press

Oh, to be young and obsessive about music in Chicago in the late '80s and early '90s. That fertile sonic playground birthed outstanding record labels such as Drag City, Thrill Jockey, Bloodshot, and kranky, all of which are going strong today. Bruce Adams co-owned the latter with Joel Leoschke, and he proves to be an incisive and wry observer of the Windy City's paradigm-shifting musical ecosystem and his role in shaping rock's vanguard in You're with Stupid: kranky, Chicago, and the Reinvention of Indie Music (University of Texas Press).

It's hard to overstate how big of an impact kranky had on the underground-music world when the Chicago label dropped its initial slew of releases in the mid-'90s, including Labradford's Prazision LP, Dadamah's This Is Not a Dream, and Jessamine and Bowery Electric's self-titled debuts—but lord knows I tried. With seemingly every record, kranky was redefining rock's parameters and exemplifying the radical stylistic contours of what critic Simon Reynolds had coined “post-rock”—although Leoschke and Adams would never use that term without scare quotes.

In those days, I wrote for Alternative Press magazine as kranky was beginning its reign of aesthetic innovation; my gushing review of Prazision LP might have been the first to appear in a major publication. (Adams has called his book “a love letter to Labradford,” the band who inspired him and Leoschke to start kranky.)

Among several others, I was hooked from the get-go. Combine the label's fascinating music with brash branding slogans (“What we want, when you need it,” etc.) and the finest logo in the industry, and you had the makings of a kult. While my fervor for kranky's output gradually diminished over the years, the label remains a reliable incubator of interesting aural artifacts, with big-selling acts Godspeed You! Black Emperor, Low, and Deerhunter keeping the lights on, and Grouper, Stars of the Lid, and loscil continuing to burnish its legacy.

Early in the book, Adams notes that Chicago had boasted a rich musical history for decades before kranky appeared, citing the nonprofit organization Association for the Advancement of Creative Music's influential avant-garde activities as formative. He views kranky as part of the city's continuum of boundary-pushing music, and rightly so.

Adams and Leoschke met in 1991 while both worked at the Cargo distribution company. They bonded over their love of overlooked classics on the ECM and Editions EG imprints that they discovered in cut-out bins. These labels' output, Adams writes, “represented a set of less contrived possibilities” compared to the era's indie-rock status quo. Anyone who got signed to kranky had to receive approval from both discerning gentlemen.

Taking inspiration from Corey Rusk's Touch and Go label, Adams and Leoschke established fair payments for its artists and maintained a hands-off approach to their career decisions. When Bowery Electric left kranky for the much larger indie Beggars Banquet, the band thought they'd make more money; they were wrong.

In addition to a compressed history of kranky from its 1993 inception to Adams's departure in 2005, the book serves as a primer on how to run a record company profitably and with integrity. The label's success—modest by major-label standards, obviously—derived from its owners eschewing the industry's most toxic practices and keeping expectations realistic.

Adams lays out the “kranky kommandments,” which resulted in long-term solvency and artist satisfaction. Kranky—which Leoschke now runs out of Portland, OR, with Brian Foote—became a paragon for operating frugally and with an instinct for mystique. Album artwork with artist photos were forbidden, as were lyric sheets and tribute albums. Among the most admirable edicts are “Thou shalt pay royalties on time” and “Thou shalt not make decisions based on commercial rather than artistic concerns.” The most unsatisfying one for me, as a collector, is “Thou shalt not release seven-inch singles,” but Adams says that they're not profitable compared to 12-inch releases.

As for the local angle, credit kranky for having the savviness to recognize the rarefied talents of Seattle's Jessamine and Edmonds' Magnog. Both groups extended the scope of space rock in this region with more brilliance than anyone this side of Hovercraft and both artists embodied kranky's ethos of making music that transcends its time and place. In an interview in the book with Jessamine bassist/vocalist Dawn Smithson, Adams exposes the sexism she experienced, even in the music business' so-called more enlightened sectors. To kranky's credit, the company has always championed women musicians, including Valet, Jessica Bailiff, and Christina Vantzou.

While I would've been happy with 100% kranky kontent in You're with Stupid, Adams does a solid job of portraying Chicago's uniquely vital role in the music biz. He's fair, funny, and occasionally harsh when discussing the city's divisive echelon of clout-chasing alt rock: Smashing Pumpkins, Liz Phair, Veruca Salt, and Urge Overkill. Adams balances that with vivid portraits of Chicago's musical underground at a particularly robust time, as unconventional rock, jazz, experimental, and electronic musicians fruitfully collaborated, with the support of several venues and labels. It was a rare situation in which egos were kept in check and cooperation reigned.

One problem with You're with Stupid is the shoddy editing that allowed into print misspellings of several proper nouns, e.g., Glen Kotche, 13th Story Elevators, Hal Russel, the Left Bank, Stan Brakeage, Rafael Anton Isarri, Peter Jefferson, Alistair Galbraith, and Yankee Foxtrot Motel [sic as can be]. Another quibble is Adams's blanket dismissal of New Age, which arises when he bristles at such a descriptor applied to kranky artist Tomorrowland. Bruce offered valid reasons for this bias when I interviewed him at Elliott Bay Book Co. earlier this month (working at Ann Arbor record store Schoolkids in the '80s brought him into contact with the genre's inferior specimens and he dislikes most music that serves specific functions), but as with any musical style, there are standouts.

These issues aside, You're with Stupid abounds with interesting insights about musical and cultural niches that deserve more attention and, more importantly, it reveals the inner workings of one of history's greatest record companies.