So Far, He's the Only Incumbent to Ask for a Second Term 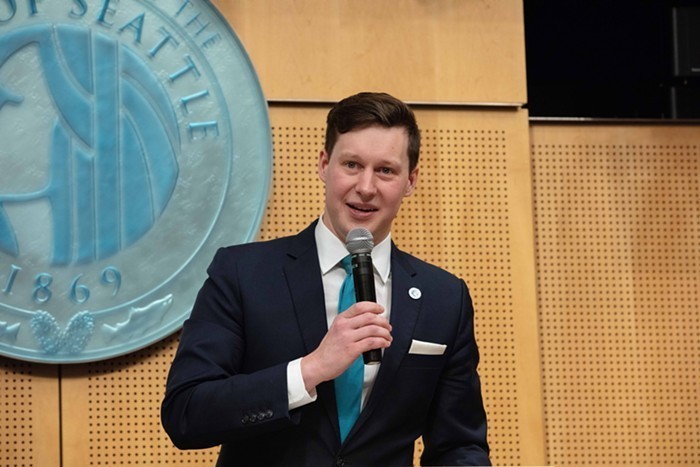 The Downtown Seattle Association and Congresswoman Pramila Jayapal like him. LESTER BLACK

On Tuesday morning, Council Member Andrew J. Lewis announced his run for re-election for Seattle City Council District 7, which represents Queen Anne, the downtown core, and the ghost of Magnolia, RIP. If voters give him another four years in City Hall, Lewis said he will focus on “revitalizing” downtown by converting office buildings into housing and putting a lid over I-5. He also wants to stand up the police alternative pilot program he fought for during budget negotiations.

In 2019, Lewis, then an assistant city attorney, beat a retired cop who opposed upzones. Since then, Lewis lowered the cost of permanent supportive housing, fought to preserve JustCARE’s slower approach to sweeps, and won more money for parks than the Mayor initially proposed.

He said he’s found the most success on council by “working collaboratively” and “building bridges.” And he certainly has built bridges in all directions–for better and for worse. For example, he voted with the progressives to override the former Mayor’s veto on a budget that slightly reduced police funding in 2020. He also went out on a limb to support an unpopular budget item in 2022 that would have paved the way for decommodified housing in Seattle.

On the other hand, he voted to end the eviction moratorium and hazard pay for grocery workers. He also voted to authorize hiring incentives for cops despite inconclusive evidence that it would actually help the department retain more officers. Given this history, Lewis branded himself as “someone who's tried to lead on a variety of different issues that defy easy categorization.”

So far, no newcomers have launched a challenge for his seat from the left or from the right. If someone does jump into the race, Lewis said he wants to foster a spirit of unity during the campaign.

“I would hope that we can just have a conversation where it's not so much about left or right but about really coming together to fix some of these problems that are impacting livability for all of us,” Lewis said.

Lewis is the first incumbent to launch a 2023 re-election campaign. Council Members Lisa Herbold, Debra Juarez, and Alex Pedersen already announced they will not run again.

With so many open seats and possibly more to come, the council’s balance of power could shift either way. Lewis could stay in the relative middle of the council, unless a bunch of Antifa foot soldiers infiltrate the council and then push the Overton window to the left. However, if the “Seattle is Dying” crowd inspires enough homeowners to hit the ballot box, as they have so often in these odd-year elections, then the council could maintain its rightward trajectory.