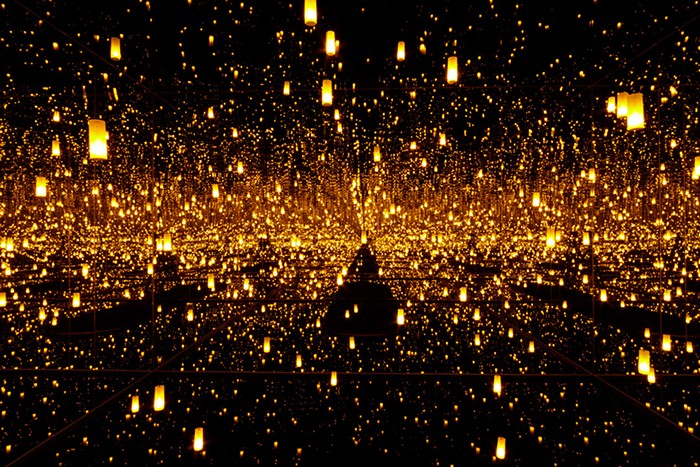 Selfie culture has descended upon the art world, and there is no turning back. Perhaps no greater proof of this exists than Yayoi Kusama’s Infinity Mirrors, the latest (and greatest) art exhibit to ever hit Instagram—oops, I mean, museums. The highly-anticipated show from the hugely popular Japanese artist is coming to the Seattle Art Museum, the second stop on its national tour, and opens June 30.

I know the urge to selfie here is strong; Kusama’s bright, dazzling work beckons you to capture the kaleidoscopic funhouse mirrors and giant polka-dotted sculptures. But I am asking you—BEGGING you—to refrain from taking any selfies or cell phone photos at the exhibit. Especially in the infinity mirror rooms themselves, where you’ll have mere seconds to take in the piece. Use that time wisely.

Art critic Emily Pothast called Infinity Mirrors “one of the must-see experiences of the summer.” ‘Experience’ being the key word here (well, ‘must-see’ is also an important word, since advance tickets are already sold out, and you’ll now have to wait in line to see it).

I understand that photos are the perfect way to tell everyone you know that you were there. But were you there, really? Art, to be successful, ultimately relies on one thing—being present. Snapping photos at exhibits is like texting while driving. Well, maybe it's not as dangerous, but if you keep doing it, at some point you’re going to miss something important.

Also, for God’s sake, PLEASE don’t be this person. (Although, actually, he’s the reason why the pumpkin room, titled All the Eternal Love I Have for the Pumpkins, is now the only Infinity Mirrors room that does not allow photographs, so maybe I should be thanking him?).

Kusama wants us to play, to experience and in some instances, to engage; the final room of the exhibit, The Obliteration Room, asks visitors to affix colorful sticker-dots on all white-painted furniture, and by the time the exhibit ends in September, the room will become festooned with them. A crucial concept of Kusama’s work is that of self-obliteration—the dissolving of identity into the formlessness of eternity. Obviously, you can’t begin to comprehend what self-obliteration actually is while taking a freaking selfie.

After most of the press had made their way to end of the exhibit, I finally had my chance to be alone with infinity, for 30 seconds (which can feel like an eternity—the good kind—when you don’t have to think about which hashtag you are going to use next). In Aftermath of Obliteration of Eternity, an infinity mirror room from 2009, what seemed like thousands of Japanese lanterns gently flickered in the darkness, creating the feeling that the finite is just an illusion.

I thought about the tens of thousands of lives that were extinguished in Hiroshima (which Kusama, in part, symbolized by the lanterns) when the ultimate hubris of human’s urge to destroy ripped through to the very core of matter. I thought about my own fragile mortality, the inevitable aging process that will cause me to have to leave this physical form one day, and the wild hope that after I die, maybe—just maybe—I’ll leave my own tiny light, too, flickering in this never-ending, constantly rebirthing universe.

Doubtless, if I had been snapping selfies, I wouldn’t have been able to experience even half these thoughts and feelings in the time allotted to me. So take my advice—if you are planning on attending Infinity Mirrors, put the cell phones away, and let the emotions in. You’ll be really glad you did.