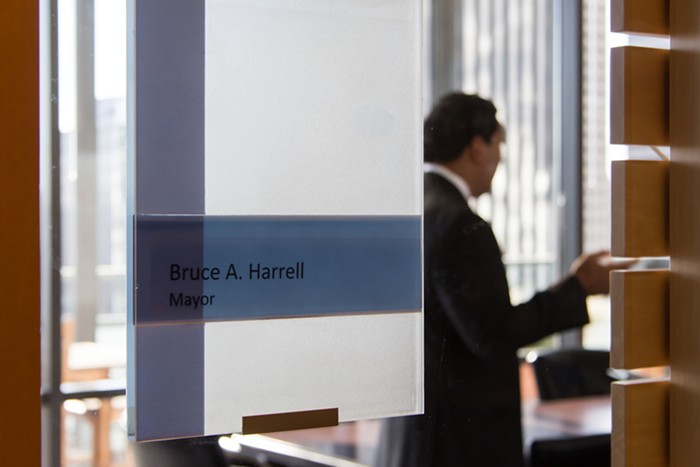 Come next week, Seattle will get its third mayor in a year.

Council President Harrell took over temporarily Wednesday night after Ed Murray resigned in the wake of a fifth allegation of sexual abuse. But Harrell had the choice of whether to remain in that position or not. Today, Harrell said he would return to the council instead of staying mayor. Council Member Tim Burgess could be his replacement.

“I have full confidence the council will elect a capable council member,” Harrell said today. But he would not "comment on that process."

“I was elected to serve the constituents of District 2 and I will continue to do so," Harrell said of his south Seattle council district. "I have lived in that district most of my life… and it is truly one of the most diverse and colorful communities in this city.”

Council Member Sally Bagshaw said today she would nominate Tim Burgess for interim mayor Monday. Burgess declined to comment, but Bagshaw said he has expressed interest in the job.

Burgess, a former cop and ad man, has been on the council for a decade and championed expanded access to pre-school and the nurse-family partnership for new mothers. He also has a reputation as one of the council’s most centrist, business-friendly members.

Making Burgess mayor would leave his council seat empty. Within five days, the council would vote to approve him mayor. Then, the council would within 20 days fill his council seat with an interim council member. That council member wouldn’t be in place for long, though. Burgess was already planning to retire at the end of this year. Jon Grant and Teresa Mosqueda are running to replace him. Whichever of them won in November would be sworn in when election results are certified in late November.

The move would also mean a shakeup to the biggest issue before the city council this fall: the 2018 budget. On September 25, the interim mayor will deliver the mayor’s budget to the council, which will then revise and approve it. According to the city budget office, that budget is already largely done.

• One order indicates Seattle’s plans to compete for Amazon’s recently announced second headquarters. The company previously said it would seek another North American city for another headquarters, setting off a storm of speculation about whether the corporation planned to ditch Seattle for a more “business-friendly” environment. Amazon issued a request for proposals for a new headquarters but it looked unlikely Seattle would compete. Harrell said today Seattle will respond to Amazon's request by October 19.

“If there are to be an additional 50,000 jobs, from warehouse workers to software engineers, they should be for our residents,” Harrell said.

The order also creates a “business retention task force” that will include business and labor representatives. The city

“This kind of issue really should not happen again,” Harrell said of Amazon. “We need to do everything we can possibly to make sure we have the kind of environment that will be conducive to that kind of health—that kind of economic health and growth.”

• Another takes on the county’s new youth jail. Voters in 2012 approved a controversial new $210 million courthouse and youth jail to replace the current dilapidated facility.

Harrell previously supported the project but has since expressed skepticism. He said today he and King County Council member Rod Dembowski have asked a “simple” question about the project: “If we knew in 2012 what we know right now about mass incarceration [and] racial disparities in our judicial system; if we knew about the quote unquote War on Drugs, how it devastates communities of color; if we knew about the abuses of prosecutorial discretion and historical and institutional racism, would we consider a different approach? And as mayor, I would say yes.”

A mayoral spokesperson declined to elaborate on the meaning or intent of this order. The order “does not stop” the youth jail, Harrell said, but “if we do this right the county may look at what they’re building and pivot. That would be the goal.”

“Our city has become filthy,” Harrell said. “As an elected official I’m embarrassed driving and walking around some of the areas of this city… We have to reset community norms.”

• A fourth will direct the city’s Chief Technology Officer to “assess the risks” related to the city’s data management, including data used to respond to public records requests. The order asks the CTO to deliver a risk assessment by November 15.

“I don’t think a lot of people have an appreciation for how sophisticated the hackers are,” Harrell said.