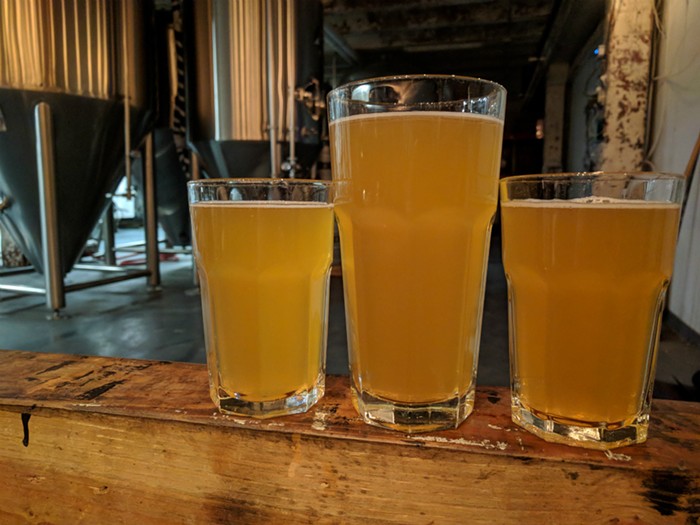 Conceived in England in the late 18th century, the iconic India pale ale has a storied past and a bright future. In the 1700s, beer makers added extra hops during the brewing process; hops was a natural preservative, and kept the beer fresh in the barrels that were shipped from England to the Indian colonies. This gave rounder pale ales a sharper bite and soon enough, the distinctive taste of IPAs became embedded in our culture. The style has lived on ever since.

Yakima Valley in Washington is one of the most productive hops-growing regions in the world. As a result, local breweries—which have grown substantially over the last 15 years, seemingly quintupling in number and variety—have a unique opportunity to experiment with different hop flavors and recipes, and Seattle has quickly become the IPA center of the universe. But which Emerald City brewery makes it best? I decided to find out with some help from beer enthusiasts Evan Flory-Barnes and Lindsey Scully.

A Certified Cicerone® (considered to be the most respected credential for beer professionals), Scully is an encyclopedia of beer knowledge. Flory-Barnes, among the city’s most popular musicians, is usually out late performing and often enjoys an IPA or two after his gigs. And I am a former Seattle beer columnist who just loves the stuff. On our search, we sampled nine of Seattle’s most popular and best-recognized IPAs in the tap houses where they were brewed. We rated each based on five categories—flavor, aroma, body, vibe of the tap house, and overall thoughtfulness of the experience—and scored each category from 1 to 10, with a possible high score of 150. Without further ado, here are the scores.

The Platonic Ideal of an IPA was offered in a bustling brewpub that’s the ideal setting for a sunny day. Kids and dogs are welcome at Fremont Brewing, with free pretzels on offer and a plethora of outdoor tables. You won’t leave upset. Clocking it at 6.2 percent ABV (alcohol by volume) and 80 IBU (international bitterness units), the bright, light-bodied (for an IPA) beer is consistent, effervescent, not too malty (sweet) and not too hoppy (bitter). It’s as Goldilocks would say: just right.

Second: Stoup Citra at Stoup Brewing (127)
Stoup’s makes for an excellent neighborhood hangout. Inside, you can see the bright glint of the brew kettles or you can head upstairs for trivia on certain days of the week. Food trucks are often parked outside to satisfy beer buzz munchies. And inside, the brewery serves some of the cleanest and crispest beers on the Seattle market. Their Citra IPA— made with Citra hops that taste, as you might have guessed, citrusy—clocks in at 6.9 percent ABV with “plenty” of IBU, according to Stoup. It’s a lovely pint full of summertime.

This beer has won the industry’s top accolades, and even though it lands third on our list, it’s certainly no slouch. The Bodi, which measures in at 6.9 percent ABV and 80 IBU, is bigger in body than the above brews, with larger, more robust hop flavors. It could have landed at the top of this list, but Georgetown’s tasting room is simply that: a place where you can get samples from the on-site taps and fill your growlers. It’s a great spot to try their new experimental beers, and you can tell the beertenders love working there, but it closes at 6 p.m. and isn’t meant as a true meeting place.

If you’re a student of Seattle IPAs, you’ll understand how the first three mentioned here embody a more modern recipe—lighter in color, brighter in citrus, and often thinner in body. The Pike IPA, however, is classic Northwest. The beer is heftier than what you find at Fremont and Stoup, and it’s piney compared to the Bodi. At 6 percent ABV and 45 IBU, the Pike IPA is a ’90s-era creation. Flory-Barnes called it a “confident” beer. Indeed, there is nothing experimental about this IPA. And the subterranean Pike brewpub, with stickers on the walls and exposed black piping, is classic Seattle, too.

Part of the Ballard “Beer-Muda Triangle,” as dubbed by Scully—which includes Stoup and Lucky Envelope (more on them to come)—Reuben’s is a popular spot to get a pint and watch the Seattle Sounders with friends or your dog. Its tap list is extensive and the Crikey is a fine IPA. It’s a more malt-forward, bigger bodied beer than Stoup’s, and pithier compared to Pike’s. But at 6.8 percent ABV and 53 IBU, you can order a pint on a Saturday afternoon and sit back with a refreshed, “Ahhhhh!”

Cloudburst is a commendable brewery. They make new IPAs seemingly every two weeks, each from a different recipe. But when you undertake this massive variety, some aspects are going to slip through the proverbial cracks. While we’ve all enjoyed stellar Cloudburst IPAs, we only moderately enjoyed one of their most recent creations, the Jerk Store, which lists at 7.1 percent ABV and 60 IBU. The beer, while light in body and bright in flavor, drank flat with no appealing froth. Grapefruit notes tickled the tongue, but they weren’t enough to overcome the weak body and at times claustrophobic taproom.

Another historic beer, the Immortal, which lists at 6.3 percent ABV and 62 IBU, is similar in style to Pike’s IPA, just not quite as good. With a sweeter finish, the Immortal resembles a British IPA more in style than a modern Northwest IPA—despite the fact that it helped define Northwest IPA prowess decades back. The Capitol Hill brewpub is a local staple, a comfortable place to kick back, and vastly superior to the brewery’s more rundown Tangletown location.

Inside 2 Beers’ SoDo tap house, things feel fun. An open kitchen serving artisan bar fare combined with televisions and pool tables make for a great afternoon spent away from the domicile. However, the Evo IPA, which measures out at 6.2 percent ABV and 90 IBU, disappointed. The beer tasted under-carbonated and flattened the vibe. Sad face.

Ninth: Lucky Envelope ENIAC at Lucky Envelope Brewing (93)
Say it ain’t so! Lucky Envelope is a young but promising brewery that, last year, created one of the best summer time options in the city, their mouth-watering Grapefruit IPA. But Lucky Envelope’s taproom felt more like a waiting room than a place to enjoy a pint. And their ENIAC IPA, listed at 7.1 percent ABV and 68 IBU, only moderately helped matters. But with youth comes new possibilities, and we hope Lucky will soon shine again.

Seattle has more beer options than it sometimes knows what to do with. New breweries pop up all over the place—from Ballard to SoDo to south Seattle. While there are so many options, they aren’t always fantastic, which might be the only negative consequence of this upswing in IPA creativity. Hopefully more breweries will learn to take the time to perfect a pint like the first four on this list clearly have, but we remain pleased to live in a place that prioritizes inventiveness and carries on the beer brewing traditions that help make civilization that much more palatable.

This Week’s Comics: The Sexy Side of Goo, Immigrants Fight Back, and Fables from the Pacific Islands