How Does Katie Herzog Live With Herself? 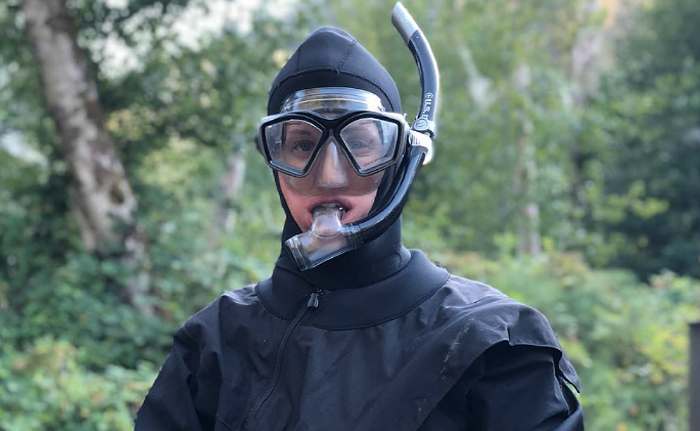 Katie Herzog, future senator of Maine. Sarah Hoffman
Katie Herzog is arguably Seattle’s most controversial contemporary editorialist—she is also a wonderfully kind person who bought me an almond croissant at Caffe Vita before our interview. I know what you’re thinking, but trust me, the deliciously sweet, flakey pastry did not affect my partiality. Within my first two weeks at The Stranger, Katie had already accused me of libeling beloved Sesame Street characters and tweet-threatened me with a fully capitalized “PREPARE TO DIE.” Naturally, I was flattered by her words. And still, despite the flattering threats and sugary sweets, all of the questions I asked were tough, verging on horrible—they’re precisely the type of questions Michael Scott asked Toby during Toby’s exit interview on The Office.

Whether you love her, or you’re one of her haters, you’ve probably wondered at least once, “How the fuck does she live with herself?” Well, people, without further ado, let’s fucking find out.

Michael Bell: Just who do you think you are?

Katie Herzog: Who do I think I am? That’s a good question. Well, I think that I’m a 35-year-old, North Carolina native, who enjoys mushroom hunting, and public radio. Those are the only two things—and weed, I like weed, too.

MB: Those seem like pretty human things to enjoy.

KH: I do think that I am human. I mean, I think there have been rumors otherwise, but as far as I know... I have seen my birth certificate—although I was born in a parking lot of a Mexican restaurant. That’s the family rumor at least. So, who knows really?

MB: Have you not inquired into that more?

KH: Well, my father has told me that my mom—she went into labor quickly apparently, and I’m a twin. I was the first twin. They were driving to the hospital and I started to come out. My dad pulled over and smushed my head back into my mom, and I have sort of a flat head now.

MB: He smushed you back? Up inside?

KH: Yes. So, I have a handprint on the back of my head—hit my soft spot.

MB: Let’s move on to the second question. How do you sleep at night?

KH: Typically, I wake up once or twice. I have sort of a hurt shoulder, and so I’ve been waking up more than once, but I’ve also been taking muscle relaxers, which really helps, so, I sleep well at night. Oh, and how do I fall asleep at night? I generally put on podcasts.

KH: There’s one that I really like, called Everything is Alive, and its interviews are with inanimate objects. It’s funny, and kind of sleepy. But sometimes I’ll fall asleep listening to the BBC, and I’ll have dreams about what’s happening in the world, and you do not wake up rested when you’re having dreams about Donald Trump.

KH: Although I did recently have a dream that I drowned him in a bathtub.

MB: Oh yeah, I read about that dream.

KH: It was a good dream.

MB: Does your partner enjoy having your podcasts playing before bed?

KH: Oh yeah, she sleeps really well. She’s a better sleeper than I am. I don’t think she’s ever fallen asleep after I have. I anticipate having sleep problems when I’m older.

MB: You anticipate having sleep problems when you’re older?

KH: My dad has sleep problems, and he also listens to the BBC all night. He sleeps with a pillow over his head, which I do, and that’s how I know genetics are real. And my mom has forever slept with a handkerchief around her head, and my sister does that.

MB: The vision of your parents falling asleep is terrifying. Do you like Harry Potter?

MB: Ok, now I can move onto my next question—do you really like Harry Potter?

MB: Ok. That’s all I need to know—next question. Where do you get off?

MB: Is that the extent of your response?

MB: I’ve only got one more—no, I’ve got two more good questions. Who gave you the right?

MB: There are no higher powers? Above Dan?

KH: There are no higher powers above Dan, except for Tim.

KH: I don’t think she’s started being the higher power yet. But Tim gave me the right, ultimately, because he hired me.

MB: That’s true. Once you get the right—

MB: Alright, last question. How do you live with yourself?

KH: I breathe in and out. I try to eat moderately well. I drink enough water. I drink a lot of Yerba Mate.

KH: I find that smoking copious amounts of marijuana is helpful for living with yourself. Oh, and turning the notifications off of Twitter.