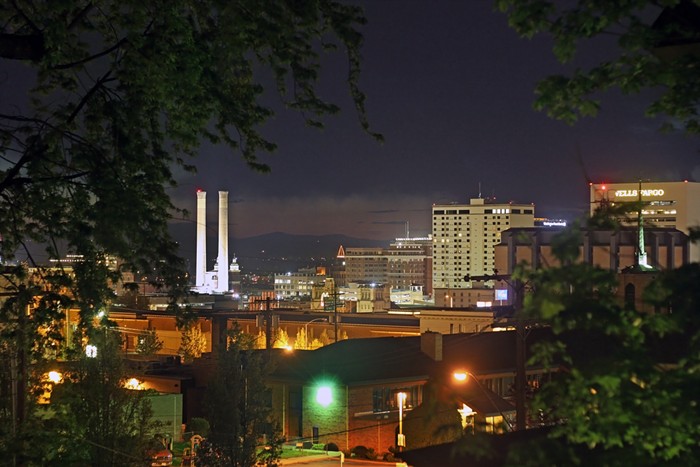 To influence a low-turnout election in the small city of Spokane, certain Google political ads were shown more than 6 million times. crisserbug / Getty Images
More than six months ago, the small city of Spokane, Washington held a humdrum special election. It was February, not the normal time for voting, so turnout was predictably low with fewer than 40,000 people casting ballots out of a total Spokane population of around 220,000. When the vote-counting was done, money for schools and maintenance had been approved. So had a local property tax increase to pay for hiring more police and firefighters.

But beneath these routine civic developments in one eastern Washington community was a massive deployment of "dark" digital ads, purchased from Google and targeted to make absolutely sure that Spokane residents would, in fact, raise their own taxes to place more first responders on the payroll at the local police and fire departments by approving Spokane Proposition 1.

In the two weeks leading up to Spokane's February 12 special election, Google ads for Prop 1 were displayed "approximately 6,200,000 times," according to data Google recently revealed to Washington state investigators.

Despite a supposed ban on Google ads targeting local elections in Washington state, these Google political ads were sold to Spokane's pro-Prop 1 campaign by Google for $4,665. Their target: Spokane residents "over the age of 45" and "whose ages were unknown."

The decision to target older voters was a shrewd one, given that older people tend to be the ones who actually cast ballots in oddly timed special elections.

This massive digital barrage transformed Spokane's sleepy February special election into something unique: an opportunity to explore the vast reach of digital "dark" ads, and how they're being deployed not just in high-profile national races, but also in small local elections—where they have the potential to be even more powerful-per-dollar-spent than they are in closely watched presidential and congressional contests.

In Washington state, where both Google and Facebook supposedly ban local political ads but have been selling them anyway, being able to run such ads when your opponent won't (or can't) only amplifies their relative power.

Although the Spokane ads should never have been sold in the first place, according to Google's own policies, the fact that they did run triggers significant disclosure obligations under Washington state's unique election laws.

When it comes to online political ads targeting this state's elections, state law says that "any person" should be able to "promptly" find out what the ads looked like, the total number of times they were shown, how they were targeted, and more.

Experts in election integrity have long argued that "dark" political ads need to be daylighted in order for democracy to function properly.

While old-school political ads delivered over local television and radio stations reach a mass audience, thereby making it easy for fact-checkers and concerned citizens to spot false and misleading spots and then sound the alarm, and while traditional newspaper ads and direct mail pieces leave a literal paper trail, targeted digital ads appear on the screens of their intended audience (an audience that can be as small or as large as the purchaser desires) and then disappear, often with no one outside the target group aware they ever existed.

And while the Google ads supporting Spokane's Prop 1 were designed so that they contained the required small-print disclosures about who purchased them—a Spokane group calling itself "Yes for Public Safety"—that doesn't tell voters all the information that state law entitles them to know about the "person or persons actually paying for the advertising."

In June, the commission opened a formal investigation into the matter and in late July it sent me some data on the Spokane ads that it said it had received from Google as part of its investigation (which is still ongoing).

It's worth noting that this is not the way Washington law says such disclosures are supposed to work. The law specifically states that political ad-sellers such as Google must give the data to the person who requests it, "without reference to, or permission from, the PDC."

Still, the Google data the PDC has shared with me offers some important insight into the scale and strategy of the Spokane ads, as well as an indication of just how powerful a force online ad purchases could be in local elections.

A Warning for Future Elections

But what the Spokane ads clearly offer is a warning that local elections are just as vulnerable to the influence of "dark" digital ads as federal elections—and likely more vulnerable because of their small numbers of voters and the low cost of targeting those voters online.

With both Google and Facebook still selling online political ads targeting Washington state's elections—and still failing to disclose required data about those ads, as highlighted by a recent citizen complaint regarding ads aimed at Seattle's city council elections—the ongoing potential for digital monkey-wrenching in this state is considerable.

What Will Regulators Do?

Beyond the questions arising from repeated failures by Facebook and Google to enforce their own local ad bans in Washington, a major unanswered question is what state regulators are going to do about all this.

In December, after Ferguson allowed the tech giants to pay $455,000 to settle his lawsuits without any admissions of guilt, Ferguson said he believed Facebook and Google would begin following Washington law.

When those PDC investigations conclude, they could result in fines against Facebook and Google, a second referral to Attorney General Ferguson for potential prosecution of the tech giants, or, if the companies can reach an agreement with the PDC, some sort of less punitive resolution.

Sponsored by: Feminist Karate Union
We are offering VIRTUAL CLASSES! Classes are streamed live and the recordings posted on our website.
The Stranger depends on your continuing support to provide articles like this one. In return, we pledge our ongoing commitment to truthful, progressive journalism and serving our community. So if you’re able, please consider a small recurring contribution. Thank you—you are appreciated!
CONTRIBUTE NOW

Get Ready for Mainstream Seattle to Blame Progressives for Boeing's Departure