The Contradictions of Judy Garland 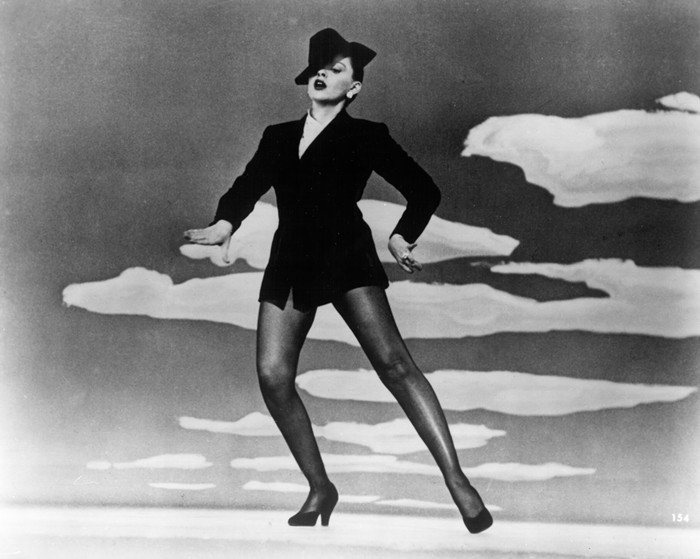 We'll talk a lot about Judy Garland this fall. Today, Garland's biopic Judy opens in theaters, with Renée Zellweger at the helm as the great Good Judy herself. It's based on the Broadway music-filled drama End of the Rainbow. I saw the opening night of that play's pre-Broadway run at the Guthrie Theater in 2012, and it was the most moving play I'd ever seen. No hyperbole, I think Garland's ghost lived through actress Tracie Bennett. I wish she was starring in Judy.

Unfortunately, reviews of Judy are mixed, but Zellweger's portrayal of Garland is getting a mostly positive reception. (Although the San Diego Reader asks, "Did they have to let her sing?")

Personally I need, at the very least, a three-year moratorium on biopics after Bohemian Rhapsody, but, as a card-carrying member of the American Homosexualist Society, I'm a longtime devotee of Ms. Garland and happy to indulge this retrospective. ("Good Judy" is tattooed on my wrist.) While I can't recommend Judy (at least not yet), there are two other Judy-related films I'd like to recommend.

First, Showtime's excellent upcoming documentary Sid & Judy, which focuses on the relationship between Garland and Sid Luft, her third husband (of five). The doc is a cavalcade of valuable archival footage and features zero talking heads, which I love. The Seattle Queer Film Festival (SQFF) will screen it on Oct. 10 as their Opening Night Gala film, and Showtime will premiere it on Friday, Oct. 18. We'll have more on SQFF and Sid & Judy in the next print issue of The Stranger.

Second, my Unstreamable recommendation: Judy Garland in Concert from The Judy Garland Show. Remarkably, Garland's live concerts and shows aren't streamable, which is a shame considering they're near-perfect examples of the late-career Garland that Zellweger's Judy, which focuses on the year before Garland's death, is attempting to portray. Her crooning on these tapes exhibits the contradictory quality that's defined Garland: charismatic, but haunting; fragile, yet steely. Garland had the unique ability to exude upbeat American optimism alongside a deep, unexplainable, vulnerable sadness. It's a quality every actor since Garland has tried to achieve, and why her specter will keep haunting Hollywood. CHASE BURNS

I need a skintight latex suit STAT! Jasmyne Keimig
In the Olivier Assayas-directed Irma Vep, Maggie Cheung plays a version of herself, brought onto a frenzied and emotional Paris film set. Despite speaking no French, she's set to be the star of aging New Wave-era director René's (Jean-Pierre Léaud) remake of the 1915 silent serial, Les Vampires. As the titular cat burglar in a catsuit, Irma Vep, no less. All the while, certain crew members are completely confounded as to why the increasingly erratic director would hire the Hong Kong actress to star in the movie that’s falling further behind in schedule and quality.

Constructed as a critique of the French film industry at the time, Cheung is a foreigner caught in the middle of her European colleagues’ antics. She often finds herself in the middle of petty, gossipy squabbles between the French crew members who spread lies about one another or lambast each other's lack of professionalism. Or, in one scene, Cheung defends French cinema to a French journalist who believes French film is too intellectual and prone to navel-gazing, instead preferring masculine Hollywood flicks. To all these cultural debates, the actress politely listens, nods, smiles, and moves on with her work. You come to understand that the film industry in France is having a crisis of identity and purpose at the end of the century, sorting out its own soul.

While films-within-films can be a worn-out trope, Irma Vep is a delightfully frenetic movie that takes its cues from jumpy, behind-the-scenes documentaries. At turns hilarious and thoughtful, Cheung is its center—curious, good-natured, beautiful, emotive. Look out for the iconic Léaud taking comically small swigs out of a 2L plastic bottle of Coca Cola between takes and also the final scenes of the movie, which consist of the wonderous rough cut of René’s film. JASMYNE KEIMIG

This shit is weird. CB
"Abanga-do" is the Japanese loan word for "avant-garde," but it's used more broadly than we use "avant-garde" in the States. Something just generally kooky or weird can be abanga-do.

Bobobo-bo Bo-bobo is about as abanga-do as a kid's anime can get, and it makes as much sense as its name. It feels like a lot of things: Adventure Time. Dadaism. It takes that Betty Boop-personification gag that animator Max Fleischer was so good at—where inanimate objects or body parts suddenly get facial features and talk for no reason—and puts it into overdrive. In Bobobo-bo, nose hairs become weapons. Tonsils sing. Atomic bombs have sexy human legs and wear lipstick.

Orlando-based Discotek Media is bringing Bobobo-bo to Blu-Ray in the US for the first time this December—just like it's doing with last week's Unstreamable recommendation, Medabots. Early 2000s anime is making a comeback. CHASE BURNS


Never before have I wanted to etch the images of a film inside my eyeballs to play privately for me whenever I wanted before watching Beau Travail. It's gorgeous and strange and made purely of dreams. Set in Djibouti and based off Herman Melville's Billy Budd, the story is told in an extended first-person flashback, narrated by ex-sergeant Galoup (Denis Lavant) after he's kicked out of the Legion for cruel mistreatment of the charismatic and promising new recruit Gilles Sentain (Grégoire Colin). While it's sort of vague why he disliked Sentain so much—ostensibly because the boss took a liking to the young man—Galoup's jealousy borders on obsessive. To me, all obsessions have a fetishistic or erotic quality to them and Sentain was likely an unspoken locus of desire for the sergeant.

Beau Travail has very little dialogue save for Galoup's narration, instead favoring image over the spoken word. The soldiers do improbable workouts (in one scene, they violently hug each other repeatedly) in improbable places (on the craggy and volcanic ocean shore), but there's a sense of deep intimacy to it all. It's like they take the word "corps" seriously—the men move as if they are one body, one mind, one spirit. Shaving, ironing, dancing together. As soon as the DVD stopped playing, I started watching it again, not sure I'd taken it all in—the film lends itself easily to multiple viewings. Make sure to watch to the very, very end to witness one of the most heartbreaking dances I've seen! JASMYNE KEIMIG