The Winner of the LGBTQ Town Hall? Donald Trump. 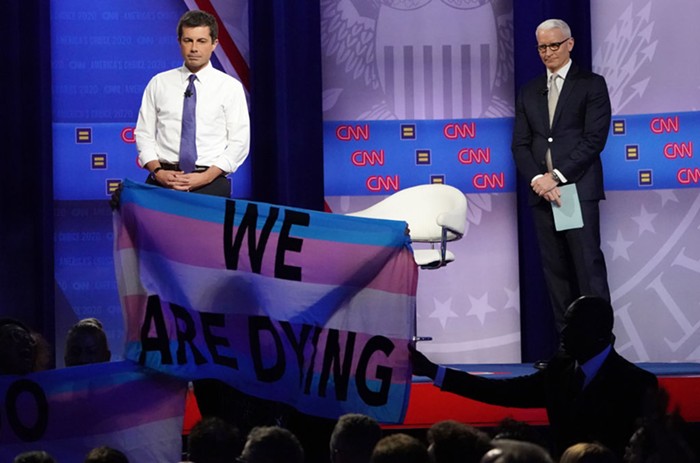 Protesters interrupting the one gay candidate at the CNN LGBTQ town hall. Mario Tama/Getty Images
Despite my multiple and very serious arguments against it, eight of the top Democratic candidates for President plus Tom Steyer took part in the first-ever LGBTQ town hall on Thursday night on CNN.

It was four and a half extremely long hours. Aside from taking a short break during Amy Klobuchar’s segment to whip myself with a metal whisk and pray to the ancient God Sotos to turn me straight, I watched every goddamn minute, and I am surprised to report that there were fewer obvious gaffes than I expected. No one, as far as I could tell, accidentally called trans men “trans females,” as Julian Castro did at an early debate, and Joe Biden only tried to kiss Anderson Cooper once.

The liveliest moments of the night came not from the candidates but from activists in the audience, who staged two major interruptions: The first was during the one gay candidate’s moment on stage, when a question for Mayor Pete Buttigieg was interrupted by trans activists.

The other major interruption was when a trans woman took the mic from the mother of the second trans children featured to yell about how there were no black trans people asking questions. If she had waited a few minutes, she would have seen a few, but Don Lemon handled the moment well:

A Black trans woman named Blossom expressed her anger at the @CNN #EqualityTownHall , pointing out no Black trans person has been allowed to ask a question yet. #blackTRANSlivesmatter

Other hosts were not quite a smooth as Lemon. When Kamala Harris decided to introduce herself by saying, “My pronouns are she/her/hers,” host Chris Cuomo joked back, “So are mine.” The audience did not laugh because pronouns are not a laughing matter and I could imagine the dressing-down Cuomo was about to receive backstage. Indeed, Cuomo did later apologize, although his apology reads a bit like he’s been taken hostage and fears for his life, which he should.

PLEASE READ: When Sen. Harris said her pronouns were she her and her's, I said mine too. I should not have. I apologize. I am an ally of the LGBTQ community, and I am sorry because I am committed to helping us achieve equality. Thank you for watching our townhall.
— Christopher C. Cuomo (@ChrisCuomo) October 11, 2019

The other major gaffe from a CNN host came from Nia-Malika Henderson, who, when introducing an audience member named Shea Diamond, mispronounced her name as Shea and not Shea. PLEASE WATCH this video because not watching it is literal violence.

A black trans woman said it's "violence" to misgender or alter a trans person's name after Nia Mikayla Henderson mispronounced her name at the #EqualityTownHall. pic.twitter.com/JqXQjlwsD0
— Julio Rosas (@Julio_Rosas11) October 11, 2019

While the event was called the “Equality Town Hall,” representation was not exactly equal. The vast majority of the questions concerned, and were asked by, gay men and trans women. There was one token bisexual and one token nonbinary person permitted to ask a question, but I’m not sure the word “lesbian” was uttered once. They did, thank goddess, let butch comic Julie Goldman ask Kamala Harris about the most lesbian issue of all: homeless children. But it really should have been called the CNN Gay and Trans Women of Color Town Hall since a few letters of “LGBTQ” were basically ignored.

As for the substance of the debate, the candidates were asked varying versions of five different questions: Will you make the RedCross take blood from gay men? How will you make PrEP cheaper for gay men? What are you going to do about hate crimes and the “epidemic of violence against trans women of color"? What are you going to do about trans people in the military? And, are you going to pass the Equality Act? Everyone gave basically the same answers, which are as follows: Yes; force insurance to cover it; enforce hate crime laws through the Department of Justice; welcome them; and yes. If they wanted to distinguish themselves on matters of policy, asking questions everyone agrees on was not the way to do it.

Where the candidates did manage to stand out, I’m not sure it will benefit them. As I argued before the event, an LGBTQ forum had the potential to hand ammunition to Donald Trump. And it did. Perhaps the most glaring example of this was when Jacob, the first trans child invited on stage, asked Elizabeth Warren how she would make schools safer for trans kids.

Her answer was fine: "Let me start by saying I want to have a secretary of education who both believes in public education and believes in the value of every one of our kids and is willing to enforce our civil rights laws," she said. "We've had some secretaries of education who've been better, and we've had one that's been a whole lot worse. Her name is Betsy DeVos. So, when I'm president, she'll be gone."

But more damaging than Warren promising to let children dictate her cabinet was Beto O’Rourke, who recovered nicely from a protester’s interruption but then took out his foot and started chewing on it. The low point came when Don Lemon asked the former Congressman of Texas, “Do you think religious institutions like colleges, churches, charities should lose their tax-exempt status if they oppose same-sex marriage?” O’Rourke was unequivocal: “Yes.”

“There can be no reward, no benefit, no tax break for anyone, or any institution, any organization in America that denies the full human rights and the full civil rights of every single one of us,” he added. “So as president, we’re going to make that a priority and we are going to stop those who are infringing on the rights of our fellow Americans.”

Now, I personally don’t think churches (and many other “non-profits”) should be tax-exempt, but this is not a winning position in a presidential general election. Eighty-four percent of Americans are some kind of religious, and while religions, like the rest of society, are becoming more tolerant of LGBTQ people, a whole lot of them still don’t support same-sex marriage or people. And it’s not just the Westboro Baptist Churches of the world that, in Beto’s words, “deny the full human rights” of gay/trans/etc people. The Methodists do it too, as do the vast majority of Muslim institutions. In a 2018 survey of American Muslims, the percentage who openly identified as gay or lesbian was… zero. Of course, that does not mean that gay Muslims don’t exist (they do!) or that all Muslims are homophobic (they're not!) but if Beto is talking about revoking the tax-exempt status of churches, he’s going to alienate a whole lot of devout Christians, Muslims, and the liberals who love to defend them, all for an effort that won't clearly make life better for LGBTQ people.

Of course, what other choice did Beto have? The audience was packed with people who wanted to hear the candidates affirm their lives, their identities, and their values. So when a trans activist interrupted Kamala Harris to shout, “Trans women are being systematically hunted down,” what was Harris supposed to say? “What the fuck are you talking about?” No! She couldn’t. So she said the one thing that would make her look like an ally, even if there’s absolutely no evidence to support the claim that trans woman are being systematically hunted down: “You’re right.”

This is why this forum was such a bad idea: These candidates had two options here—pander to the audience or look like a bigot. And so they chose the first option. That meant, for instance, that when multiple audience members brought up the Pulse Nightclub shooting as an example of a hate crime against gay people, instead of correcting the audience members and saying that the shooter didn’t even know Pulse was a gay club and was inspired not by homophobia but by American foreign policy and ISIS, the candidates could either tell the truth or lie and make everyone in that room happy. Of course they lied! It’s politics.

The problem is, that room is not representative of the majority of America. Yes, attitudes towards LGBTQ people have improved remarkably in recent years. But just as in 2016, the general election could very well come down to a handful of moderate districts in swing states, places where nonbinary driver’s licenses and teaching gender identity in schools (both of which candidates endorsed last night) are going to resonate a hell of a lot less than Donald Trump screaming about his record on jobs.

It’s a real problem: To garner media attention and win the primary, the candidates need to be beyond progressive on all the issues. But to win the general, they’re going to need to be a little more moderate—or at least talk less about identity and more about the issues that affect everyone in America: things like jobs, healthcare, taxes, infrastructure, and retirement.

Should that be the way it is? Maybe not, but it is the way it is, and Democrats really need to start grappling with that reality or we’re going to see a repeat of 2016: A Democrat wins the popular vote, and Donald Trump takes the Oval Office.