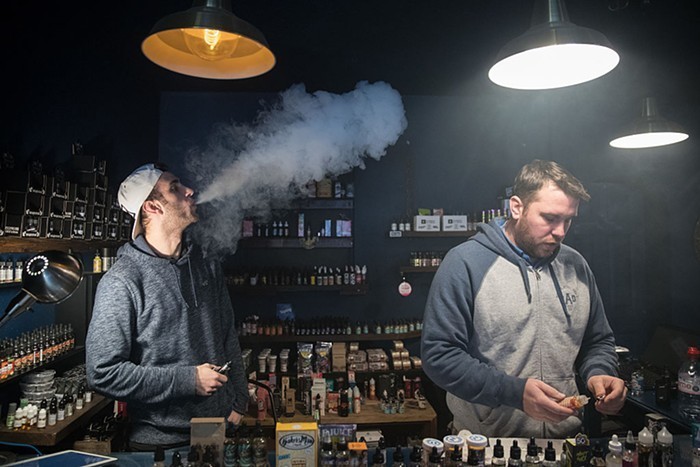 Hope there's no mango in that vape juice. MATT CARDY/GETTY IMAGE
On Thursday, public health officials confirmed more reports of vaping-related lung illnesses in Washington state, bringing the total to 23. Across the country, at least 57 people have died related to vaping, including, reportedly, one man from Washington state (although his vape was purchased in Oregon).

Today's announcement comes the same week that Gov. Jay Inslee and several state senators introduced legislation to enact a permanent ban on flavored vape products along with a slew other restrictions, such as limiting how and where these products can be marketed, requiring ingredient disclosures, and more strictly limiting the level of nicotine available per product.

So will this end vape illnesses? Probably not.

As we have reported over and over and over, there is no evidence that vaping illnesses are in any way connected to flavored vape products. According to the CDC, it's vitamin E acetate, not mango-flavored vape juice, that is making people sick. The governor's bill will ban the sale of any vapor product containing vitamin E acetate in the state (there's already a ban in effect, but it's voluntary) and while that seems like an obvious solution, the ban on flavors will also increase the likelihood that people will seek out shady black-market products.

The flavor ban isn't designed to stop vaping illnesses: it's designed to keep youth from vaping. We don't yet have numbers on how rates of teen vaping are impacted by the temporary flavor ban that went into effect in November in Washington state, but according to a recent report from KUOW, teens are (surprise) finding a way around these bans. In fact, a flavored vape black-market has sprung up, with people selling flavored products they purchase online or in other states. It's exactly what opponents of the flavor ban—including those in the industry—predicted would happen.

"I don’t believe that stopping the flavors has stopped anyone," one teenager told KUOW. "If anything, it made people go out of their way to look for more ways to get it." Now, this might seem crazy but hear me out for a second: It's almost as though banning something—whether it's drugs or sex or books or the right to vote—makes people want it more. Who would have thought??

Should this bill pass (and I expect that it will, and if it doesn't, Jay Inslee will issue an executive order with the basically the same provisions), the laws in Washington will be stricter than those nationwide: Earlier this month, the Trump administration announced a new prohibition on the sales of fruit- and candy-flavored vapor pods, but they made an exception for those sold in refillable tanks as a favor to the retail vape industry.

While Trump's ban, unlike Inslee's, does nothing to address vitamin E acetate, the end result of these flavor bans is likely the same: People will turn to black-market sources—which are more, not less, likely to contain harmful ingredients—when they can't get what they want from their neighborhood vape shops. So, in effect, all these bans do is put more people in danger. It's hard to see the public health benefits in that.