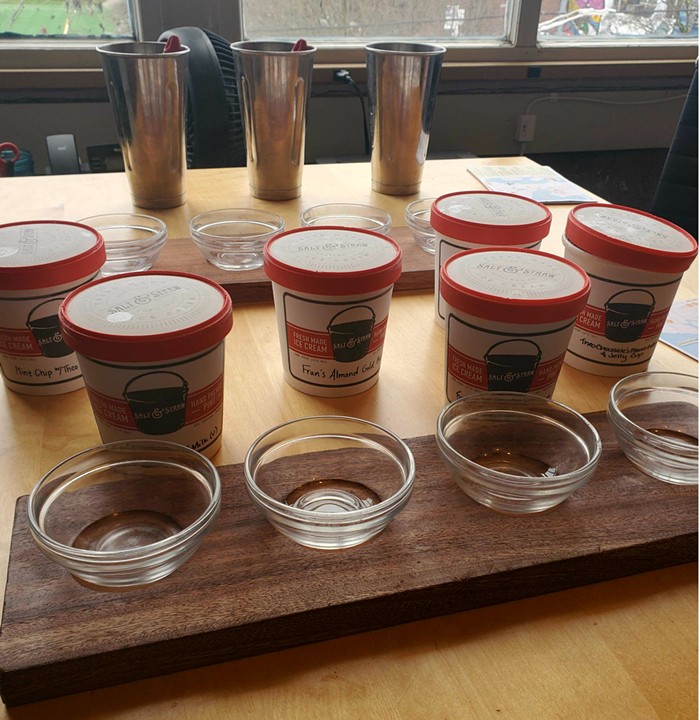 An afternoon Salt & Straw ice cream tasting. So much yum. LP
Seattleites love their sweets. And in that respect, I am in good company. Cupcakes, macarons, ice cream, cookies, fine chocolates and candy, doughnuts and Danishes, pies and custards and muffins of all varieties—you name it, you’ll find it here. There’s such a glut of places to get a sugary fix, in fact, that it is a problem for those of us watching our waistlines (and sugar intake). Even being gluten-free, I regularly go on dessert fasts, because it is far too easy to go overboard; within four or so blocks of The Stranger office alone, there are four ice cream shops (one is all plant-based, one is frozen custard), several cafes with pastry counters, a few actual bakeries, a cupcake joint, a few doughnut shops, and even a place to get vegan cinnamon rolls.
Sponsored

But in the more than three years I have lived in the Pacific Northwest, I never had a taste of Salt & Straw until last Friday.

In my defense, Salt & Straw (launched in 2011 by Portland-based cousins Kim and Tyler Malek) moved into Washington only two years ago, with the Capitol Hill location opening February 16, 2018. Of course, this location is only five blocks from The Stranger, so maybe I don’t really have an excuse.

People love Salt & Straw so much, they have it shipped to wherever they might be in the United States that does not have Salt & Straws, which is many, many places; you can find them only in Oregon (four locations in Portland, where it was born), California (Anaheim, San Diego, and San Francisco), and Washington (two locations in the Seattle area, with a third opening in Kirkland this spring—they tell me June). But despite their expansion into non-Portland markets, they keep their shit hyper local to the areas they serve, and because they offer small-batch handmade ice cream, flavors vary depending on the season and ingredient availability in those areas. (If you want to read more about their story, mission, and inspirations, which are pretty cool and impressive for a handmade ice cream shop, go here.)

Anyway, the point of this post is that it’s February, the month of Salt & Straw’s Chocolatier Series, during which they serve flavors resulting from their collabs with regional chocolatiers and chocolate makers, and they brought all five of these limited flavors to The Stranger for me and my colleagues to taste on that fateful aforementioned Friday.

It was my favorite lunch, ever. It was also the most hopped-up I have ever been at work.

Fran's Almond Gold Bar.Courtesy Salt & Straw
The first ice cream we tried was Fran's Almond Gold Bar. According to the write-up, Salt & Straw combines Fran’s almond candy bars with "our version of an ice cream her friends used to make her in the ’80s. Think salted vanilla ice cream with generous drizzles of caramel and specks of chocolate." This was an early hands-down favorite; most of the people who tried it made the same blissful face after the first bite. "My mom drives all the way from the Eastside to Salt & Straw during February just to buy the Frans flavor," one staffer told me. That's some love right there. At least mom won't have to do that for long, in light of the Kirkland location that's opening over that way soon.

Forte's White Chocolate Lemon Pepper takes Forte's signature lemon and black pepper bar, and mixes chips of it into an ice cream rooted in the same flavors. It was bright and fruity without being tangy. ("It's lit," one staffer commented.)

Theo Chocolate's Peanut Butter & Jelly Cup found the organic- and fair-trade-certified chocolate maker's dark chocolate peanut butter cups mixed into a chocolate peanut butter ice cream with a raspberry jam swirl. The PB&J flavor is strong on this one, perhaps too strong? It was definitely tasty, but one staffer pointed out that you could barely taste the chocolate, because it was overwhelmed by the peanut butter flavor, and she wasn't wrong. I was most excited about this one (I still eat PB&Js on the reg), but it was a bit too rich for even me.

Fresco's Dark Chocolate Oat Milk (vegan) is a plant-based ice cream. According to the press materials, former engineer/current chocolate maker Rob Anderson "tested all kinds of roasts, conches, and sugar levels to determine the best parameters for the single-origin Dominican Republic Oko Caribe he chose for this flavor." It combines 100 percent chocolate with oat milk, sugar, and salt. Even without any dairy to speak of, it felt luxurious and silky.

Finally, there was Intrigue's Coffee Chocolate & Salted Fluff. Intrigue Chocolate is run by "farmer-turned-botanist-turned-brewer-turned-baker" Aaron Barthel, whose artisanal, small-batch chocolates are simply divine and not at all traditional. This ice cream, the other front-runner of the Chocolatier flavors that we tried, features chunks of their coffee chocolate in a very subtle and airy mocha latte ice cream with dollops of lightly salted marshmallow fluff. It was both decadent and light, and it is the flavor that will be luring me back to Salt & Straw to try again. Maybe tomorrow. See you there.

Watch SLAY, Our Horror Film Fest Online THIS WEEKEND (Or In-Person on Oct 29-30)!

I, Anonymous: NOT OK, BOOMER!