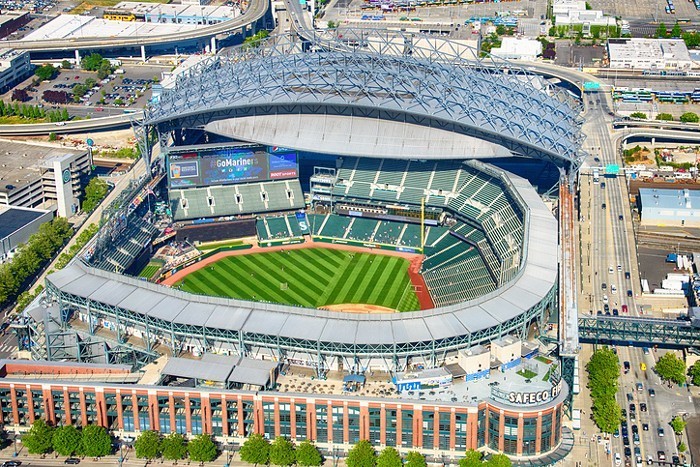 Stadiums will close until further notice. ART WAGER/GETTY IMAGES
Puget Sound's professional sports organizations are quickly responding to Governor Jay Inslee's announcement on Wednesday, March 11, that all gatherings of more than 250 people will be prohibited in King, Pierce, and Snohomish Counties for the remainder of March in response to the ongoing coronavirus crisis, which has infected a confirmed 267 in Washington State, including 24 dead. Here's what we know so far:

• The Mariners are working on rescheduling all home games through the end of March and will provide more information as it becomes available.

• The Tacoma Defiance soccer team announced that Wednesday's game against the San Diego Loyals will go on but will be closed to the public. (It will be broadcast on ESPN+). The next scheduled home game, against Oklahoma City on March 22, will be rescheduled.

• The Sounders FC will be postponing a home game against FC Dallas at CenturyLink Field on March 21.

• The Seattle Dragons, the new XFL team, will play on March 15 at CenturyLink Field, but the stadium will be closed to fans. It will be broadcast on ESPN2.

• The Tacoma Rainiers baseball season is scheduled to begin with a home game on April 9. It is unknown if that game will be impacted at this time, but according to a statement by Rainiers president Aaron Artman, "Our hope is to play our entire Rainiers home season as scheduled and we are excited to open the gates to Cheney Stadium without health concerns as soon as possible."

If you have purchased tickets to any of these games, check the organization's website for details on refunds. For updates on this ongoing crisis, check here.