Jas Keimig
Every weekday during March, Women's History Month, we'll be writing about a great film directed by a woman. Although our list won't be comprehensive, we hope to shed some light on work that often gets overlooked by mainstream audiences and awards.
BEAU TRAVAIL
France, 1999, 92 mins, Dir. Claire Denis 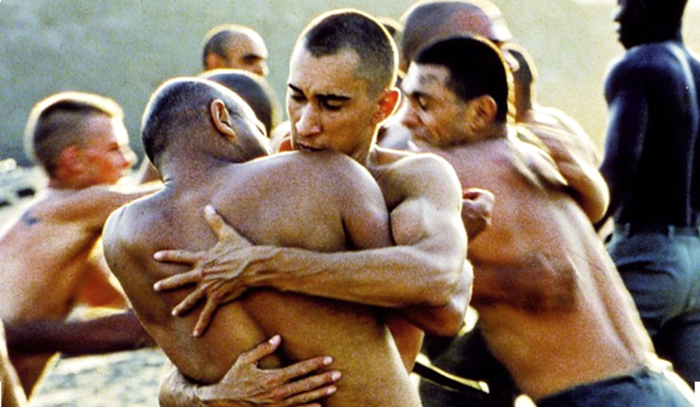 Beau travail features a lot of scenes of half-naked men gripping each other. Courtesy of New Yorker Films
Never before have I wanted to etch the images of a film inside my eyeballs to play privately for me whenever I wanted before watching Beau travail. It's gorgeous and strange and made purely of dreams. Set in Djibouti and based off Herman Melville's Billy Budd, the story is told in an extended first-person flashback, narrated by ex-sergeant Galoup (Denis Lavant) after he's kicked out of the French Legion for cruel mistreatment of the charismatic and promising new recruit Gilles Sentain (Grégoire Colin). While it's sort of vague why he disliked Sentain so much—ostensibly because the boss took a liking to the young man—Galoup's jealousy borders on obsessive. To me, all obsessions have a fetishistic or erotic quality to them and Sentain was likely a locus of unspoken desire for the sergeant.

Beau travail has very little dialogue save for Galoup's narration, instead favoring image over the spoken word. As viewers, story and emotion are revealed to us not as much through exposition, but in glances and snarled mouths. It's fun watching the soldiers do improbable workouts (in one scene, they violently hug each other repeatedly) in improbable places (on the craggy and volcanic ocean shore), but there's a sense of deep intimacy to it all. It's like they take the word "corps" seriously—the men move as if they are one body. Shaving, ironing, dancing together. There's a fascination with the beauty of men's bodies in relation to one another in both their softness and hardness thrown against their ocean-swept setting. Make sure to watch to the very, very end to witness one of the most heartbreaking dances I've seen. Beau travail is Denis at her best.

Available for rental on DVD at the Seattle Public Library and Scarecrow Video.