Facing temporary closure in the near-term and a tremendous amount of uncertainty in the long-term, Pacific Northwest Ballet performed a dress rehearsal of Alejandro Cerrudo's One Thousand Pieces and David Dawson's Empire Noir, both shows from two choreographers I've heaped plenty of praise upon in the past.

To preserve some memory of the show, and to continue connecting with audiences under quarantine, PNB planned to film the performance and then send out a private video to ticket-holders. (That video is now live, as of Tuesday, but it will evaporate Sunday at 2:00 p.m.)

But that night last week, a few other arts journalists and I—plus a couple handfuls of ballet students—were invited to see the show on the condition that we not review the performances, which follows the industry standard of not reviewing dress rehearsals.

Though I didn't even know if I'd even have a place to post my non-review the next day, I went anyway.

Cerrudo's ballet was visually inspired by Marc Chagall's America Windows, it was set to a Philip Glass playlist full of pieces I love more than tongue can tell, and it featured dancers spinning in waterfalls of mist. Those are three of my favorite things all in one thing, so the show felt like private programming. I'd seen Empire Noir before, and I wanted to see it again. But I didn't just go to exploit for—perhaps!—the last time the perceived perk of my job.

The week before the show I'd watched the PNB dancers rehearse with Cerrudo and other stagers. Dancers told me the repertoire was pretty grueling, especially for those with roles in both shows. Dawson's show requires an insane amount of athleticism, and Cerrudo's One Thousand Pieces appears to have thousands of steps. In an interview after one rehearsal, even Cerrudo admitted that the show is "a little bit busy, too busy at times."

The idea that these dancers would work so hard to get such a complex piece so right, and then only perform for a camera and a sea of empty chairs gutted me. The cliche about live performances, which I'm forced to repeat here, is true. Though Slogs last forever, and though the video of the performance will preserve something, the power of live dance lies in its impermanence. No video can really capture the experience of Noelani Pantastico turning into a water sprite onstage, or Miles Pertl in hat and tails suddenly descending from the top of the proscenium arch like the evening's butler, or watching the whole company transform into a moody ocean. Without an audience, all that stuff just dissolves, and rejecting the opportunity to honor that work seemed like an insult to all the gods at once, let alone human decency.

Before the curtain went up, the other journalists and I were getting used to the new social distancing measures. We all sat a safe distance apart. One of them disinfected my armrests for me. We expressed our concerns and anxieties about what the pandemic would do to Seattle's art scene. We speculated about who would survive and who wouldn't—including ourselves. Privately, I saw a big house populated with a couple journalists and some ballet students and wondered if this didn't prefigure the future of the major arts. Once the Boomers and the retirees with yearlong subscriptions pass away, will there be any audience left for ballet? For the theater? For opera?

Then the lights went down and the orchestra struck up. The curtain raised on a line of dancers standing across the stage with their palms touching. After having just freaked out about possibly touching a doorknob 20 minutes before this moment, watching these artists embrace each other without fear was shocking and illicit and somehow comforting all at once. Who knows when we'll get to see that level of connection onstage or in life in Seattle again?

For the next two hours I was a disgusting ball of tears. We underestimate the real social benefit of providing a big dark room where it's perfectly acceptable to cry in public, which is yet another reason we need to fight to keep these arts institutions, big and small, alive.

Though I can't describe every gorgeous move every dancer made, I can say that ticket-holders for that show are lucky they get to see the ballet on video. And if you want to help bring this Cerrudo/Dawson program back, you can donate to that cause here. 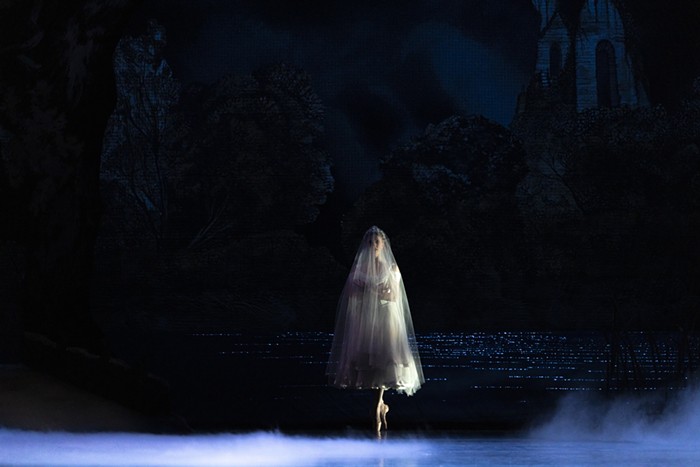