Facebook Is Deleting Lockdown Protest Events. No, That Doesn't Violate the Constitution. 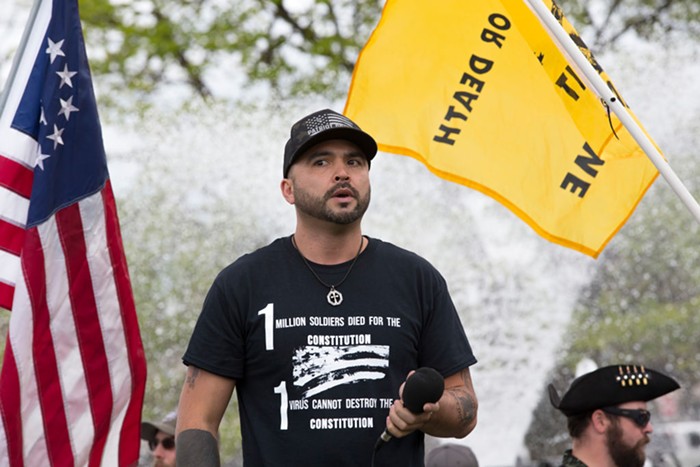 Patriot Prayer founder Joey Gibson at Sunday's "Defend the Constitution" rally in Olympia. Karen Ducey / Getty Images
Yesterday, Facebook made clear it will no longer allow its platform to be used for promoting "events that defy government’s guidance on social distancing."

So The Stranger asked whether Sunday's anti-lockdown protest in Washington state, which was organized on Facebook, defied government guidance on social distancing.

Facebook then looked into the matter and, by the end of the day, e-mailed The Stranger to say that "several" events promoted by a Facebook page that organized Sunday's rally—Liberty, At All Hazards—"do violate" Facebook policy and as a result "have been removed."

In California, New Jersey, and Nebraska, the company has likewise taken steps to block efforts at using Facebook to organize anti-lockdown protests. The moves come in the wake of reporting that showed some early lockdown protests were "being engineered by a network of conservative activists" using Facebook groups.

Are these new actions by Facebook, as Donald Trump Jr. argues, an example of "Facebook colluding with state governments to quash peoples free speech"?

Is Republican Senator Josh Hawley of Missouri correct to suggest that "free speech is now illegal in America"?

Let's begin with an answer from Washington state conservative Tyler Miller, who runs the "Liberty, At All Hazards" Facebook page and sits on the board of the Kitsap County Republican Party.

In a phone interview yesterday, Miller did complain that Facebook had seemingly "invented" its new policy on the spur of the moment. But he also stated a firm belief, common among certain American conservatives, in the right of private companies to manage their own affairs.

"I think that private business should be able to regulate itself all it wants to," Miller said.

Therefore, Miller argued, Facebook, as a private company, has a right to craft its own policies and enforce them.

Further, Miller said that Facebook is correct to view his page's promoted events as being in the "defy government's guidance" category. “I think Facebook’s right," Miller told The Stranger, "about how they are interpreting their own policy."

Shortly after that interview, Miller went on Facebook and recorded a video in which he noted he'd just been interviewed by The Stranger ("You know how they are," he told viewers). In this video, he sought to emphasize a point closer to the Trump Jr. line.

If Facebook is "acting as an agent or an arm of the state," Miller argued, "then you better believe that it violates my rights.”

He promised: "We’re gonna look at it." He also suggested he might sue.

Miller added that he's presently "in self-quarantine for the next two weeks" because of Sunday's protests. ("Not because I think I was exposed, but because I have been asked to by my employment. And I am responding to that request, and I am at home.”) He appeared to be speaking from his outdoor deck, a dog occasionally barking in the background.

Toward the end of the video, he said he was "getting very angry eyes from my wife through the window," and at one point in the 30-minute address he coughed repeatedly.

"Excuse me," he told viewers. "For those of you who know, I have a chronic cough… I don't have the COVID."

In response to the "arm of the state" line of criticism lodged by Miller, Trump Jr., and others, Facebook has explained that it's been talking to state officials "to understand the scope of their orders, not about removing specific protests on Facebook."

State leaders, in turn, have made clear they're not asking or telling Facebook to do anything in particular about event posts. And the office of Governor Inslee, for its part, merely said it "would politely suggest" that Facebook enforce its own policies in the wake of Sunday's protest in Olympia.

Lisa M. Manheim, a professor at the University of Washington School of Law with expertise in the First Amendment's freedom of speech protections, said that those who believe they have broad "free speech" rights on Facebook's platform are mistaken.

"The First Amendment restricts what the government can do," Professor Manheim said. "It does not restrict what a private company can do."

Professor Manheim said she has "no reason to think" that Trump Jr.'s assertions about Facebook "colluding" with the government to suppress speech are based in fact.

So if Facebook is indeed a private company acting of its own volition with these new policies, Professor Manheim said, "Facebook can take certain steps—e.g., restricting certain forms of speech and nevertheless remaining in compliance with the First Amendment—that a government would not be able to."

The widespread confusion around this issue, whether genuine or intentionally stoked, is understandable.

After all, even Facebook CEO Mark Zuckerberg has been accused of publicly conflating free speech concepts for his own benefit, oversimplifying questions about online speech rights, and being part of an industry that cynically "tortures the concept of free speech until it screams for mercy."

Miller, in his video, went on to deride "King Inslee" for his social distancing rules—which are supported by a huge majority of Washingtonians—and expressed pride at all the media attention his efforts have been getting since Sunday's protest in Olympia. "We are the biggest protest so far in the nation," he claimed.

He also made clear, repeatedly, that for him the Constitution is a means to a particular end: getting people back on the job.