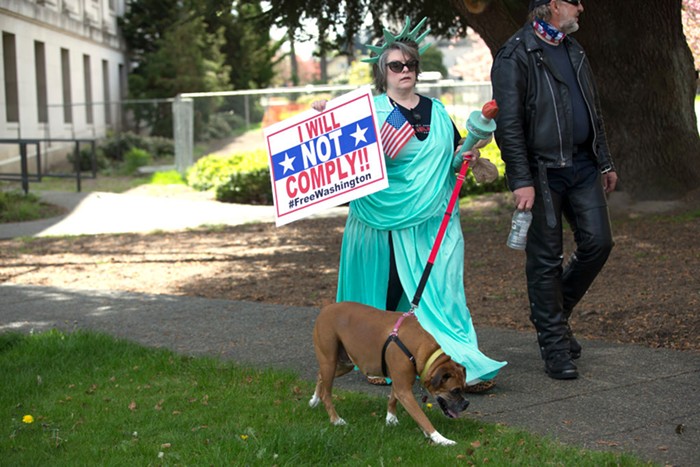 A protester at Sunday's anti-lockdown rally in Olympia. Similar protests are being promoted for this afternoon in Spokane. Karen Ducey / Getty Images
On Monday, a Republican who organized the recent protest in Olympia against Governor Jay Inslee's "Stay Home, Stay Healthy" order released a 30-minute Facebook video in which, among many other things, he encouraged his followers to shift their focus and begin resisting "King Inslee" at the local and county levels.

Today, the elected sheriff of Snohomish County, Adam Fortney, said on Facebook that he "will not be enforcing" Inslee's order.

Fortney, too, called for pressuring local leaders to act in defiance of the governor's strategy for slowing the deadly spread of COVID-19. (A strategy that has overwhelming support from Washingtonians, according to a recent poll.)

"It’s unfortunate when elected officials promote illegal activity that puts their community’s well-being at risk," Inslee spokesperson Mike Faulk said in response to a question about Sheriff Fortney's actions. "That kind of leadership can only lead to more people getting sick, more rumor and more insecurity, and with the end result being a protracted crisis we must continue to mitigate."

That statement presumably applies to elected officials in southeastern Washington's Franklin County, too. They recently voted to re-open the county in violation of Inslee's order.

In addition, Republican candidate for governor Tim Eyman is encouraging people to show up at two protests against Inslee's "Stay Home, Stay Healthy" order that are set for this afternoon in Spokane.

Both protests are being organized on Facebook, although Facebook says it prohibits the use of its platform for organizing "events that defy government’s guidance on social distancing."

Asked about the Spokane protests that are being planned on Facebook, Faulk, the Inslee spokesperson, said: "Gatherings are banned under the order, so yes these events if they take place could foreseeably violate the order. Of course, the worst part for everyone is that these gatherings put the public health at risk."

Facebook spokesperson Andy Stone said the company is looking into the Spokane events.

One of them, "Let Us Fish," doesn't say anything on its Facebook event page about how protest attendees should conduct themselves, other than: "Bring your signs and fishing poles. Better yet, attach the signs to the fishing poles."

The other protest, described on Facebook as an "Open for Business RALLY," says: "We encourage all to practice safe distancing. Our plan is for the people in vehicles to go ahead and follow the leading vehicles on Spokane falls Blvd and drive around downtown for three passes and return back to the City Hall to RALLY!"

Reporting from The Washington Post continues to show that these protests and calls for reopening states are not entirely organic, and that Facebook is presently being used by "a wide-ranging and well-financed conservative campaign to undermine restrictions that medical experts say are necessary to contain the coronavirus."

Inslee is scheduled to hold a press conference today at 2:30. The subject: "COVID-19."

UPDATE, 2pm: Facebook determined that both Spokane protest events violate the company’s policy. As a result, said spokesperson Andy Stone, they “have been removed.”