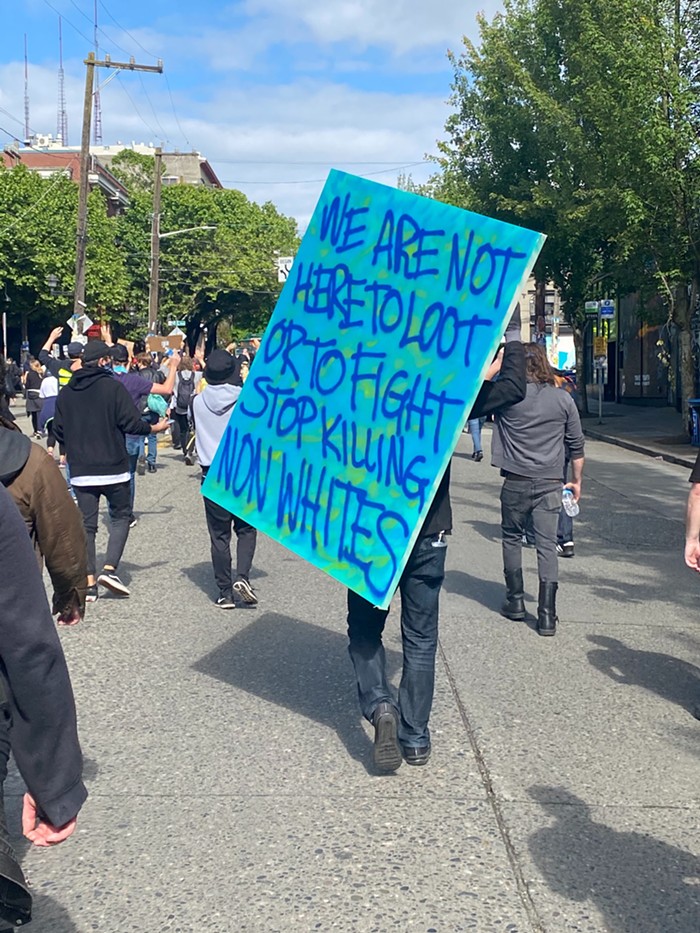 A sign from Sunday's peaceful march in Seattle. Chase Burns
Inslee just announced he's extending the statewide eviction moratorium: He made the announcement during a presser on tonight's fourth night of police brutality protests. More from The Stranger's Rich Smith:
Sponsored

As for his position on the protests: Until a reporter for the South Seattle Emerald asked him to, Inslee didn't address multiple accounts of violent police behavior captured on video over the weekend. The Seattle Office of Police Accountability counted "approximately 12,000 individual complaints" involving officer conduct over the weekend, including incidents where cops apparently used knee-to-neck holds, pepper-sprayed young children, allegedly instigated arrests, and tossed flash bangs and tear gas into crowds of the peaceful protestors executive officials have made such a point of praising. And even after the reporter raised the question, Inslee only offered the standard, bloodless reply other executives have offered: he's sure there will be a "thorough investigation." According to SPD, 82 people were arrested for events related to the weekend's protests.

Trump also told governors they need to get "much tougher" in a phone call this afternoon. “You have to arrest people and you have to try people. And they need to go to jail for what they’ve done,” he said. Listen to his unhinged rant, obtained by the Daily Beast, here.

Seattle announced another curfew: This one will be from 6 p.m. to 5 a.m. So, right now. There are transit disruptions. In a press release, the ACLU of Washington's executive director Michele Storms called the curfews across Washington "chilling" and said "they open the door to selective enforcement, potentially magnifying the very harms that protestors and communities have been demanding be addressed for decades."

Here's an earlier livestream from KOMO's chopper: The protest has moved up Pine and protestors are currently demanding a meeting with Durkan at Seattle's East Precinct. “We have requested that Mayor Durkan meet us at the precinct... not only are we requesting, we’re demanding. We are peaceful...” reports Heidi Groover in a tweet, below.

Pic from above at Westlake from a reader pic.twitter.com/5dAKLenaUx
— jseattle (@jseattle) June 1, 2020

Police will apparently allow the group to march up Pine to the East Precinct. “We have requested that Mayor Durkan meet us at the precinct... not only are we requesting, we’re demanding. We are peaceful...” pic.twitter.com/uiqkn9Nmol
— Heidi Groover (@heidigroover) June 2, 2020

Seattle Police Department released their early timeline of events from Saturday's protest: A lot of questions remain about the details, but here it is.

"TV has long had a police’s-eye perspective that helps shape the way viewers see the world, prioritizing the victories and struggles of police over communities being policed." Vulture has a piece up today about how on TV, cops are always the main characters. Speaking of Law & Order:

Take a moment and look at these new baby red pandas (which look more like raccoons than pandas, but are currently classified in their own family).

PSA: Don't bail out the new Washington State Convention Center. The WSCC is asking for a $300 million dollar bailout. "The biggest public construction project in Seattle history should have built homes, schools and parks," writes David Dahl for Crosscut. "Seattle is not Las Vegas, and pushing a visitor-driven economic recovery is dangerous during what will likely be a lengthy pandemic."

Things are getting intense in DC: Active duty troops have been deployed to DC.

When I asked @realDonaldTrump if he’s further enflaming tensions by deploying the military he sushed me. Declined to answer all other questions.
— Kristen Welker (@kwelkernbc) June 1, 2020

Trump has called protests in honor of George Floyd "domestic acts of terror": "These are not acts of peaceful protests. These are acts of domestic terror. The destruction of innocent life, and the spilling of innocent blood, is an offense to humanity and a crime against God." Jesus. Around the same time as the comments, the police cleared peaceful protestors with tear gas so the president could stand in front of a church with a Bible.

What do you think Biden will say tomorrow? If Biden loses I'm going to pretend that Washington is its own country and our governor, who god willing will not be Tim Eyman, is our president.

Organizers say police plan to join protesters in act of taking a knee “in solidarity.” One person in the crowd yells, “a knee does not mean shit” without real change. Crowd now chanting “take a knee SPD.”
— Rich Smith (@richsssmith) June 2, 2020

“We’re waiting for @MayorJenny. Has anyone checked her twitter?” An organzier says.
— Rich Smith (@richsssmith) June 2, 2020

Slog PM: Carlyle Won't Run for Reelection in 2022, Mugler Is Dead, Bothell Is NOT Better Than Seattle!