Activists pointed their finger at the wrong cop, city says. 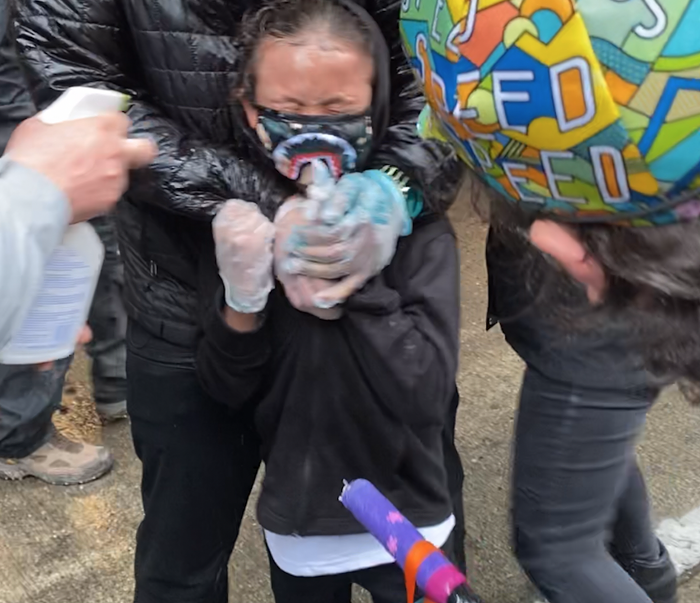 Officer Jared Campbell was not involved in this pepper spray incident, according to Seattle City Councilmember Lisa Herbold, who chairs the public safety committee. SCREENSHOT FROM EVAN HREHA'S VIDEO
In response to the social media furor over the last two days calling for the firing—or worse—of Seattle Police Department officer Jared Campbell following an incident involving pepper spray and a kid, today Seattle City Councilmember Lisa Herbold went on the record to clear something up.
Sponsored

Many people have been pressuring The Stranger to publish Campbell's full name and photograph and have argued that he needs to be fired.

A Change.org petition to get him arrested begins:

A video off child being maced recently began circulating. The officer responsible is Jared Campbell, a member of the Seattle Police Department. His badge number is 8470.

The Change.org petition has been signed by more than 8,000 people.

The Stranger has not been able to reach the kid's parents, though we would still very much like to hear their side of this story.

Activists also sent us video of Campbell being confronted by unseen protesters on Saturday. In the video, Campbell does not respond to questions. Though The Stranger decided not to publish the video until we had more information, versions of it have been shared widely online. This one video has been viewed 27,795 times.

Today the OPA also announced that they have received 12,000 complaints about SPD's actions this weekend, and they have a running list of the ten most cited by constituents. The incident involving the kid being pepper sprayed is at the top.

Here is more detail from the OPA:

Below are the ten specific incidents about which OPA has received the most complaints. We have assigned each a case number that can be used to track the progress online of the corresponding investigation. These investigations will be civilian-led and as transparent as possible given the law and police collective bargaining agreements. We will complete our investigations quickly due to the immense public concern and will provide updates via our website and Twitter.

Please note that we will not prejudge any actions prior to finishing our investigations. We respectfully caution the public about reaching findings without having all the evidence.

"Obviously there's a significant amount of anger out there, but we want the proper people to be identified in these cases," said Andrew Myerberg, director of the OPA.

Some people need to go delete whatever they've written about Campbell on social media in the last two days.

Tomorrow on Slog, we'll have some clarity from Councilmember Herbold on what she plans to do about cops covering up their badge numbers. The short version is: She's not cool with it.