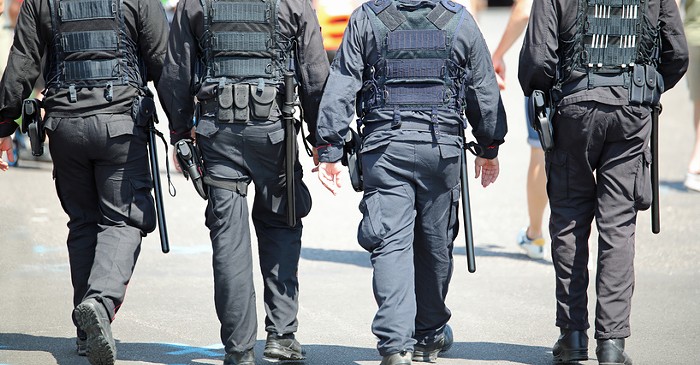 When crowds see police as unfair, unpredictable, and a threat, people no longer regard cops as legitimate authorities and are more likely to disobey. ChiccoDodiFC/Getty Images
You will be shocked, simply SHOCKED, to learn that after decades of researching effective methods for police response to large crowd actions, researchers have found — and you’re never going to believe this — that when cops show up in military gear and get aggressive, they actually make protest violence worse!
Sponsored

That’s one of the findings in “New Directions in Protest Policing,” a 2015 paper that reviews decades upon decades of police history and the conclusions of multiple separate commissions. Police that dress like they’re going to war, who try to control First Amendment expression rather than facilitate it, and who act in arbitrary ways can inflame violence and jeopardize their own safety and that of the public.

The paper was written by Edward R. Maguire, an Arizona State University professor in the School of Criminology and Criminal Justice, and it dives all the way back to the nation’s founding and the civil unrest that led to the creation of the United States.

He notes that in the last 50 years, police responses have shifted between a couple of different models: In the '60s and '70s, there was the “escalated force” model, which assumed that protesters would be compliant if they saw that they were hopelessly outmatched by the police; that was followed in the '80s and '90s by the “negotiated management” model, in which police remained in close communication with protesters so that neither side was surprised by the other; then the '90s gave rise to the “command and control” model in which police saw their role as dominating protests no matter how much force is required.

We have Seattle police to thank, in part, for the development of “command and control” (Miami played a role as well). The 1999 WTO protests in Seattle were decentralized, and police had few protest leaders to communicate with; so they launched into mass arrests and deploying chemical agents. Gosh that sounds familiar.

As it turns out, when crowds see police as unfair, unpredictable, and a threat, people no longer regard cops as legitimate authorities and are more likely to disobey. So when Fargo's deputy police chief is caught inciting riots, for example, or when Colorado police are seen firing the first shot at people who are just standing around, they’re endangering everyone.

So what’s a better approach? According to the paper, there’s a bunch of steps cops should take instead of showing up for war: They should view their role as facilitating the protest, rather than regulating it; communicate with protesters throughout by taking off the riot gear and walking with the crowd; and differentiate between bad actors and peaceful protesters.

These lessons aren’t exactly rocket science or brand new. Accounts of Seattle PD’s mistakes in 1999 read as though they could have been written in the last few days:

“Members of the public, including demonstrators, were victims of ill-conceived and sometimes pointless police actions to ‘clear the streets,’” wrote a Seattle City Council committee after the WTO actions. “Inquiry found troubling examples of seemingly gratuitous assaults on citizens… by officers who seemed motivated more by anger or fear than professional law enforcement.”

Norm Stamper, the Seattle Chief of Police who was forced to resign afterwards, said, “We used chemical agents, a euphemism for tear gas, against nonviolent and essentially nonthreatening protesters. The natural consequence of which [is] that we were the catalyst for heightened tension and conflict rather than peacekeepers.”

Our small, mighty, and local team is working hard to bring you coverage from Seattle's ongoing protests and policy discussions in response to the killing of George Floyd. If you are able, please consider supporting our work.
The Stranger depends on your continuing support to provide articles like this one. In return, we pledge our ongoing commitment to truthful, progressive journalism and serving our community. So if you’re able, please consider a small recurring contribution. Thank you—you are appreciated!
CONTRIBUTE NOW