Protesters, Here’s Where You Can Get Free Coronavirus Tests in Seattle 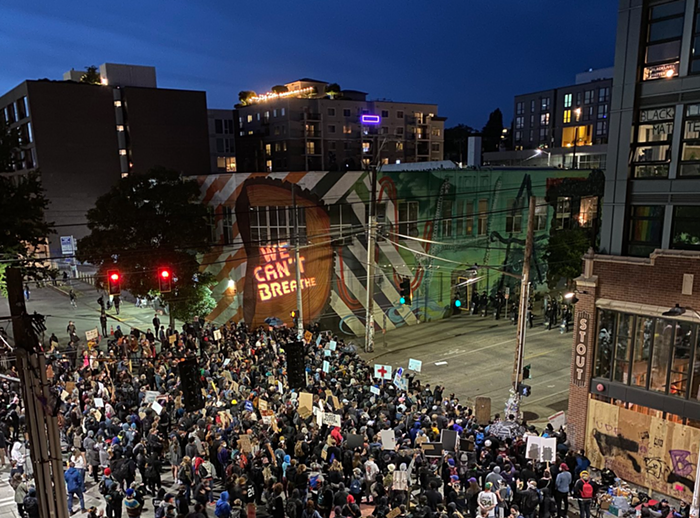 It's pretty hard to stay six feet apart when you're protesting. Photo by Chase Burns
If you’ve been at a protest in the last week, should you get a coronavirus test? That depends on whom you ask. Washington State Secretary of Health John Wiesman says not necessarily; Minnesota says yes; and CDC Director Robert Redfield says everyone who’s been to a protest should say, “Hey, I was out, I need to go get tested.”

As luck would have it, Seattle is opening two new free testing centers today, with plans to test 1,600 people per day.

In addition to the existing test sites downtown, at the baseball stadium where the Mariners play, and at Rainier Beach High School, one of the new locations for free tests is in Northgate next to the Home Depot; the other is in SoDo (oddly, also just a few blocks from another Home Depot). You’ll need to make an appointment to get tested before heading down, which you’ll be able to do soon at http://www.seattle.gov/mayor/covid-19 (as of writing, the appointment function hasn’t been added to the site yet, but it’s expected to go online today).

In addition, there are a couple of steps you can take to protect yourself when you go out to protest again:


Police tactics could be making transmission worse; by deploying tear gas and pepper spray, cops are making large crowds of people cough at each other, which isn’t great right now. Crowding detainees together will likely increase transmission. And as we’ve seen, lots of police aren’t wearing masks on the job.

If you think you have been potentially exposed to COVID-19, here's a resource from the state you should read.

And even if you haven’t been protesting, there are a lot of reasons to get a test anyway: If you live with someone who might have been exposed or if you work at a high-risk job, go get a test.

Should protests be cancelled altogether in the name of public health? No, of course they shouldn't, even if that was a remotely possible thing to do.

This isn’t the first time that public health has collided with political and moral movements, and there’s a set of guidelines known as “The Siracusa Principles” that basically indicate when free assembly should be curtailed to protect people. One of those principles is that protests should not be limited in a way that’s discriminatory or not based on evidence. Although the situation is very fluid right now, the general consensus from public officials is that trying to force everyone to stay indoors would be both impossible and unconstitutional.

So if you’re asking yourself, is it safe to protest right now? The short answer to that is no, it isn’t; but neither is pretending that police violence isn’t a threat to public health too.