If We Defund the Police, We Must Also Decriminalize Sex Work and Drugs 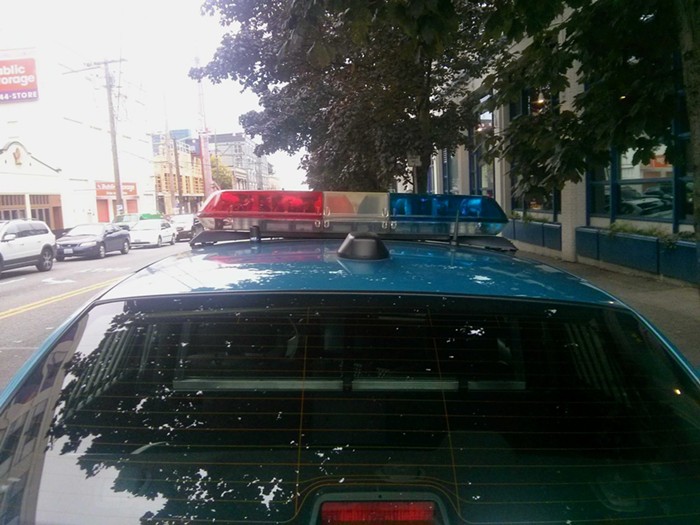 Durkan, do your beloved budget cuts here... Charles Mudede
What was seemingly unthinkable only two weeks ago is being openly debated at every level of the national discourse, from the street to the mainstream media: defunding the police.
Sponsored

Minneapolis City Council obtained a "veto-proof majority" to dismantle its city's police department and rebuild "a new system of public safety." And New York's mayor, Bill de Blasio, pledged to cut the budget of the largest police department in the US, NYPD, and reallocate the funds to social services. In Seattle, Mayor Jenny Durkan is facing growing demands to cut SPD's budget by 50 percent. And so we are entering a period in US's urban history that has all of sudden placed policing into a state of existential crisis: Do we really need it? What exactly does the police actually do with all of its time and money? Do cops make society safer? Who are the bad guys?


But defunding the police is not enough. De-policing must correspond with an aggressive reduction in the areas of society that are exposed to encounters with policing. Meaning, there can't be just be raw de-policing; this is unlikely to produce the desired results. Criminalization produces criminals, and criminals produce police officers. The opposite is also true. Decriminalization results in fewer criminals, and therefore less need for police officers. For example, sex workers are criminalized, and as such compose a group that's heavily policed (the vice department). The same goes for the users of controlled substance.

asking police nicely to follow more rules as a means of reform is tone deaf and completely useless for meaningful change.

be wary of “reform” policy that doesn’t address the root of the problem. we need to demilitarize and defund the police now. pic.twitter.com/vEKgLutSIg
— Munya (@raadzzi) June 4, 2020


What all of this points to is the essence of the demand to defund the police, which is a system-wide transformation of the urban domain. As so many have pointed out, too much of that domain is under the supervision of a department that has the fire-power to escalate a situation from a verbal conflict to a lethal one, often within a matter of seconds. There is no need for a sex worker or a drug user to ever encounter an armed enforcer of the law. The same goes for petty criminals. Successful but underfunded programs such as Law Enforcement Assisted Diversion (LEAD), which keeps the offenders of petty crimes out of jails and the costly court system, exist and already point in a post-police enforcement direction.


There is more. The shooting that occurred yesterday, June 7, during the Black Lives Matter protest on the corner of 11th and Pike vividly revealed another issue that must attend police defunding: gun control.

It is 1am and Nikolas Fernandez was just booked into King County Jail. Had the police barricade they improperly assembled this morning had held up, hundreds of people would have been in that intersection. And there would have been no barricade piece with which to stop the car. pic.twitter.com/WXWUlF1tVJ
— Spek (@spekulation) June 8, 2020

WATCH: “MY WHOLE THING WAS TO PROTECT THOSE PEOPLE.”

This is Daniel. He was SHOT IN THE ARM confronting a gunman in SEATTLE who had just intentionally driven into a protest and was stopped by citizens. (H/t @spekulation) pic.twitter.com/A9ydfBMF2q
— The Tennessee Holler (@TheTNHoller) June 8, 2020

The thing that has no obvious explanation in the US is the gigantic size of the gun industry's political power. What makes it so puzzling is the relative smallness of the industry itself. In 2019, for example, it only accounted for 225,000 commercial- and supply-related jobs. And if we exclude the fuzzy factor of induced impact, American guns generated about $40 billion in economic activity, which is not that much more than the revenue of the US's cruise industry. But political power of the gun industry is comparable that of US's gas and oil sector, which has a yearly revenue of around $200 billion. Indeed, a whole US party is devoted to a sector of the economy that could disappear tomorrow without much notice.

The explanation, I believe, is the police. Guns produce not only work within the industry but also the law enforcement complex. I think this in part explains the excessive tributes and funerals for officers shot to death while in the line of duty. The police never mentions gun control in the ceremonies for their slain. Police unions never say a word about the obvious: the easy access bad guys have to high-powered weapons. They want to sacralize the fallen and leave it at that. Another man or woman sacrificed for their pensions and mortgages in the suburbs. But in the US, officers are armed to the teeth because many citizens own powerful guns. And many of these citizens are men, and many of these men use guns to abuse or kill their domestic partners.

For the millions of American women and children affected by domestic violence every year, guns in the hands of domestic abusers pose a serious and lethal threat. In fact, when an abuser has access to a gun, a domestic violence victim is five times more likely to be killed. Laws that keep guns out of the hands of abusers save lives.

The point is: gun control is also an issue that must be a part of a program, defunding the police, that cannot happen in isolation.