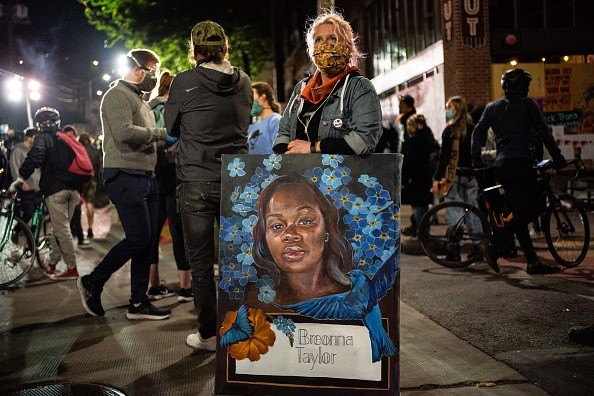 None of the police who were involved in Taylor's March 13th killing have been arrested. David Ryder/ Getty Images
Missing children's bodies recovered on stepdad's property: Two children, aged 8 and 17, have been missing since last September. Their mother, Lori Vallow, has refused to say where they are. She's been charged with deserting her children. That charge might change. On Wednesday, the children's remains were dug up on Vallow's husband's property in Idaho. He has been booked on two counts of destruction or concealment of evidence.

The airport is coming back: Passenger volume is up! But it's not where it's supposed to be. Volume is still 80 percent below what it was in February, the Seattle Times reports. Last week reached a 10-week high of airport travelers, though. Nature is healing.

Alaska Airlines prepares for cuts: The airline is anticipating a "smaller industry" for the near future. Alaska, which received $992 million in relief aid from the federal government in April, will be cutting around 3,000 jobs starting in October.

Donald hates the Autonomous Zone: Trump did some tweeting about the Capitol Hill Autonomous Zone, calling out Gov. Jay Inslee and Mayor Jenny Durkan to "stoop" [sic] this whole thing. Maybe that's the kind of reverse psychology our leaders needed to keep CHAZ around for good. I mean, is this the type of ugly anarchy he's talking about?

#Chaz made crops out of the crop circles in Cal Anderson pic.twitter.com/fX1b1X59Ld
— nathalie graham (@gramsofgnats) June 11, 2020

Congress proposes tear gas ban: Police across the country may now have to reckon with a tear gas ban that would impact all police departments. We're talking tear gas getting banned at the federal level, baby. It would ban tear gas and any police agency that doesn't comply with the ban will not receive federal funding. The legislation is being proposed by Democratic Reps. Alexandria Ocasio-Cortez of New York, Mark Takano of Riverside and Jesus “Chuy” Garcia of Chicago.

Seattle youth march turns weird: The youth were marching from Volunteer Park to the West Precinct in downtown Seattle. There was nary a cop in sight. Not even when a driver allegedly "charged the crowd." Kids had to run out of the vehicle's path before it ducked into an underground parking garage. No one appeared to be seriously injured except for this guy''s bike which he sacrificed to stop the car.

Miraculously nobody seemed seriously hurt by the charging car that I know of— a few people are getting treated for bleeding hands, but a man threw his bike at the car to stop it, which got smashed #seattleprotests https://t.co/iwXo59fvJE pic.twitter.com/eOTy9c19yf
— Lindsey Wasson (@lindseywasson) June 11, 2020

"The police report for the killing of Breonna Taylor is almost entirely blank": Oh man, this whole thing is so bleak. Breonna Taylor, who was killed around 1 a.m. on March 13th when officers investigating suspects in a narcotic case 10 miles away from where Taylor lived forcefully entered her home with a "no-knock" warrant (aka with a battering ram). None of that is in the official police report that the Louisville Metro Police Department released on Wednesday. As the Intelligencer puts it: "The blank report from the shooting suggests a negligent level of commitment to police accountability at best and an attempt to avoid being held to an official document in future proceedings at worst."

Now this is a video: A compilation of racist statues being torn down, set to . CORRECTION: The song is actually "Only Time."

Coronavirus should still be a concern: Cases are spiking in 21 states nationwide. The total number of cases in the U.S. has reached over two million. The federal government seems to have moved on. Meanwhile, Arizona is warning that its hospitals could be full next month, Texas has seen a 42 percent increase in hospitalizations since last month, and there's a good chance that protests nationwide could cause a spike in cases.

Oh no: What useless bullshit are the celebs doing now?

regret to inform you the celebs are at it again pic.twitter.com/pfORBiqvrX
— Marlow Stern (@MarlowNYC) June 11, 2020

Woman in her 20s receives double lung transplant: Because COVID-19 had completely obliterated her lungs. She had no underlying conditions and was perfectly healthy. Doctors decided to perform the double lung transplant as the only option to save her life. The operation is the first of its kind in the U.S. Read the full article for the story but also the gnarly picture of what her old lungs looked like.

This picture has a point:

Facebook recruiters contemplate work stoppage: To get Mark Zuckerberg to grow a backbone and stand up to Trump. Workers whose key role is to interview potential Facebook candidates are stopping their work. Many can't rationalize their work anymore, feeling that they can't in good conscience tell anyone to work there.

Bored? How about a free crossword?

Here: Watch these turtles migrate. You need it.

A drone has captured spectacular pictures of green turtles migrating to an Island on the Great Barrier Reef. The annual nesting season can now be monitored from the air helping to protect population stocks. https://t.co/rHSW5etH8Q #7NEWS pic.twitter.com/xzdlAAbIX8
— 7NEWS Brisbane (@7NewsBrisbane) June 9, 2020