Slog AM: 18 Early Morning Photos Inside #CHAZ, and a Reminder About Today's Strike and March Photo taken approximately 6:30 am today. Christopher Frizzelle
The Black Lives Matter Statewide Silent March: Is meeting up at Judkins Park at 1, and the march itself begins at 2. It's two miles long and expected to last 90 minutes. Here's a map.

The Stranger Gave All Employees a Paid Day Off: To be able to participate in the statewide strike and silent march. But we didn't want to leave you empty-handed on Slog this morning, so I got up early, walked over to the #CHAZ, and snapped pictures of what early morning looks like. [Eds. Note: Follow Rich Smith for updates from today's Black Lives Matter Seattle Statewide Silent March and General Strike. Jasmyne Keimig will be getting up a Slog PM today, with updates from that march and this one, which Chase Burns is attending.]

I will drop in brief news items: Between the pictures.

A woman and a shark painted by Perry Porter. Photo by Christopher Frizzelle
A petition has been started: Pushing for the Seattle Police Department’s East Precinct building "to be turned into a community center."

This A gets an A+. Photo by Christopher Frizzelle
A Tacoma woman has been charged: With "five federal counts of arson for burning five Seattle Police Department vehicles in the area of 6th and Pine Streets downtown" two weeks ago.

This artist is Perri Rhoden. Photo by Christopher Frizzelle
SPD claims response times are way up: "Chief Carmen Best says it is taking on average 18 minutes for officers to get to emergency calls."

Then again SPD said #CHAZ insiders were shaking down businesses for money: Which was completely made up, so who can believe a single thing SPD says?

An L that sparkles. ✨ Photo by Christopher Frizzelle
Fuck. "An Asian giant hornet was found in Bellingham," KIRO reports. "The person who found the hornet told WSDA officials that it was wiggling on their porch, and they stepped on it and killed it."

The V is painted by Aramis O. Hamer. Photo by Christopher Frizzelle
"It is my expectation that schools will open this fall for in-person instruction." So says the state’s Superintendent of Public Instruction.

Most of the tents inside #CHAZ are over in the grass, but there are some scattered elsewhere. Photo by Christopher Frizzelle
King County Metro: Announced that it is cutting services for the fall and bus routes will be effected.

I have a crush on this M. Photo by Christopher Frizzelle
Nintendo says that more people got hacked than they first realized: It wasn't 160,000 accounts. It was more like 300,000. Every letter is amazing. I wish I knew who made each one. Photo by Christopher Frizzelle
Here's the document you have to agree to in order to attend a Trump rally: Surprisingly, the document doesn't say, "I agree that I am a complete dumbfuck" across the top.

Most people are still sleeping. It's about 6:35 am. Photo by Christopher Frizzelle
Bye, Felicia: NASCAR driver "quitting over the company's decision to ban the Confederate flag." Oh, c'mon man, quitting? Couldn't you get blown up trying to make a turn instead?

The artist is either this futurecrystals or this future_crystals. Photo by Christopher Frizzelle
Oklahoma police release a video from last year: "In the video, Derrick Scott, 42, is pinned to the ground by two police officers and could be heard saying, 'I can't breathe.' One officer responds 'I don't care.' One hour after he was taken into custody, Scott was dead."

This is what the residential part of #CHAZ looks like. Photo by Christopher Frizzelle
Meanwhile in Boston: "The mayor of Boston issued an executive order declaring racism to be a public health crisis and said the city would take $3 million from the Police Department’s overtime budget and spend it on health initiatives," NYT reports.

But there are lots of places to put tents and hammocks. Photo by Christopher Frizzelle
Meanwhile in Minnesota: "Shaken by the killing of George Floyd in Minneapolis and inspired by the protests that followed, the Minnesota State Legislature will convene a special session on Friday to consider a package of bills aimed at overhauling policing and redressing policies that have led to systemic economic inequality."

Yes, there is also green space. Photo by Christopher Frizzelle
Tucker Carlson is losing advertisers: Over his comments on Black Lives Matter.

The No Cop Co-Op has free food for anyone who's not a cop. Photo by Christopher Frizzelle
So, hey, NFL—have you apologized yet to Colin Kaepernick? Nope, nope you haven't. Someone's working on some new lettering that says "DEFUND SPD."
Coronavirus Could Make America's Gun Problem Even Deadlier: Ugh, what a headline. "Stress and isolation combined with another feature of American life — easy access to firearms — could form a deadly brew." 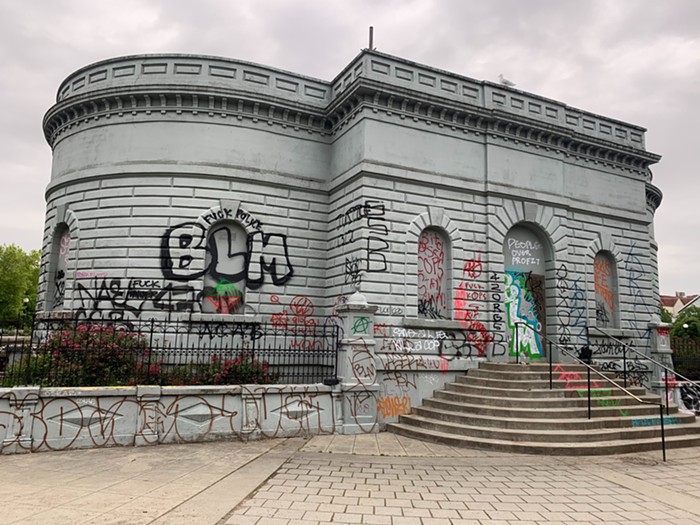 This structure has stood here ever since the reservoir, which was buried underneath Cal Anderson Park in 2003, was first built in 1901. Photo by Christopher Frizzelle
Washington state's coronavirus cases: Are on the rise again. Just the beginning. Photo by Christopher Frizzelle
Last thing: Did you watch this video this morning? Watch it.
Sponsored

A Message to the City from Ms. Pak-Man

Slog PM: Crypto Hackers Flex on the Rich and Famous