Tags and chalk seen yesterday in the Capitol Hill Organized Protest area, aka CHOP, aka CHAZ. Photo by Christopher Frizzelle
CHAZ... CHOP... changitty chang sha-bop... If you're wondering about the name change from CHAZ to CHOP, here's the reason: "This is not an autonomous zone. We are not trying to secede from the United States... We need the conditions of our rights to be held, and we are expressing our legal application of these rights. By seceding from the United States, it would rescind that, and we're not doing that."

As someone else put it, regarding autonomous zones and secession: "Leave that to the confederates."

SPD's budget swelled by more than $100 million over the last five years: Seattle Times takes a look at what all that money went to. 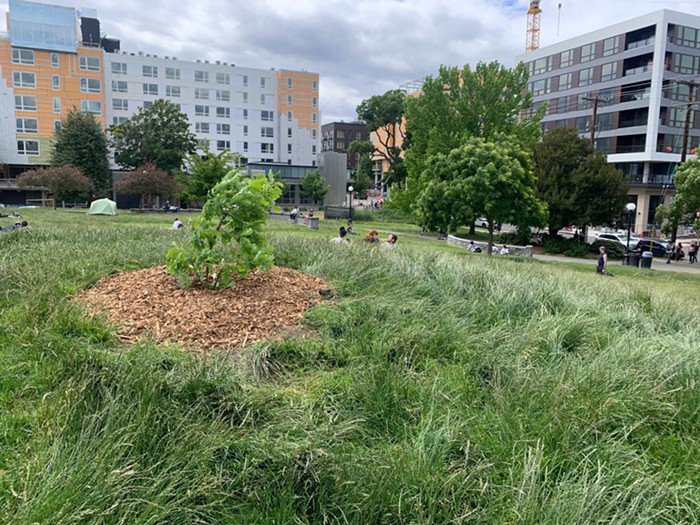 A new plant has appeared at the top of Teletubby hill inside CHOP/CHAZ. Judging from the leaves, it appears to be oak? Photo by Christopher Frizzelle
Police Chief Carmen Best was on Face the Nation yesterday: "This is a pivotal moment in history. We are going to move in a different direction, and policing will never be the same as it was before."

Best was asked about the "six-block autonomous zone" on Capitol Hill: "My understanding is they have actually changed the name to the Capitol Hill Organized Protest area," Best says. "One of our real challenges there is trying to determine who is a leader or influencer—that seems to change daily. I know that many of our city officials and others are trying to establish some sort of communication with someone who can give us some direction about what the intent is and how we might move forward."

What would cutting SPD's budget in half look like? "Cutting $200 million of SPD’s $400 million budget will mean fewer officers," Seattle Times writes, "and it will mean many of the tasks police now performs will either have to be done by someone else or will have to be abandoned."

US Supreme Court says LGBTQ people cannot be discriminated against at work: You'd think this one would be a no-brainer, but actually this was a nail-biter because the Trump administration was arguing that trans people and other LGBTQ Americans should not be protected.

So what happened? "The landmark ruling will extend protections to millions of workers nationwide and is a defeat for the Trump administration, which argued that Title VII of the Civil Rights Act that bars discrimination based on sex did not extend to claims of gender identity and sexual orientation," CNN reports. "The 6-3 opinion was written by Justice Neil Gorsuch and joined by Chief Justice John Roberts and the court's four liberal justices."

Joe Biden says: "While we celebrate this victory today, we know that our work is not yet done." 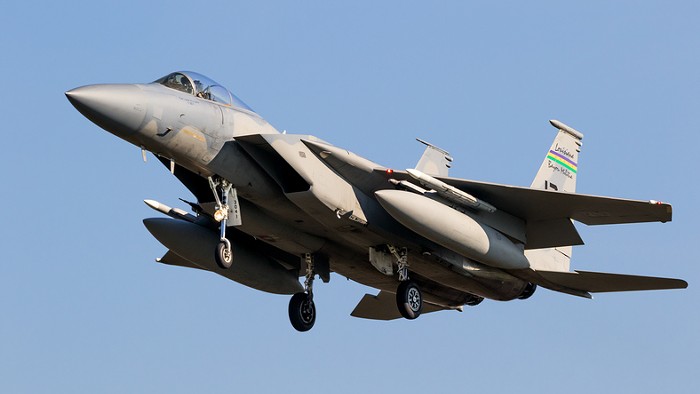 A U.S. Air Force F-15C Eagle like this one crashed this morning. VanderWolf-Images/Getty Images
U.S. Air Force fighter plane crashes into the North Sea: "The aircraft was on a routine training mission with one pilot on board. The cause of the crash as well as the status of the pilot are unknown."

Amazon said yesterday Jeff Bezos is willing to testify: "Before a House antitrust investigation into the market power of major tech companies."

Don't eat that ground beef: 42,922 pounds of ground beef products being recalled because of a possible E. coli contamination. "The products were sold under the brand names Marketside Butcher and Thomas Farms," King5 reports.

It's Aleksa Manila's birthday!! Courtesy of Aleksa Manila
Drag performer Aleksa Manila is 45 years young today: The gal whose motto is "DRAG, not drugs" talks about how much this whole month means to her right over here.

Do you have your ticket for Wednesday's Silent Reading Party? Just take care of it now so you don't have to do the mad scramble on the day of.