Durkan's great scrub. JK
So, it is over. The cultural/political experiment initially called CHAZ (later CHOP) ended with a show of force authorized by Mayor Jenny Durkan. The occupants were removed swiftly and skillfully because the city under Durkan has mastered the logistics of clearing homeless camps.

Removing the art (and even the garden), however, has not gone as smoothly for Durkan's team of police, park, and transportation officials. The playbook for this kind of removal turns out to have many blank pages. How much of the art does the public like or feel strongly about? What should be erased? Which works are to be relocated and preserved?

There can be no question about art that made the Seattle Police Department the Seattle People Department. This must go. And the same goes for the anti-cop graffiti that's all over the place. That sort of thing will be met with no mercy by what my colleague Jasmyne Keimig calls the "Great Durkan Scrubbing." But the rest of the graffiti is not so easy to dismiss.

That is what's left of CHOP. These nettlesome decisions that must be made by city officials. But this sorry conclusion is consistent with the kind of Seattle that took shape in the first half of the previous decade. We can call it the post-gentrified city (the period of gentrification proper being between 1990 and 2012).

Before the end of the dream. After the end of the dream. CM
The city abandoned by mid-century white surbanization was rapidly transformed in the 1990s by mass-displacement and an urban renewal program directed by a financial capital that appropriated and deployed the principles of the post-war urban activist Jane Jacobs (walkability, placemaking, human-scaled design, and so on). The moment the profits generated from gentrification proper (as defined by Ruth Glass, a mid-century urban sociologist whose perspective must compliment that of Jane Jacobs if the urbanist program is to have content) begin to decline or stagnate or plunge into the bottomless black hole of a system crash, such as the one in 2008, what emerges is an urbanism characterized by the strict inflation of asset values by asset-value inflation.

The past six years have seen market urbanism recede as billionaire urbanism approaches. The future will see CHOP, a social and spatial switch point that unexpectedly appeared in the midst of protests provoked by the murder of George Floyd, as a desperate act of resistance, at the street level, the level of the people, against the full conversion of Seattle's economy to the phantasmagoria of billionaire capitalism.

The CHOP switch point opened by BLM activists and anti-capitalists is explained in Thomas Piketty's most recent work, Capital and Ideology. He writes that such switch points open "the way to a large number of possible future trajectories. The actual outcome then depends on how actors mobilize and seize on shared experiences and new ideas to change the course of events." The removal of CHOP by police force eliminated its switch point. The future is now directed (or doomed) to continue the trajectory established by the collapse of a post-gentrification economics that concentrated (in asset markets) and centralized (in housing markets) capital owned by a mindbogglingly small fraction of the population. The rate of the growth of the economy as a whole is to be superseded by the growth of capital alone.

Autonomous zones have also appeared in post-industrial Detroit. Black artists in that city occupied spaces abandoned by capital in the 1980s, 1990s, and 2000s. There is The Heidelberg Project, and Dabls Mbad African Bead Museum. Both form two points of a triangle whose third point is the city's business district. Both projects are similar in the sense that they converted the materials of industrial Detroit into outdoor art environments. One has the sense, when visiting these zones, that the materials (metal bits, plastic shells, shards of glass, slabs of concrete) vacated by the authoritarian spirit of capital, have been possessed by an art whose spirit is democratic and black African. Indeed, one installation in Dabls Mbad African Bead Museum has industrial materials attending a church service (blocks of concrete listening to a sermon delivered by a preacher composed of rusty nails, rebar, a pipes). The materials are now free to learn from the spirit of their freedom. 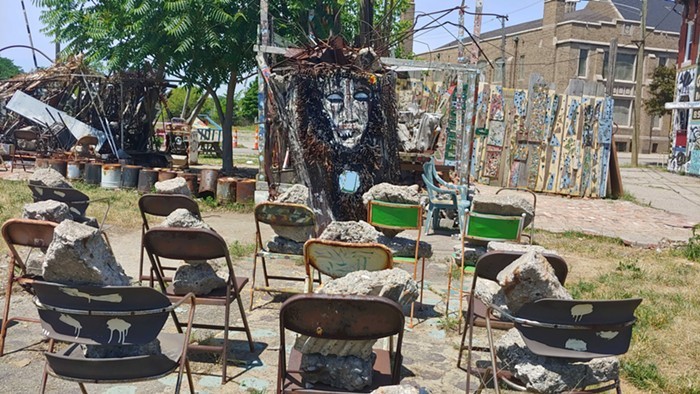 The sermon on the industrial materials of Dabls Mbad African Bead Museum. CM
The switch points of the projects led to their quasi-institutionalization (this is not the case with all such zones in Detroit). In the case of Dabls Mbad African Bead Museum, it became a small business, an indoor gallery (which completed its first stage of development last year), and massive and elaborate installations, some of which are sponsored by the city's elites. These zones have, for sure, become tourist destinations, but they are also still not fully captured by capital because value inflation in that city is still pretty weak when compared to Seattle, the City of Multi-Billionaires.

There is no way to miss the aesthetic connections between the Detroit zones and the one that existed in the heart of Capitol Hill during much of June, 2020. The art and spirit of CHOP was democratic and black American in its inspiration and its raison dêtre.

But Seattle's artists and activists did not occupy a space vacated by capital. No. It was completely the other way around. The total dollar value of property in and surrounding that occupied area easily passes a billion. And once the economy has reopened, the construction of luxury apartments for the construction of luxury apartments will resume. CHOP was a switch point that was barely there to begin with. The hope for even some kind of institutionalization was here misplaced. Pressing on every side of this one switch point was not just the maintenance of over-inflated property values but the push to continue the inflation of this over-inflation, the final economics of a city that has entirely abandoned the department of the real, the department of the people.