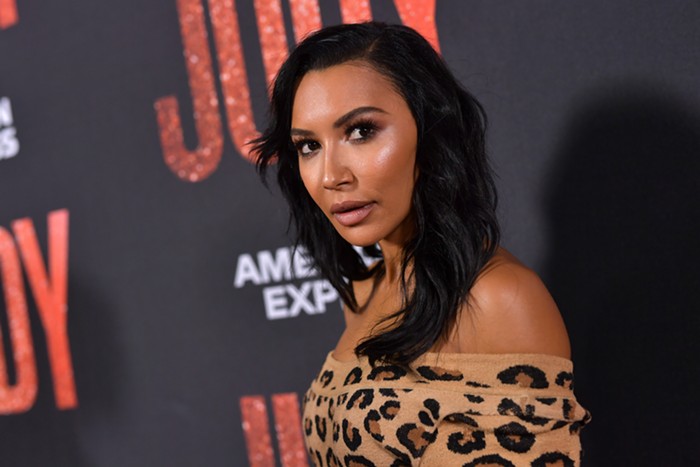 The body of actress Naya Rivera has been confirmed as found after a six day search on Lake Piru in southern California. Emma McIntyre / Getty
Naya Rivera's body found after a six day search: The former Glee star went missing last week during a boating trip with her four-year-old son in southern California. Authorities say there is no indication of foul play or suicide, and they are in direct contact with her family. Rivera's character on Glee, Santana Lopez, was one of the first on-screen representations I ever saw of a young, queer, woman of color. Rest in peace, Naya.

i remember being blown away by the amount of raw emotion naya controlled in this performance and still think about it all the time pic.twitter.com/QkFp0VAPem
— gabe bergado (@gabebergado) July 13, 2020

This photo of the cast of #Glee gathering together at Lake Piru today where #NayaRivera’s body was found is incredibly powerful — especially when you consider today is the 7 year anniversary of Cory Monteith’s death. I’m a mess. pic.twitter.com/RhY9hUb78E
— Dave Quinn (@NineDaves) July 13, 2020

Paid parking restarts today! Don't forget!: After weeks of free parking meant to aid COVID-19 essential trips, the City of Seattle turned the meters back on today as businesses are slowly reopening, reports CHS Blog. Parking isn't quite at its normal rate, but set at $0.50/hour for "at least a month" the city said in its announcement of the change. Hourly time limits will be enforced in unpaid neighborhood business districts as well as restricted parking zones.

ICYMI, the effort to "fire" Mayor Jenny Durkan gained some steam when a King Country Superior Court judge approved a recall petition for signature collection on Friday. Of the seven charges presented to the court, Judge Mary E. Roberts dismissed six as insufficient, but allowed the charge regarding Durkan's sanction of tear gas and other crowd control weapons during a pandemic to proceed "more narrowly than alleged," the Seattle Times reported. Here's what needs to happen if we are to see Durkan deposed, via Elise Takahama at the Times:

The petitioners must, within 180 days, collect valid signatures from a number of voters equal to 25% of the votes cast in the last election. In this case, signatures from more than 50,000 Seattle voters would be needed.

German Rambo on the loose: Hundreds of law enforcement officers are on the hunt for a "31-year-old man in camouflage clothing" named Yves Etienne Rausch, who disarmed four officers at gunpoint then "fled into the forest with a pistol, knife, and a bow and arrow" outside the southwestern town of Oppenau. Raush is believed to have been living in the forest "for weeks" as tactical teams, sniffer dogs, and helicopters comb the terrain looking for this dude, reports AP.

In a press conference on the Seattle Police Department budget today, Mayor Jenny Durkan and SPD Chief Carmen Best slammed the city council's support of defunding SPD by 50 percent: Calling the council members' support for the activists' demands "reckless" (Best) and "irresponsible" (Durkan), the mayor laid out a plan for $76 million in cuts, about 20% of SPD's current budget. Staff writer Nathalie Graham has more on the meeting here.

Last Friday, President Donald Trump received widespread criticism after commuting the sentence of his friend and inept Bond villain Roger Stone: The details of the clemency grant were released today and they are as appalling as you'd think. It's just so slimy!

Totoakaelo closes for good: Their parent company pulled the plug on the shop last week, citing losses due to the coronavirus pandemic. The fashion retailer moved to the Hill in 2012 and is one of three clothing stores—including Urban Outfitters and Le Frock—to close during the COVID-19 crisis, reports CHS Blog.

Washington Governor Jay Inslee wrote to President Trump, requesting the National Guard pandemic mission be extended through the end of the year, reports KOMO. He says the 1,000 "citizen-soldiers and airmen" are "critical to our efforts to slow the spread of the virus by supporting COVID-mapping missions, assembling test kits, and operating community-based test sites."

SiriusXM is going to acquire podcasting company Stitcher for $325 million, reports the L.A. Times. It's the industry's largest deal yet as the satellite radio station eyes a greater stake in podcasting as a whole. The deal will add more than 150 million listeners across all of SiriusXM's properties.

CBS announces a new initiative aimed at increasing diversity behind the scenes: The network television giant is committing at least 25% of its script development budget to creators and producers who are Black, Indigenous, and people of color starting with the 2021-22 development season, reports Soraya Nadia McDonald at The Undefeated. In addition, they are aiming to make the network's writers' rooms 40% Black, Indigenous, and people of color for the same season, increasing to 50% the next year.

"I love history, I love poster art," said New York Governor Andrew Cuomo today as his office released an old-timey poster using a mountain as an analogy for the state's fight against coronavirus. I'll write more on this tomorrow, but for now, revel in its ridiculousness. I'm obsessed.

California does some major backtracking as Governor Gavin Newsom announces new measures aimed at fighting the rapid rise of COVID cases: 30 counties monitored by the state—making up 80% of California's population—are now required to close malls, hair salons, places of worship, and fitness centers according to the Sacramento Bee. Additionally, all counties in the state are required to close indoor dining at restaurants, wineries, theaters, zoos, museums, card rooms, bars, and family entertainment centers. California's COVID-19 positivity rate has risen to about 7.7 percent over the past week.

12 protesters (or their families) filed claims against the city of Seattle, King County, and the state, "alleging excessive force by police or the failure of police to secure the safety of peaceful protesters" reports David Gutman for the Seattle Times. The claims are the first step in filing a lawsuit against the government; the city, county, and state have 60 days to respond. Among the claimaints is Daniel Gregory—who was shot in the arm during the protests on the Hill—and the family of Summer Taylor, the demonstrator who was killed while protesting on I-5 earlier this month.

Also just an FYI: Rachel of Rachel's Ginger Beer—who is white—has made an appointment to cut off her dreadlocks, apologizing for "the pain i caused to the members of the african-american community, who have been and still are discriminated against & mistreated for having dreadlocks."