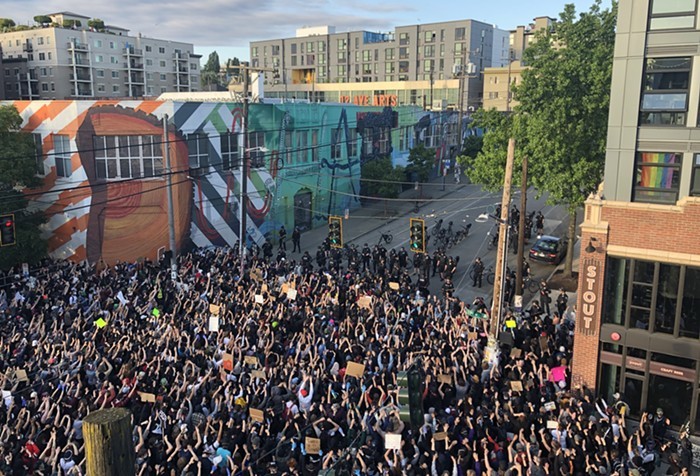 The City has CHOP and Portland on its mind. Rich Smith
McDonald's is requiring customers to wear face masks at all of its restaurants in the states: The rule will be implemented starting August 1. What's wild is that the fast food chain is putting its employees through "de-escalation training" as mask-wearing has not been accepted in all parts of the country. America the Beautiful!

There will be protests and demonstrations this weekend: We've organized various resistance events here, but one of the main listed events is the Youth Day Of Action tomorrow in Capitol Hill, organized by the PNW Youth Liberation Front. There's also a "Refuse Fascism" event in Green Lake Park tomorrow. And, of course, expect activity around the West Precinct and federal courthouse.

The United States Space Force's primary command could set up shop in Spokane: Especially if Eastern Washington Rep. Cathy McMorris Rodgers has anything to do with it.

"New survey data shows that for one in four Seattle-area residents who’ve moved in the past five years, moving wasn’t a choice," reports FYI Guy Gene Balk for the Seattle Times. His data-digging through the 2019 Household Travel Survey also shows that the displacement problem isn't restricted to Seattle or King County, it's regional. It's happening from Burien to Bremerton.

Ciara and Seahawks' Russell Wilson have a new baby: His name is Win. Win Wilson.

The Robert E. Lee High School in Virginia has a new name: It's now the John R. Lewis High School.

Fact Check: Education Secretary Betsy DeVos claimed that children are "stoppers" of the coronavirus. The quote:

“More and more studies show that kids are actually stoppers of the disease and they don’t get it and transmit it themselves, so we should be in a posture of—the default should be getting back to school kids in person, in the classroom.”

That's not true. The Washington Post goes in-depth into why DeVos is wrong, but: "To claim that children actually may stop the spread of the disease shows a stunning lack of due diligence."

Washington state Attorney General Bob Ferguson is suing the U.S. Department of Education: For the way it is distributing CARES Act funds to schools. Ferguson says the department has created new rules for spending "that would require public school districts to share a larger portion of the money with private schools that operate within their borders." The Seattle Times has more on it here.

This tawny frogmouth chick was born recently at the Woodland Park Zoo: According to the zoo's blog, it's the 38th frogmouth hatched at WPZ since the very first hatching in 2009. Native to Australia, tawny frogmouths are nocturnal and are often mistaken for owls. It looks like a pile of cotton balls with a weird little mouth. We could cry!! Read more about these bubs here.

More people are identifying as Republican in Washington state, according to this month’s Crosscut/Elway Poll. More from H. Stuart Elway:

A year ago, party identification was at 41% Democrats and 21% Republicans — the widest gap in the 28 years of this poll. Since then, the gap has narrowed in three subsequent polls to 11 points, which is just above the 10-year average of 10 points. The gap was narrowed by Republican identification gaining 8 points while Democrats lost 1 point. The 29% who identified as Republicans in this poll is the highest percentage since February 2012.

The question is, why has Republican identification increased and why are those who identify as Republicans generally more optimistic than the Democrats? Don’t they know a “Blue Tsunami” is supposed to be coming to wash them away? These data don’t suggest answers, but they pose a fascinating question. We’ll be watching.

Michael Cohen is a free man: President Donald Trump's (former) personal lawyer moseyed on out of federal prison today after a judge ruled he had been sent back to prison from home confinement because he refused to sign a form banning him from publishing a book critical of Trump before the November election.

Man it's a hot one: "One" meaning this weekend. Can't wait for the sun to roast pale Seattle flesh!

♦️#Seattle will go from cloudy & cool to sunny & hot by Sunday.

♦️Highs in the mid-80s Sunday will rise into the low 90s on Monday.

Tokyo is facing another round of record-high coronavirus infections: Their cases are still much lower than ours: "Daily cases shattered previous records nationwide and in the capital this week on Thursday when Japan logged 981 new cases, of which 366 occurred in Tokyo." But things aren't looking good for Tokyo 2021.

"I was still afraid to go back to my own high-school reunion," says Mira Sorvino to Vulture in an interview that looks back on Romy and Michele’s High School Reunion. "Even after having made Romy and Michele, after having won an Oscar, after getting married and having kids, I was still afraid of the mean kids." If you need a quick mental health break from all the terrible news, read this.

Smirking MAGA hat-wearing white teen settles lawsuit with Washington Post: Nicholas Sandmann sued the newspaper after a video of him seemingly disrespecting Omaha tribe elder Nathan Phillips went viral last year. The defamation lawsuit was previously dismissed by a judge, but then reinstated with a significantly narrowed scope. Neither the Post nor Sandmann disclosed the terms of the settlement. 100 bucks says Trump picks this kid for a cabinet position by the end of the year.

Do you have a library book you need to return?: Seattle Public Library is accepting returns at the Ballard, Broadview, Douglass-Truth, Green Lake, High Point, Lake City, Northeast, and Southwest branches on Tuesdays, Thursdays, and Saturdays from noon to 6 p.m., says the Seattle Times. But there's no rush! All due dates are extended to August 15.

Have you listened to the new Taylor Swift album? Neither have we!

The DOJ just asked Judge Robart for a temporary restraining order preventing the City Council's ban on crowd-control weapons from being implemented by SPD as per a directive issued by Chief Carmen Best. https://t.co/pw82rmI4y5
— SCC Insight (@SCC_Insight) July 25, 2020

"While City Council may have intended the ban on these less lethal implements to prevent the use of excessive force, the Directive—which removes them without providing training or alternative mechanisms to de-escalate and resolve the dangerous situations officers routinely find themselves—may cause it," reads one sentence. Read the whole thing here, uploaded by Kevin Schofield at SCC Insight.

This is a really interesting legal twist. Having the city ask for a TRO is weird because it's essentially asking the judge to issue a TRO on itself. But the DOJ is the opposite party. Also, the DOJ isn't challenging the ordinance; it's challenging SPD's implementation directive.
— SCC Insight (@SCC_Insight) July 25, 2020

Filed at 6:30pm on a Friday, to stop implementation that begins at 3am tomorrow morning. Robart is going to love that.
— SCC Insight (@SCC_Insight) July 25, 2020

A final word from the Seattle CPC:

As we head into this weekend, here’s an important perspective from @SeaCPC about SPD’s ongoing desire to use chemical weapons during impending protests. #seattleprotests https://t.co/eqkwc7R9Nq pic.twitter.com/WnuPT4gUaH