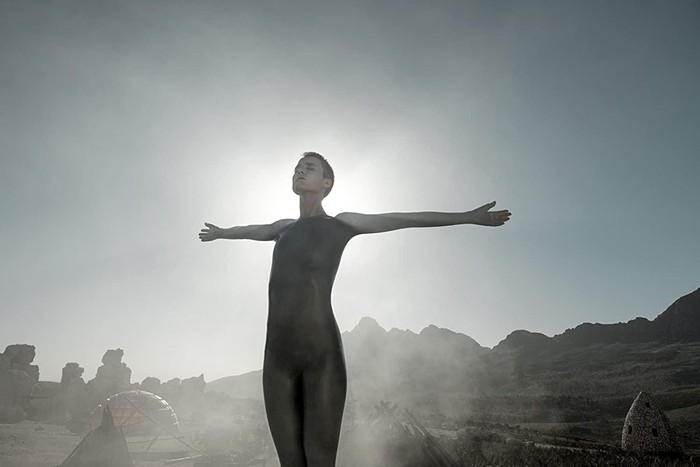 Flying robot with laser eyes... HBO
One of the most impressive things about HBO's new science fiction series, Raised by Wolves, is its theme song. The show is about two robots (black father; white mother) who are on a mission to raise humans on Kepler-22b, "an extrasolar planet orbiting within the habitable zone of the Sun-like star Kepler-22." One can describe this mission as nearly impossible. But that's all that's left for humans, who have destroyed their own planet, not so much from metabolic rift (the cultural unchaining of an economy from the cyclical processes of nature), but from religious wars, or, as far as I can tell, wars between the believers and the non-believers.

I have written about God's role and place in this show. It turns out that many of my speculations were premature. But I will deal with those theological issues in another post. This one wants only to recognize not just the beauty of the sorrow in the theme song, but to identify the real source of this sorrow.

The song is performed by Mariam Wallentin, a Swedish musician with a background in experimental jazz and "whose other-worldly vocal qualities are unmistakable."

What we hear matches what we see in the opening sequence. The world is on fire. Nuclear bombs are exploding. The Golden State Bridge is collaping. A flying robot with laser eyes vaporizes its target. Visually, this sequence is a dub (or an echo) of Fritz Lang's 1927 film Metropolis. The style of Lang's gigantic city is here matched by Wolves' equally stylish and gigantic destruction. And Wallentin sings like a spirit roaming the rubble of a capitalist civilization.

At the end of the sequence, there is a boom. A space ship cracks the darkness and shoots like a falling star toward the new planet. There is nothing to feel good about here. Will this be all humans have in the future? This long shot? Even if the robots survived the journey and managed to raise a few humans, it seems not to be worth the trouble and emotional investment. Humans are truly finished at this point. They had their moment, and they turned it all to dust and bones. Too much has been lost on Earth for humanity to matter on Kepler-22b. You can only love the robots in this show.

If you are on the left, and somehow recent events have not placed you in the frame of mind we hear in the theme song for Raised by Wolves, then your optimism is actually scary.