Slog PM: Wyman Is Out, Microsoft Is Up, and There's About to Be a COVID Vaccine for Kids Also, this is just a note to the three dudes I saw walking around the grocery store this afternoon with their noses out their masks. Sticker Patrol circa 2020
Washington's Secretary of State is off to the other Washington: Republican Secretary of State Kim Wyman announced her resignation today, confirming CNN's reporting yesterday that she is leaving the statewide position to work as a senior election security lead for Joe Biden's administration. As we barrel toward the 2022 midterms, Team Biden likely selected Wyman in part to instill confidence in Republicans that our voting systems are secure. Wyman couldn't convince her state's leading Republican, Loren Culp, that our elections aren't rife with fraud in 2020. (That dude is still pushing election conspiracy theories. And running for Congress.)

Secretary of State Kim Wyman will be accepting an appointment to serve as the Senior Election Security Lead for the Cybersecurity and Infrastructure Security Agency (CISA), the nation's lead for cyber, infrastructure, and election security.

Now a Democrat gets to choose who takes her seat: Wyman was the last remaining Republican holding statewide office in Washington, and Gov. Inslee will choose her temporary replacement. Her last day will be November 19, reports the Seattle Times. Wyman's replacement will fill the position until next November's election, when the state will vote on who should fill the spot until Wyman's term is up in 2024.

Melissa Santos at Crosscut compiled a shortlist of people who could replace Wyman, and it includes Stranger Election Control Board favorites Julie Wise and Gael Tarleton. It also includes this horrible quote:

Chad Minnick, a GOP political consultant, said that if Inslee chooses a Democrat for the position, it will fuel anger among those Republican voters who already think elections are rigged and rife with fraud.

“That would really charge up the base going into next year,” he said.

Consequence culture: Another controversy has entangled local shock jock and high school basketball coach Dori Monson. The Shoreline School District apparently just noticed that the conservative radio demon has a Twitter account. They say they've denied Monson's request to coach their high school girls basketball team because of his inappropriate comments. He's spent 26 years coaching high school basketball, and his attorney has threatened a lawsuit, reports Seattle Times, with Monson saying he's "the ultimate cancel culture victim." Which tweets did him in? There are a lot of tweets to choose from, but the district cited tweets related to this radio show broadcast where he complained about the state making Shorewood High School change its offensive Native American mascot.

Great news for my very sweet 11-year-old cousin named Finnley, who lives in Florida and has to interact with anti-vaxxing cop-demons on the daily: A panel of advisors for the US Food and Drug Administration endorsed Pfizer’s low-dose COVID-19 vaccine for 5- to 11-year-olds on Tuesday, paving the way for the FDA to decide on the kid-sized shots later this week. If approved, the Centers for Disease Control and Prevention would also be faced with whether to recommend the youth vaccines next week.

Hannah Krieg has some highlights from last weekend's Seattle and King County Debate-o-Rama: (You know there's an election going on, yeah?)

In the homestretch of the campaign trail, the candidates seem to have developed a slightly more ravenous taste for blood.

[King County Executive Dow] Constantine bit back when [Joe] Nguyen criticized the incumbent's support of a larger youth prison. Republican city attorney candidate Ann Davison, who pulled out of the debate last-minute, was still present in spirit as [Nicole] Thomas-Kennedy faced a debate-turned-questionnaire-turned-accusation from Davison’s camp. [Nikkita] Oliver, on several occasions, absolutely bodied [Sara] Nelson. And — in classic Seattle style — the mayoral candidates talked about [Lorena] González's recent attack ad without actually talking about it at all.

In short, there sure were some zingers this weekend.

If the deluge of Facebook-related stories this week has you scratching your head, here is an explainer from AP on how media outlets coordinated to cover “The Facebook Papers.”

On that note, The Facebook Papers revealed that while the company had the tools and techniques to combat vaccine misinformation earlier this year, they decided not to because it could have lowered engagement on the social networking site and impacted company profits.

Scott Greenstone at Seattle Times reports that the King County Regional Homelessness Authority's first major proposal is a $27 million dollar project that would create new facilities and outreach specifically in downtown Seattle. Most of that proposal $$$ would go toward a 150-bed “high acuity” facility "that would serve the people often seen wandering downtown in distress, dealing with significant psychiatric issues compounded by use of drugs like methamphetamine." Where are we going to get the $$$ for that proposal? Some people might propose...

Big tech: Microsoft just had its most profitable quarter ever. Karen Weise with the New York Times reports that the Eastside company "said revenue in the three months ended in September hit $45.3 billion, up 22% from a year earlier. Profit rose 48% to $20.5 billion."

Let's stay in Japan for a sec to recommend a fun Japanese Halloween-y movie, One Cut of the Dead. You've probably stumbled on this colorful zombie flick if you're a subscriber of the horror streaming service Shudder—it's one of the platform's best offerings. Put it on your watchlist this week if you haven't seen it. The trailer:

I had to triple-read this update from the cops:

Additional info: there were no children or other passengers on the school bus. There will be many scenes disrupting traffic in those neighborhoods for some time. Officers are still investigating this incident. We will provide more info as it becomes available.
— Seattle Police Dept. (@SeattlePD) October 26, 2021

KING 5 says the man is "believed to be a bus service employee who is not authorized to drive buses." ICYMI: The bus drivers are hiring.

Trust no gun: The assistant director who gave Alec Baldwin the gun that killed cinematographer Halyna Hutchins on the set of “Rust” last week was previously fired from a 2019 film set after a gun unexpectedly discharged. Authorities have not charged anyone for the death of Halyna or injury of director Joel Souza, but criminal charges have not been ruled out.

Republican media and corporate interests are working overtime to control the narrative of this election. As City Attorney, I will defend Seattle from big business greed while implementing a smarter approach to crime reduction. Vote by Nov 2nd. #VoteNTK pic.twitter.com/tiX8VIxKbU
— Nicole Thomas-Kennedy for Sea City Attorney (@ntkallday) October 26, 2021 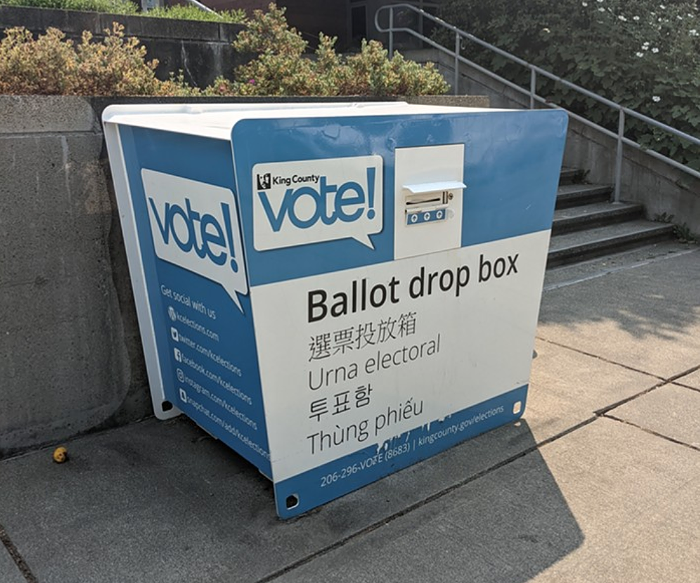 Slog AM: Cost of Eggs Soaring, Boeing Plane Breaks in Half, Seattle Houses Are Making More Money Than People