Mac DeMarco's 2 is ten years old and I feel ancient.

Greg Scruggs said that Chong the Nomad dominated Day In Day Out last year. Eric Tra/Day In Day Out Fest
Last week it was THING. Earlier this month it was Capitol Hill Block Party. Today it's Day In Day Out. It's only March 1, but the festival season is on my mind.

After its debut festival filled in for Bumbershoot over Labor Day weekend last year, Day In Day Out (DIDO) is back for its second year—and expanding to three days. From August 12-14 at the Fisher Green Pavilion inside Seattle Center, festivalgoers can sprawl out in the late summer sun and listen to music that reminds them of being a freshman in college, a freshman in high school, or wherever they were ten years ago. Put on by Daydream State, the folks also behind Capitol Hill Block Party, DIDO wanted to make sure this fest had its own specific vibe distinct from Block Party.

“I think anyone who looks at the lineups will see that both DIDO and Block Party have their own unique identity,” said Daydream State talent buyer Evan Johnson in today's announcement. “What they have in common is that they both feature a mix of national and local artists performing at accessible venues in the heart of Seattle."

DIDO's lineup looks like it was specifically engineered to capture a particular kind of millennial indie nostalgia. Headlining the fest are The National and Mitski, fresh off the release of her sixth album Laurel Hell and requesting people to get off their damn phones at her shows. Pepperoni Playboy and headliner Mac DeMarco will celebrate the TENTH anniversary of his albums Rock and Roll Nightclub and 2 during his set, which makes me feel old. Salad days no more, amirite? 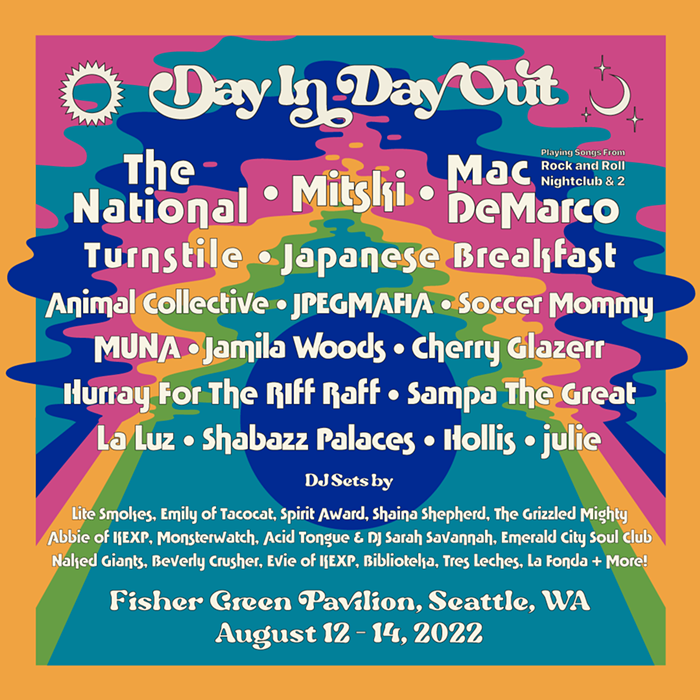 Le full lineup in poster form. Day In Day Out Fest
A new feature for this year: DIDO has also assembled 15 local DJs like Emily of Tacocat, Spirit Award, Abbie of KEXP, and Emerald City Soul Club to play sets between acts. There will be an all-ages viewing lawn where everyone can enjoy the fest, as well as a 21+ VIP lounge deck, an outdoor beer garden, and food trucks to fuel up. Festival organizers are partnering up with The Vera Project, Barboza, and Neumos to host to-be-announced afterparties. We'll let you know more as we know more.

VIP and three-day passes go on sale Friday, March 4 at 10 a.m. on Day In Day Out's site, where you can find more updates.

Here's the full lineup of bands and DJs: