Same with Plenty and Woops!

Executive producer Michael Stipe said the Velvet Goldmine is about how “you can create and re-create your own identity, as flamboyantly as you wish, from day to day.” Miramax
Unstreamable is a weekly* column that finds films and TV shows you can't watch on streaming services in the United States.

*We skipped the column last week since Chase was out sick with COVID. He's feeling much better! 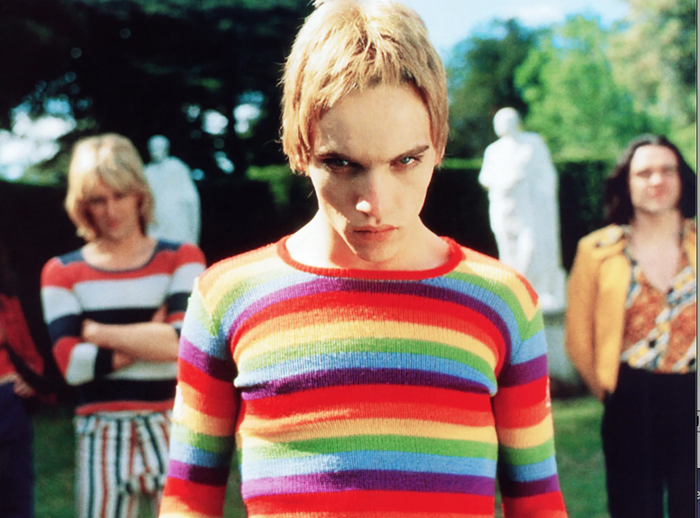 There's a ton of a top-notch original music in the film's soundtrack. Meyers and McGregor did their own live singing. Miramax
Todd Haynes’ Velvet Goldmine is a story of the life and death of glam rock refracted across a thousand specks of glitter. Conceived initially as a fanciful biopic of David Bowie, the Thin White Duke refused to give Haynes his blessing or the rights to use his music. Thus the Ziggy Stardust-like bisexual androgyne at the center of the film, Brian Slade (played with ferocious intensity by Jonathan Rhys Meyers), became an amalgamation of Bowie, Bryan Ferry, Marc Bolan, Brian Eno, and the like.

But make no mistake, Bowie’s presence looms heavy over the film. From its title (a Bowie B-side) to Slade’s chaotic marriage to Toni Collette’s Mandy (similar to Bowie’s first wife Angela) to his relationship with sexually fluid American rocker Curt Wild (Ewan McGregor in an electrically perverse performance, lightly based on Iggy Pop and Lou Reed). Haynes even threads in writer Oscar Wilde, creating a history where the epic homo is an extraterrestrial who also happened to be the first glam rock star. (Apparently much of the dialogue comes from Wilde's writing, so it's only fair).

Told in a non-linear fashion, Haynes situates these characters within a storyline set 10 years after Slade faked his death. Journalist and former Slade stan Arthur (Christian Bale) is tasked with figuring out what exactly happened to the glam rocker, wading through the real and fake. Velvet Goldmine is a splendid, queer, fantastical, and deeply personal re-telling of one of the gayest (at least in appearances) and messiest times in rock music history. JAS KEIMIG 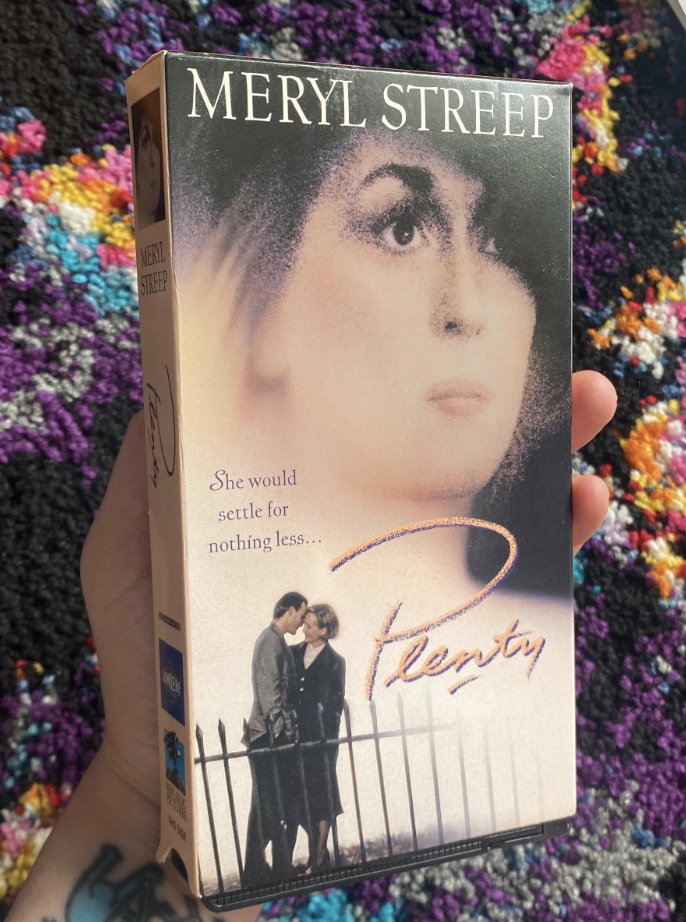 "PLENTY: She would settle for nothing less..." 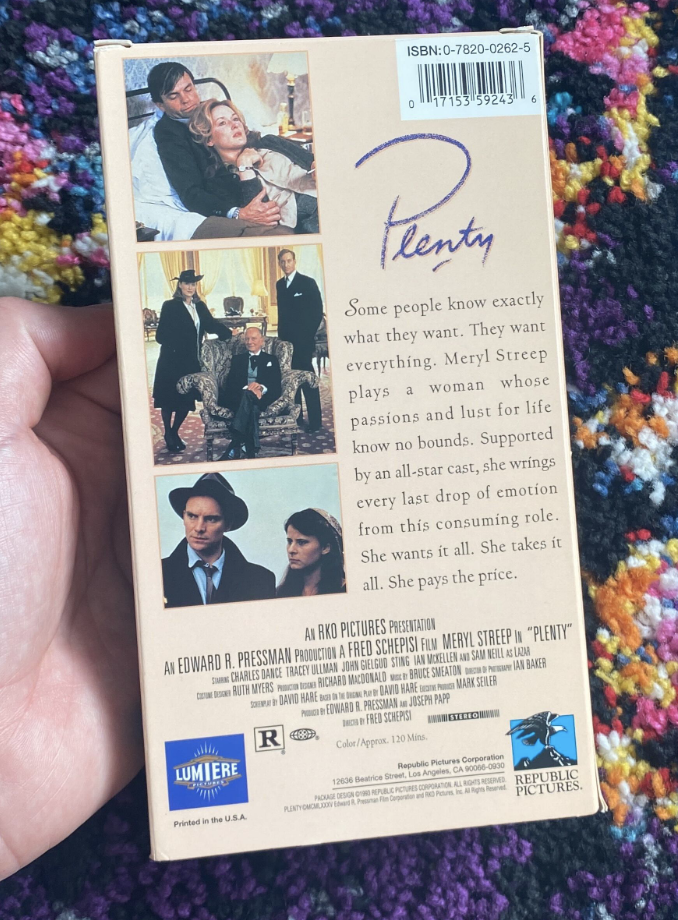 This copy...
I've tried to write about this movie for so long. I found it on VHS at Goodwill a few years ago and bought it after being impressed by its dramatic promo copy. ("Some people know exactly what they want. They want everything.") Originally a David Hare play, this period piece set in postwar Britain features plenty of famous people (Streep, Ullman, Gielgud, Sting, Neill, McKellen). They act at their most subtle and huffy, probably to honor Gielgud, a legend among actors. (This is the only film Streep and Gielgud are in together.) I finally watched the tape a few months ago, and I was... not a fan.

Streep opens the movie as a scrappy fighter in the French Resistance—and that's exciting! She delivers an early monologue with beats so full and nimble that teachers should analyze it for their introductory acting classes. But the juicy wartime parts quickly wrap up, and the film's two-hour core focuses on Streep's character's postwar life, which is pointedly boring. I put the tape down and moved on.

After I complained about Plenty, an Unstreamable reader responded that it's one of his favorite Streep films. I decided to give it another chance, and my second viewing was better. It really is a prime example of why people love Streep's acting style. She creates tension by giving the camera a taut, stoic face and contrasting that face against her eyes, which reveal a deep, unsettled backstory. This tension—stoic face; emotive eyes—is copied as the gold standard of film acting. It's all very technical and good! Still, most of this movie feels like a play, and movies should never feel like plays. CHASE BURNS 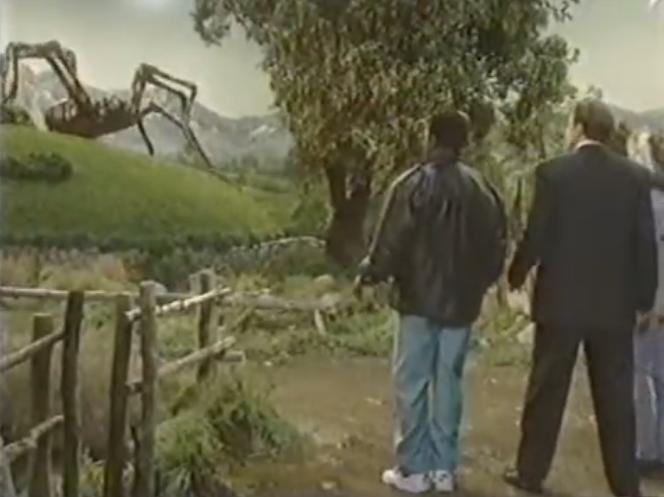 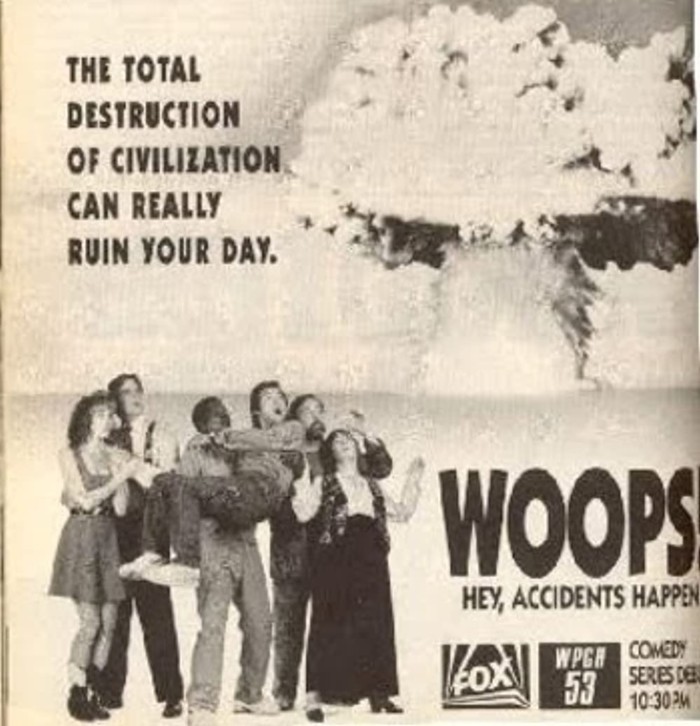 The saddest jokes are the ones that are too smart for the room, like this Charles Pierce appearance before an audience of heterosexuals who barely seem to know what Bette Davis is. A similar tragedy seems to have befallen Woops! a transfixingly strange sitcom about the almost-end of the world that lasted but a few weeks on Fox in 1992.

The premise of the show is that the survivors of a nuclear armageddon have gathered in a cabin and must forge ahead with human existence despite barely being able to tolerate each other. Comedy is mined in the juxtaposition of a deeply unsettling reality with traditional sitcom tropes (an engine used to even more unsettling effect on the justifiably-unstreamable Heil Honey I’m Home!) but somewhere along the line the show seems to have had its sharpest claws filed down.

I suspect that this is another sad case of network interference. I interviewed one of the show's writers, Richard Day (Arrested Development), about this show (he was excited to work on something that wasn’t another retread of the same old domestic sitcoms of the time) and there was definitely reluctance on the part of executives to allow the show to live up to its bizarre potential. In hindsight, I think it came at the wrong time — in the early '90s, the furthest you could push the boundaries of the sitcom was Married with Children. We needed Malcolm in the Middle to announce the arrival of single-cam laugh-track-free network comedy. I wouldn’t mind seeing this one re-attempted, but until then you can find some episodes on YouTube. MATT BAUME

These aliens would like you to stop stealing their eggs, grandpa. Cocoon
Ron Howard's 1985 sentimental sci-fi blockbuster Cocoon follows a group of senior citizens who break into their neighbor's pool and discover magical eggs in the bottom of it. Set in St. Petersburg, Florida, these are the type of old people who would now vote for Trump and threaten to shoot you if you stole their magical eggs. But it's 1985 and the Fox News hypocrisy would not set in for another decade. So, these looters get their eggs and they learn what the dolphins in Tampa Bay have apparently known for millenniums: These alien eggs, which have gathered power for ~10,000 years at the bottom of Tampa Bay, give you eternal life. They also make you horny. Lots of old-people fucking in this film.

Having grown up in St. Pete, I was raised among retired snowbirds who felt they were living out Cocoon's promise. I'm sure they thought "there's some magic in the Tampa Bay" while buying up all the coastal property and fucking. What puzzles me about Cocoon isn't its magic eggs or its squeaky dolphins or its hot little alien bodies, but why its aliens are so chill when these burnt senior citizens steal their 10,000-year-old ancestors' energy. If you came back to Earth to retrieve your ancestors only to find out Wilford Brimley stole their mana, would you be chill about it?! I wouldn't!! CHASE BURNS

Available for rental on DVD at Scarecrow Video and Netflix DVD. Streaming on Xfinity Stream.