[Posted yesterday; reposted now for the hell of it.]

When I heard that the Washington State Liquor Control Board—which long ago outlived its uselessness—was doing all it could to shut down the Eagle, a dark & dirty gay bar that's been on Capitol Hill for 25+ years, I was annoyed. Why was the LCB—in cahoots with the SPD—trying to shut down what would, in any other city, be a tolerated/beloved dark & dirty institution? It might not be a place that the mayor would take visiting dignitaries, but it wouldn't be a place that the city and state would spend tens of thousands of your tax dollars trying to shut down. Then I saw exhibit A in the LCB's case against the Eagle: 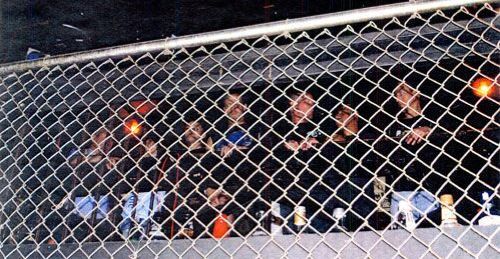 Disgusting, right? But in all honestly my first reaction was typical knee-jerk Seattle liberal stuff. "Thanks to the hard work of the LCB," I grumbled to one of my coworkers, "more people will have seen this dude's dick—in the LCB's report, on our website when I post it—than would've seen it if that dude had spent the whole summer waggling it over the balcony at the Eagle. Our tax dollars at work!"

But a journalist is trained to look at issues impartially. (At least that's what trained journalists are always telling me.) So I decided to take a step back and consider the full implications of dicks in bars like the Eagle. Yes, one could argue that trying to shut down the Eagle—and throw bartenders and barbacks out of work—is a huge waste of public money and manpower. One could point out that the same state that paid an LCB agent to sniff out cock at the Eagle just kicked 40,000 people off the state health insurance rolls to close a budget gap. One might be tempted to mention that the same state disseminating cock shots via public records is slashing funding for higher education. And one might be so petty as to point out the brazen disregard for state law displayed by an agent of the state here: the man on the balcony at the Eagle is wearing a Utilikilt and "up-skirt photography" is illegal in Washington state.

But what about people who don't want to see dick at the Eagle? Imagine an innocent patron with no interest in dick innocently enjoying his beer at the Eagle. If he had looked up at just the wrong moment—say the moment the LCB agent's camera's flash went off—that innocent Eagle patron would've been exposed to dick whether he liked dick or not.

I can hear you snickering. But it's just not fair to assume that every man who goes to the Eagle likes dick. Don't stereotype gay men like that. Not all of us like dick. Some of us like opera. And, yes, the Eagle is a dark & dirty gay bar and everyone who enters it—and you have to be at least 21 to enter the Eagle—knows what the place is like. But if even one Eagle patron was exposed to dick against his will, well, we can all agree that that would be one Eagle patron exposed to dick too many.

After I came around to the Liquor Control Board's POV on this—dicks in bars are menace and preventing dicks in bars is a wise use of public funds—I began to wonder if dicks were a problem at other bars in the area. To find out I went on a bar crawl yesterday during happy hour and what do you know? I saw dick pretty much everywhere I went. And I took pictures. Now I want our website to be SFW—unlike the NSFW reports the LCB cranks out—so I've covered up the dicks in these shocking photos with the faces of the unsung heroes working hard to protect us all from dicks in bars. Lorraine Lee, Roger Hoen, Ruthann Kurose are the three sitting members of the Washington State Liquor Control Board. You can read more about their thrilling exploits here and you can email them here to thank them for protecting you from the sight of dicks in bars and on blogs. (But the NSFW versions of these photos can be found after the jump for any dick fans out there.) Here we go...

Dick at O'Asian, a bar across the street from City Hall popular with city hall staffers: 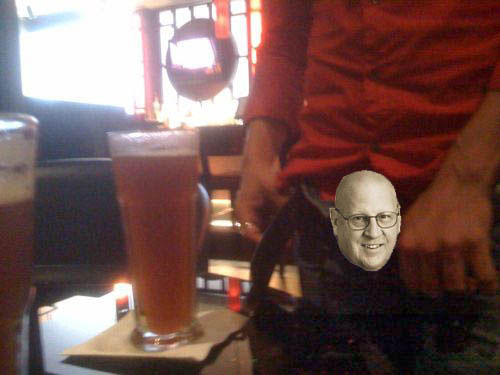 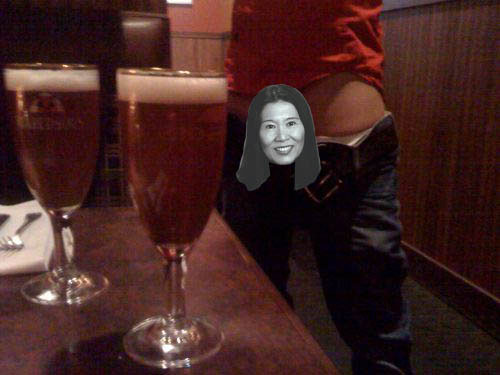 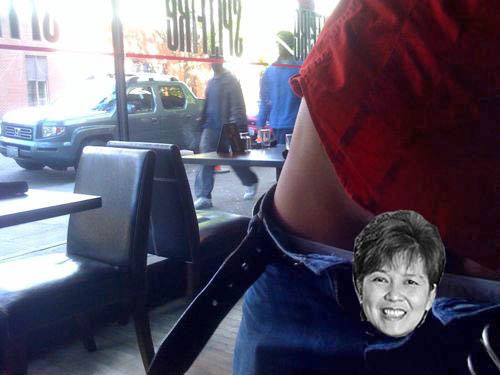 I have to say that I was shocked—shocked—by all the dick I found running around town yesterday. (And I was shocked when I got back to work and downloaded the photos and realized that all the dick I saw seemed belong to the same dude. I think this dude might be stalking me.) But what shocked me most was the fact that not once, not in any of these bars, did the staff seem to notice or care that an innocent patron—me!—was being exposed to so much dick. Not even at Spitfire, where the dick was exposed by the windows. Innocent passersby could see it! I thought about going to the LCB's website and filng a complaint when I realized that I was right across the street for city hall. So I rushed to council chambers to speak with my elected representatives about all these dicks everywhere and—no way! 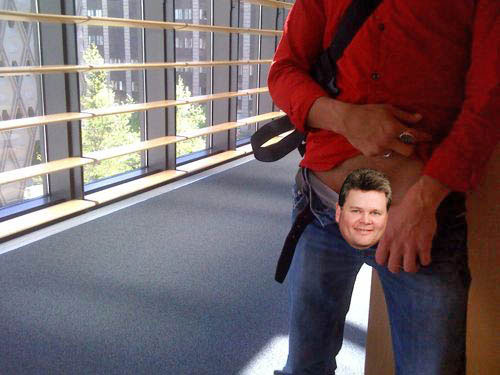 Dicks in city hall? Right outside council chambers? Is nowhere safe from this growing menace? And what about the children?

Before I went out yesterday and investigated the dicks overrunning our city I might've argued that bars—gay and otherwise—are open to the general public and a bar's owner and staff can't realistically be expected to police the behavior of all of their patrons at every single moment. Now I know better. The sheer amount of dick in our bars is shocking and I am now convinced that the LCB and the SPD must act to protect us all. But they can't fight this fight alone. That's why I'm deputizing you, Slog readers, to help me and the Liquor Control Board and the Seattle Police Department beat back these dicks off before its too late. LCB agents and SPD officers can't be everywhere. So if you see a dick in a bar do something: Take a picture of that dick and email it to me. I will share your dick pics with the brave men and women of the LCB.

Of course if we find dicks in every bar in the city that will put the LCB in a difficult position indeed. If there are dicks everywhere and not just in a dark & dirty gay bar on Capitol Hill—dicks at the lobby bar at the downtown Sheraton, dicks at Fox Sports Grill, dicks at the Wildrose—then the LCB will be faced with the prospect of shutting down every bar, restaurant, and tavern in the city. And I can't imagine that they'll do that. But it's a risk we'll have to run because we can't have dicks in bars. So go out, watch for dick, and if you see dick—or if your dick slips out of your trousers—take a picture and email it to me.

Together we can make Seattle's gay bars safe for women and children. 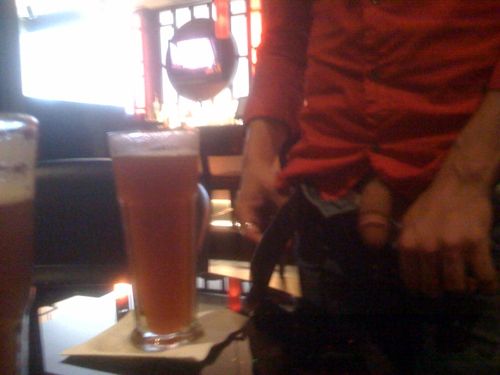 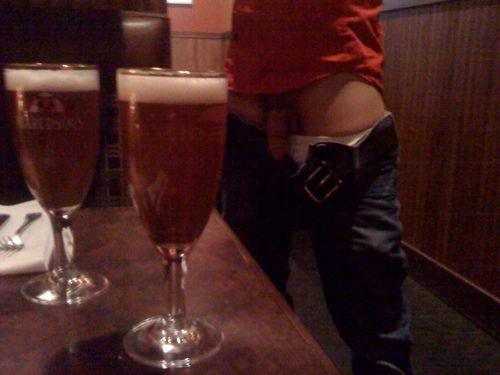 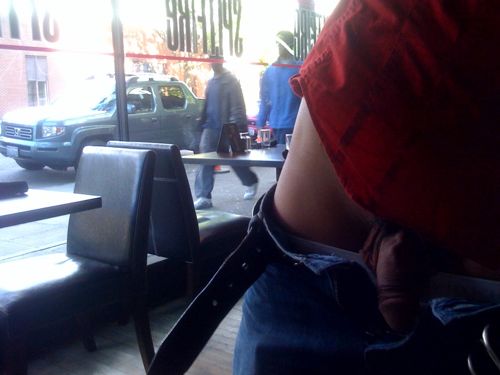 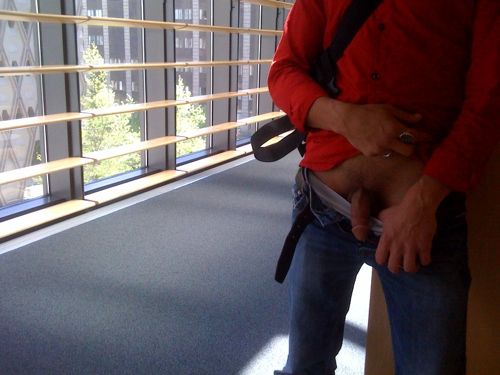